Rowing Projects: When U Instagram My Dead Body, Use Walden But Tag It #NoFilter (until 5th November 2016)

For this fun and captivating exhibition, English artist Andy Holden collaborates with Steve Roggenbuck, a poet and blogger from the USA to formulate interesting ideas about the potential of the self in the selfie generation. Works in the space are presented in a loud and bold manner, filled with objects, colour and sound, the latter courtesy of Roggenbuck's monologue videos. Rowing, N16, is a fairly small space, but the concentration of art in this way is highly suitable for this particular show, as while some parts present novel and amusing effects, viewed together, the pieces emit a stronger, far more poignant meaning.

There is a strong feeling in 'When U Instagram My Dead Body...' that the artists are challenged, frustrated and indeed driven, by modern man's loss of affinity with its natural environment, and in many works this is expressed rather explicitly, such as Roggenbuck's video with a sound which dominates the space, 'I Am Not Responsible for Anything the Moon Does This Month'. The piece boasts an impressive combination of being both entertaining and deeply serious. It is clear that the values of which Roggenbuck speaks are very dear to him, but as a blogger he is determined to address the YouTube and social media crowd, whose inherent egotism plays a large part in the environmental crises we face. Equally, some of the digestible quotes from the film piece are very much in line with viral slogans that are commonplace on social media, such as "life itself is impossible" and "the mind/body problem is not a problem". Using these phrases breaks down the exhibition's ideas, and sets the film as a sure-fire primer to the rest of the show. 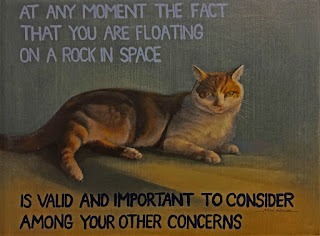 With diverse media ranging from video, prints, sculptural installation and painting, each work arrests the viewer in a different way; perhaps the most obvious is the '666' painting installation, which is just the three numbers painted directly onto the wall at the back of the gallery. While clearly contrived in its confrontational nature through its reference to 'The Number of the Beast', its ability to grab the viewer's attention and maintain it is surely powerful, which is only enhanced by its similarities to legitimate street art or illegal vandalism.

The series of collaborative macro paintings found near the back of the gallery is comparable to the contemporary oeuvre of Magda Archer, whose work uses cute imagery including fluffy cartoon animals alongside phrases such as 'I hate my life'. Paintings found in 'When U Instagram My Body...', however, seem to echo the ideas and pseudo-philosophical themes from the various videos, which certainly speak to a wide, if not young and active, audience based on their accessibility and textual elements. Each work has hints of existentialism and more general insecurities, while using a traditional, figurative painting style. 'Attention People...' is a personal favourite, wearing the slogan: "Attention people who don't think you are doing enough: you are beautiful for having that fear". The piece again provokes responses from the viewer regarding social change, particularly the social element of global warming. 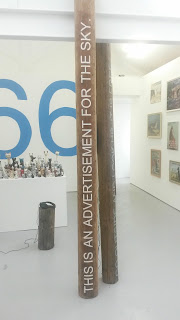 
As the exhibition space is rather small and the works are forthright, confrontational and fast-paced, the viewer truly feels like they are part of something active, especially through the media of video disseminated via the internet, where media has the potential to go viral and be accessed by many globally. Ultimately the artists want us to be aware that this consciousness is not enough, especially in its inert form. Making changes to our lifestyles and choices creates the real difference. Using both their own personal strengths as artists while also investigating ways to engage with their viewers is a strong way of delivering their message and allowing for subjective interpretation. Once viewed together as a whole, the show is thoroughly enjoyable and entertaining, in addition to being motivational for collective social change.