In the brightly lit gallery of Carlos/Ishikawa, E1, lies the work of New York-based artist Darja Bajagić, whose practice adopts a highly confrontational style which is amplified in the sterile white space at Carlos/Ishikawa. With less of a traditional narrative than some shows, the use of text and photography together showcases the potential of the viewer using their own initiative to create their own gallery experience.

As soon as the viewer enters the space, we are met with enlarged faces of three female subjects; we are informed that they are Bianca Brust, Maddy O'Reilly and Kali Michaels. With such intimidatingly large faces bordered with a custom wooden frame, it is certainly clear that the artist wishes to highlight the ways in which women are judged, criticised and generally observed as a result of their 'face value', or mere aesthetic presence. I must admit that a brief bout of research followed my visit to the show, as I was not aware of any of the three women featured in the installation, but I am certainly glad that I did endeavour to do so, as the results retroactively add a great deal to my experience. Kali Michaels and Maddy O'Reilly garnered results of porn websites and social media accounts, as might have been anticipated by the representation of Michaels, as pictured below. Using models and actresses from the adult industry highlights Bajagić's critique on female stereotypes and archaic expectations as submissive sex objects. 'Nobody Knows I'm Funny' as a title is rather powerful as a means of implying how women are expected to behave a certain way, and express themselves through shallow means such as fashion and make-up.

The first face of the almost-triptych here is that of Bianca Brust, which again demanded a little online research after encountering the piece. Ambiguous in its physical features, Brust's face is on the borderline of being disturbing prior to the knowledge that is provided by the artist's accompanying guidebook. However it is the internet search results which drastically enhance the understanding of her inclusion in Bajagić's work, especially alongside the faces of Michaels and O'Reilly. Brust was brutally murdered by Matthias Schoormann in 2008 after turning down his romantic advances multiple times. The case gained notoriety due to Schoormann decapitating Brust before modelling her body and posting photographic evidence in an online forum. He then travelled in his car with his victim's head in a rucksack before committing suicide by hurtling into a van at high speed. From Schoormann becoming sexually, or romantically, obsessed with Rust, the link between sexuality and violence is one that is difficult to convey appropriately in contemporary art, yet Bajagić has done a fantastic job of getting these victims names [back] into the public consciousness through these image reproductions.


'Nobody Knows I'm Funny' is split into two segments, both physically in their curation and in their aesthetic similarities. Using an authentic, homemade artistic technique for the pieces 'Humans! Are You Afraid of Being Who You Are?' and 'Do You Like Making Life Hard for Yourself?' is confrontational from the point of departure of their titles, using provocative direct interaction with the viewer through the second person narrative, in addition to punctuation which heightens the tone. 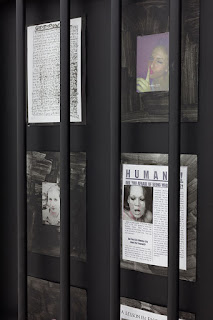 The complex relationship between sexuality and violence is continued in the final aforementioned pieces, and the female visage becomes a symbol of intense scrutiny, alienation and marginalisation, both in society and the adult entertainment industry, the two which are certainly not mutually exclusive. Bajagić's use of an aluminium frame and bars crossing over the two collage-style works marks this again, alluding to the entrapment of women within the patriarchal ideals. Although small in quantity, the works featured at Carlos/Ishikawa are bold enough to arrest our attention; the inclusion of a guidebook enhances the viewing experience and allows the viewer to take more than a memory of the artist's analysis home. Merging disturbing imagery and histories aesthetically is a challenge to both artist and viewer, however beyond the horror there lies recurring themes prevalent in contemporary, and indeed historical, feminist discourse. Bajagić's work in 'Nobody Knows I'm Funny' serves to highlight the dynamic political stance of the feminist movement's current multifaceted state.