Sid Motion Gallery, N1, enjoys a wonderful location in the ever-rising King's Cross, and its placement in between independent retail outlets is a hopeful symbol of progress towards greater public accessibility to contemporary art. '12 Conversations', the gallery's second show since opening earlier this year, continues this idea of accessibility and public consumption, primarily due to artist Morgan Wills' use of familiar modern art historical aesthetics, expressing clear influences from Henri Matisse, Edvard Munch, Julian Opie, the Surrealism movement and even Auguste Rodin. In doing so, Wills delivers to his audience not only a journey into current trends and issues in contemporary art, but an introduction into icons from the twentieth century.

Perhaps the first thing of note about this body of work is the highly digestible, aesthetically pleasing palettes used by the artist. Embracing block colour sees Wills' work venture towards pop art, but it would not be true to classify these paintings in such a way, as '12 Conversations', like much of contemporary art, sees influences and styles vary, showcasing a diverse practice rather than one which follows a single school of thought. As the first painting of the show, 'Putting My Foot in It' uses colloquial metaphor to entice the viewer, in addition to the somewhat banal imagery of a foot and a face. However it is the overlapping of the two features which enhances the painting as complex and truly compelling, as we can infer the artist's first nod to the oeuvre of Edvard Munch, with the sinister and ambiguous expression on the face of the figure. 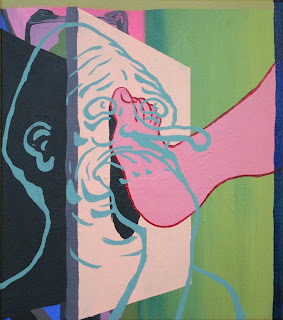 It is clear that Wills' outlook is merging an almost charming aesthetic with darker undertones, and often deciphering these strata can take genuine focus on the work, which at a time of instant gratification, scrolling through timelines and swiping, is refreshing and exciting for the viewer. This intelligent way of incorporating Surrealist themes and ideas is more challenging than the initial visual impact would suggest, again incorporating simple and dark, multifaceted ideas concurrently. Recognisable artistic influences continue in 'Crouching Nude with Ropes', another painting using warm and bold hues to pique the viewer's interest. The soft curves of the blank figure channel not only the print work of Matisse, but intriguingly bears similarities to Rodin's iconic sculpture, 'The Thinker'. Omitting any specific facial or bodily features informs us that the figure is that of any or all in the human race, gesturing a humble and perhaps broken spirit through body language. Using body language as a further mode of expression shows again the various ways in which the artist is able to communicate his ideas through partial abstraction. 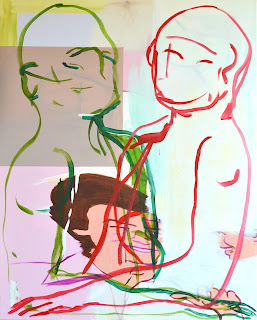 As one of the larger paintings in the exhibition, 'The Ambassadors' is certainly a significant point of discussion. Evoking ideas of international relations and hierarchies, the image is one that should speak to the people more than ever. As opposed to the distinct face depicted in 'Putting My Foot in It', the symbol of the faceless figure emerges again, but to a different effect than that seen in the previous painting. The paradox of intimacy and distance is played out in this work, as the single lines of the two figures overlap and blend together; placing a third face between them, bearing a villain-like, almost malevolent smile, suggests a critique on patriarchal customs, white supremacy and corporate domination.

It is at the point of encountering 'The Ambassadors' that it becomes evident that Wills is providing an insight and subsequent critique on the state of mankind's relationship with its own society, and the ways in which we are all bound to its ways. The glossy, jovial impact of the colour palettes are reminiscent of salient themes dealing with conflicts between face-value and deeper meaning, such as patriotism and the media, while the underlying complexity of the various paintings makes the viewer question both internal and external conflicts on these issues. 'Seated Nude with Legs' neatly divides the simplified and the real, or grotesque, features we often attempt to overlook. The title of the work highlights influences from modern art, but subverts the traditional nude so to supersede ideas of sexualisation, commodification or objectification. Expressing further influences from Matisse and, to a limited extent, Francis Bacon, grotesque social elements of the everyday, such as discrimination and global crises, are implied through the artist's use of binary, in 'Seated Nude with Legs' and throughout the exhibition. 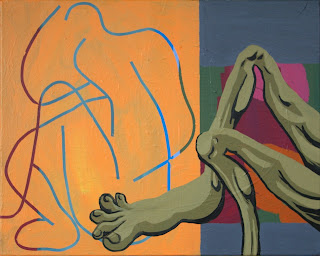