With little conextual detail provided prior to visiting the exhibition at Herald St, E2, a gallery named after its specific location, this latest body of work by New York-based artist Nick Relph looks at the minutiae of urban living and planning. Including two distinct series of works, the viewer is transported to what appears to be a virtual reality of city life, whether it be New York, Paris, or another in the viewer's mind.

Triggering this journey first is 'Glorifying the American Girl', a large C-print with a title which instantly personifies the architectural subject matter of the piece, as we are presented with a skyscraper so tall that none of its surroundings meet its height. This is such that the viewer becomes aware of the possibility that the image has been digitally altered. Aside from this, the patriarchal tradition of building higher and higher towards the sky (with design media often reporting on and retorting against the world's "next tallest building" etc.) is parodied in 'Glorifying the American Girl', with a chunk of the middle of the building replaced with a large white vacuum of a square. 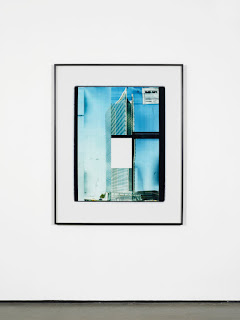 
While architecture plays a significant role in the untitled show, there is also a rather curious series, featuring three works titled 'Eclipse', 'Extra' and 'Orbit' respectively. Each is comprised of cotton, colour photocopy on acetate and a frame, with the cotton loosely overlapping the frame and reaching towards the viewer. The media is not the only element uniting the three works, as they all feature the motif of a phone, which appears to have been embroided onto the page but is in fact a colour photocopy. Relph's commentary on our dependence on technology and how it is engrained in us both habitually and often physically, with phones rarely leaving our sides, becomes evident, and the repetitive use of the phone is an effectively jarring continuity in the exhibition, especially as works outside the series are crisp, defined and aesthetically pleasing. 'Eclipse', in particular, showcases the iconography of the phone and little else; by the end of the exhibition we feel bombarded with its presence, much like the claustrophobic ability to be in constant communication through the device.

The second intriguing mini-series involves three cibachrome pieces titled 'Anti Gate', 'Not Gate' and 'No Gate' respectively, where pieces of fabric were stretched and magnified, exposing tears in their constitution. Lacking in direct context, each work entices the viewer with rich aesthetic vibrancy and ambiguity as to what lies behind the breaks in each fabric. Again, with 'Anti Gate', we see the use of familiar symbolism with Relph's use of denim as the primary background, or focus, of the work. As such, a rip in denim is highly banal, yet observing the intricacy of the material in this way allows a fresh perspective on the many different materials comprising our daily lives. 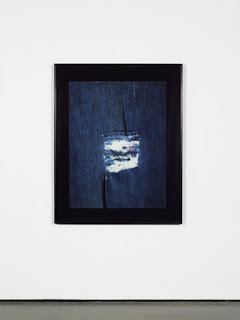 Aside from subjective aesthetic value, Relph's use of architecture [visualisation] is highly interesting and has the power to pull everything in the exhibition together. By showcasing buildings in isolation, we see nods to the JG Ballard novel 'High Rise', as well as an expression of how microcosms work on different scales, from the fabric of one's clothes to the spaces in which we live.  One of these images is 'Irene', a C-print which depicts a visualisation of a dark, computer-generated complex, with an intersection of three streets, much like an old-school video game. As the image is evidently manipulated, and CMYK samples remain throughout, a bizarre mystique forms around how the image has been composed.

A lack of direct, or explicit, communication from artist to viewer allows the inclusion of our own thoughts and experiences, adding personal value to the works. The exhibition's final curated work, 'Paris', shows a fairly generic high rise complex, certainly indecipherable as Parisian; avoiding traditional or vernacular stylings in each of his examples, Relph creates an anonymous yet open urban landscape for his viewers to access with extends throughout the exhibition as we piece together fragments of a global city. Ultimately, showing the artist's work in London only serves to ignite these ideas. 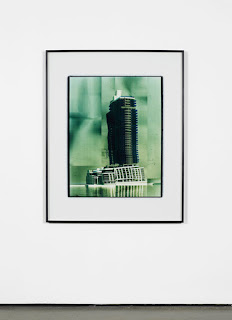