Shock and mild repulsion are universal, if not lazy, reactions to this body of work by Welsh artist Wendy Mayer, but the sculptures featured in 'Curious Room' certainly evoke a chilling and highly personal response which will undoubtedly vary with each viewer. Hyperrealism is practiced in Mayer's work, with startling vinyl figures of babies' heads incorporated into various domestic objects, including an oil can and a vase. The coming together of two objects (both highly recognisable, one banal) forms a collection which is at once disconcerting and compelling, for the reason that, at face value, the viewer demands explanation of the performative aspect of the work.

Charlie Smith London, EC1V, has put together a show which focuses heavily on sculptural work and pushes it to its limits, as hyperrealism is often able to do. As aforementioned, it is clear that the artist's practice is saturated with personal, perhaps scarring, memories and trapped emotions, whether these are Mayer's own or drawn from external inspiration. In 'Cocoon', the first sculpture merging vinyl and ceramics, an artificial head is held within a ceramic vase bearing the design of a shell, suggesting a strong binding relationship between mankind and nature. In fact the intensity of the piece combined with the almost suffocating closeness with which the head is fixed to the vase implies that there is a kind of metamorphosis afoot, yet the identity and physicality of the figure is frozen in time. It then becomes clear that the artist is playing with the idea of memories transcending through time and affecting the individual's own future by incorporating the past. 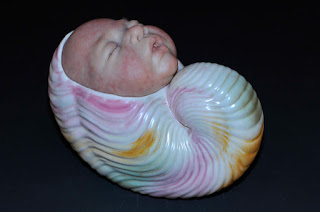 While the exhibition is sculpture-heavy, 'Land of Our Fathers' adds a further dimension to the show which allows the viewer to really enter Mayer's thought process. A papier maché and wax setup, bearing great resemblances to the rest of the show with the inclusion of painted vinyl faces engulfed in gold pillars, a small theatre stage is the setup for a performance of a musical interlude, using a pipe organ track, which is potentially longer in length than necessary, but certainly adds both unity and further complexity to the exhibition as a whole. The sound piece is frantic and often sporadic, mirrored by an element of the piece which repeatedly transfixes the viewer: two golden faces between the gold pillars which are highly similar to those already seen in the sculptural works, but have a distressed facial expression which adds a new stratum of intrigue to the show, as again they visually articulate bold emotions yet are frozen in time and are at the mercy of the artist. Whereas often the viewer has some level of autonomy in comprehending an artwork, 'Curious Room' is very much a public expression of Mayer's private space.

Some abstract ideas or metaphors in the show are rewarding to uncover, such as the 'Smotyn Du' series, showcasing five different vinyl faces, this time incorporated into a coat hanger and hung from a coat peg. Darkly resembling the crucifixion of Christ, the viewer is reminded of the fragility of human life and, in the context of 'Curious Room', the different tragedies and memories integral to each of these lives. Interestingly, especially given the heightened nature of the Black Lives Matter movement, there is no ethnic diversity within the series, which contains Blonde, Auburn, Dark (which is decidedly Caucasian), Brown (likewise) and Strawberry. 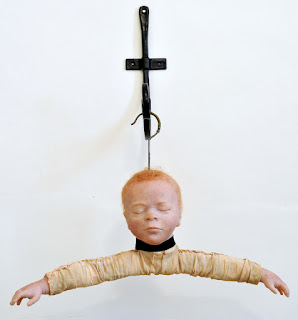 Perhaps the most poignant work is 'Little Bird', which is perhaps naively so due to its matte black structure comprising of ceramic, papier maché and feathers. A static, emotionless visage now loses much of its hyperreal aesthetic by being painted black and shaped like an urn. There is the feeling that this piece is intensely personal and acts as a memento mori, and while each work is compelling, there is less desire to investigate explicitly the reasoning behind 'Little Bird'. Ultimately this is prevalent throughout the show, despite the initial intrigue to understand why babies have been used as a motif. Thus this response is certainly bizarre in the world of contemporary art, where the urge to analyse and assess the context, theories and effects of each respective artwork is the prerogative of the viewer.