Tyburn Gallery: Mouna Karray 'Nobody Will Talk About Us' (until 21st May 2016)

Contemporary art commonly makes valiant attempts to address the world's most salient, often political issues. Globalisation, migration, capitalism and labour are a few of note, yet addressing true social and geographical desolation is a topic that borders on photojournalism. Hence, it is important that an artist covering such a theme does so in a mindful way which involves some kind of personal experience or otherwise active contribution. This is very much the driving force behind my visit to see Mouna Karray's body of work at Tyburn Gallery, W1U. The artist's textual documentation of her visit to southwestern Tunisia provides a bleak outline of its current geopolitical state, as she describes its "silent poverty, its mineral loneliness, its arid and forgotten soils whose foundations were rich with minerals". Symptoms of this existence would not occur by chance, yet its situation is being widely ignored by global media. Karray's photographic work depicts the daily life of this region, where there are no dramatic tales for a news base, just an evident persistence to move through its strife.

Each image is titled as the coordinates of its location, allowing the viewer to assess the content of the photograph closely as opposed to this being dictated by a title. At times during the exhibition, the need to remind oneself of the difference between general photography and an piece of contemporary art involving photography is required, as while they are all composed accordingly, it can become difficult to decipher between what is documentation and what is effectively contrived by the artist. The exhibition's first piece, '34°43'56.0"N 10°32'29.4"E' presents an unidentified, de-contextualised brick wall with a window-shaped hole in it; this motif of the seen and unseen, the distance between the interior space and an external world is recurrent in 'Nobody Will Talk About Us', and it serves as a highly poignant force in showing the viewer the solitude of being socially and culturally overlooked. It is in this piece that we first encounter another of the artist's motifs, a white sack with contents resembling body parts; it appears that a live body is inside, and it forms different shapes throughout the collection. Tyburn Gallery calls this figure a "restricted, anonymous subject", and its presence both with and without human figures is a haunting reminder of alienation and evokes an authentic feeling of estrangement. 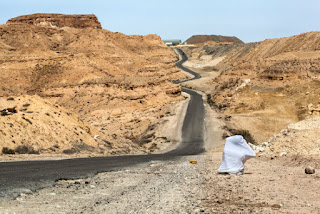 This same presence has a real apparition impact upon each piece, again reminding us of its status as an object of visual culture in addition to documenting the plight of the Tunisian community. Given that Karray is a Tunisian artist, the body of work, spanning three years, fortunately falls short of feeling voyeuristic and intrusive. Being within the space of Tyburn Gallery does alter the experience somewhat, in that its immaculate white interior and enviable central London location serves to emphasise the privilege of the viewer in contrast with the lives of the subjects in the photographic works. However, regarding each image individually, this seems a naive, perhaps pointless comparison when the themes present in the works are justified as a visual didactic apparatus for the gallery space. It is also important to note that there is not a pitiful, nor victim-like presence of the figure in these photographs; as the community is immersed in the depths  Knowing that this collection was formulated for the gallery experience helps comprehend the exhibition as a whole, and presents a conclusion of how relevant Karray's message is about alienated communities abroad, rather than imagery to trigger immediate and specific practical responses.

Ongoing reminders of the works as visual symbols continue with one of the show's final pieces, '34°20'59.2"N 8°20'11.7"E', which sees the artist's anonymous, ambiguous white packaged figure posited beside a similar white bag, presumably holding building waste. Here the symbolism of the binary effect is materialised, as the animate and inanimate are placed side by side, in addition to artist versus object, where we can see the manipulation of the image. Architectural elements of the landscape are reinforced as static and separate from the people inhabiting them, with backdrops of desolate, arid land accompanied by Karray's contribution in the form of the white bag. 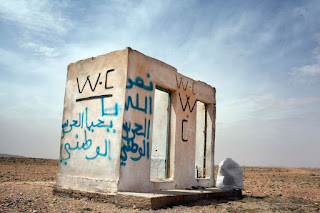 
The viewer finds his/herself asking questions and responding personally to each photographic work; is there life inside Karray's bag? If so, what does this mean for the people being photographed? A signifier of the unknown is a truly compelling addition to the exhibition, conveying the ambivalence of a global audience towards this seemingly fragmented society. The lack of investment in the area is stated as one of the reasons for this forgotten space, and a commercial gallery presenting this work opens up a dialogue between the Tunisian people, its governments, Karray and the audience in different ways, truly embracing the power of contemporary art.