NB: Castor Projects has re-located from New Cross to nearby Deptford.

For this solo exhibition at Castor Projects, SE14, London-based artist Kate McMillan presents a body of work incorporating sculpture, photography and video. The basement space itself is small with low ceilings and bright white walls, perhaps due to its newness, having only opening in January this year, thus allowing a stark concentration on the works on display. Being immersed in such a small exhibition vicinity really promotes the feeling that the viewer is connected to the various works, and suggests an affinity between human encounter and the synthetic pieces.

Each sculptural piece is 'Untitled', prompting an experience of pure freedom in observing and comprehending. In doing so, McMillan has set up the eponymous video, 'Stones for Dancing, Stones for Dying', to be the focal point for the viewer, which is enhanced by the enticing sound element accompanying the visuals. Prior to arriving at the film, we must encounter the recurring motif of plaster and bronze being used together. Recognising the media of each piece feels like the artist provoking a discussion into materiality in contemporary art, by which we observe both an end product and the material which has been put through a manual process. There is a certain sense of the corporeal, and human impact, in McMillan's show, in that there is a constant dichotomy between the natural and the synthetic, challenging the viewer to question both and wonder how we generate this binary. 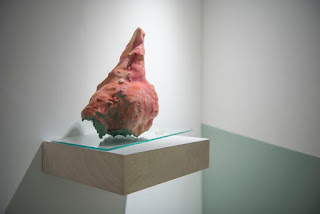 'Untitled', pictured above, does this by evoking the shape of a human organ. It is not identified, and is clearly not a realistic mimicry of the form of a real organ, however we are forced to use memory and association in order to place it in the framework of our own lives, and that of familiar imagery. This is where the lack of description becomes highly useful and intelligible; the artist calls her oeuvre something of a "visual poem" to how mankind process the vast level of images that they do, storing them functionally in order to gain greater understanding of the world from different perspectives.

The piece stands on a glass surface, under which is the first 'stone' featured in the exhibition. This is named in the works list as bronze, and in knowing this information the viewer is perplexed as to the way that this metal alloy is being valued. As a distinctly non-human material, being placed below the primary sculptural piece, as it is throughout the exhibition, we see the stone being almost crushed under the weight of human activity. 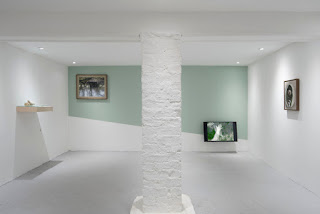 In the right hand corner of the gallery lies the titular film, intriguingly positioned much lower than the eye level of the viewer, therefore insisting that it is watched from a distance. In doing so, the viewer is forcibly engaging with the space by being situated between each work simultaneously. Instantly the film focuses in on the aesthetic, and sound, of water. An inconspicuous element, but as we are aware, water is an incredibly significant feature of human and non-human life, yet is also something which folds into the background of (especially urban) daily routine. Water remains as a backdrop in the visuals of the film, while again vital organ imagery is presented alongside fish and small shots of the process of forming the plaster models found across the gallery. While the film is by no means a linear documentation, there is a constant feeling of universality and acceptance, as the natural and the synthetic are depicted together to mean something new to the viewer.

McMillan states that the stones featured in her work represent 'internal and external landscapes', and while this might be a complex idea to comprehend, being present among the sculptural works allows the viewer to understand what this might signify. Psychological aspect of memories play, too, a significant role, and using film is a highly effective way of bridging an aesthetic idea and a profound, deeper narrative, where the schism between natural and synthetic becomes troublesome and, ultimately, we find ourselves questioning, and wanting to investigate, human impact in the world. At a time of significant interest in climate change and human intervention, this brings another layer of poignancy to the often abstract work of the artist.