For this provocatively titled exhibition at Stuart Shave/Modern Art, EC1V, a gallery which won last year's Stand Prize at Frieze, presents work with both collaboration and interdisciplinarity at its very core. Its premise is the showcase of new pieces inspired by ancient Greek 'herms', sculptural works "publicly sited, with a head and sometimes a torso atop a plain pillar with genitals", according to the press release. Upon entering the gallery space there is a distinct feeling of mixed environments; while the white cube of Stuart Shave/Modern Art is clear and unavoidable, the ambiance and awe which the sculptures command is more like that of a more traditional exhibition setup, such as the British Museum. This is not solely due to the references to Ancient Greece necessarily, as this is a mere source of inspiration; 'PUBIC SPACE' is not artwork with the intention of replicating herms. It is the way in which each work basks in its own individual space and is celebrated with the grandeur of its verticality which makes this so, bearing somewhat of a resemblance to Jake and Dinos Chapman's 2013 temporary space in Tate Britain's 'BP Walk Through British Art' exhibit.(1)

While one half of the collaboration involved in 'PUBIC SPACE' can be identified as established sculptor Oscar Tuazon, the other is the poet Ariana Reines, whose work is physically affixed onto the sculptures, and is listed in the media description of the artworks as appropriate. Each entity, bridging sculpture and poetry, has minute differences to its neighbours, thus ensuring the merit of thorough contemplation by the viewer. 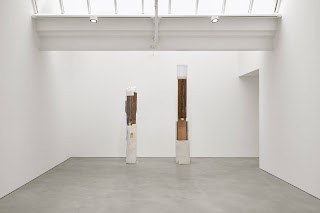 The addition of Reines' poetry at times seems rather novel, as the viewer can find that its presence is often not sufficient to have the desired performative effect. Fig.1, above, shows the first space of the exhibition (works are split between two), where the sheer blankness of the white walls come together with the burning candles on the first piece, 'MA', building an allure similar to the reverence of a sacred space. With great inspiration being drawn from Ancient Greece, this asserts the viewer in a strange ambiguous, theatrical space between the contemporary and a vague past (or historical) experience, as aforementioned, which cannot be instantly defined. This is again reinforced with the definition of a 'herm', a public statue often with a torso adorned with genitals; sexual inferences are made by the viewer throughout the exhibition, allowing us to create our own narratives, although there are no explicit elements to the work.

That being said, the poem accompanying the press release, 'Crystal Geyser', evokes violent sexual imagery with harsh words juxtaposed with softer verbs and nouns. While this particular poem does not necessarily aid comprehension of 'PUBIC SPACE' as a whole, lines such as "lingering over the regrets in my instrument" again create a 'present' moment by stirring historical and a highly 'cyber' ideal of what lust and sexuality might mean to a contemporary audience. The ambiguity and euphemistic tone is rather aptly transhistorical.

A candle burns on two of the seven sculptures in the exhibition, 'MA' and 'The House Husband'; the second space, where 'PUBIC SPACE' climaxes, presents sexuality and surrounding themes in a more straightforward manner. Intrusive phallic symbolism as part of 'Old Spice' makes an entertaining point of gendering inanimate objects; the hard materials of concrete and wood accentuate this point and bring a light edge to the work. One element of the exhibition which appears to signify the current era is the inundation of Reines' poems. Stuffed between wooden parts like the contents of an office binder, covered in wax remnants and burn marks from the active candles, the majority of the poet's work is not able to be read nor be understood outside the context of its objectivity. While I appreciate the collaboration of forms of sculpture and poetry, the substance of the exhibition lies in Tuazon's work; a performance of Reines' poems would be far more powerful than their partial presence in the space.