Within the frame of Alison Jacques Gallery, W1, the first moment of contact with Ryan Mosley's distinctly vibrant and imposing paintings sets the tone for the entire exhibition: confusion, excitement and intrigue at the meanings of each piece. However it is upon further reflection of this body of work as a whole which leads the viewer to abandon traditional ideas about observation and analysis. 'Anatomy and the Wall', the artist's fourth exhibition with the gallery, commands authority with Mosley's use of colour and line work, and certainly evokes a time of old while using a bold style which is more prevalent in contemporary art.

'Anatomy and the Wall' has been curated in a wholly logical format, as the main gallery space displays Mosley's large-scale scenes, while the second smaller space shows a series of alternative style portraits. The former is sure to entice the viewer into the chaotic style of the exhibition. Particularly in the context of the paintings being shown in Alison Jacques' white-cube style space, the viewer cannot help but be utterly drawn in by what they see, and beyond into what they don't. Mosley's lack of sharp focus in the works ensures that each piece is considered individually and intricately, and none more so than the first, 'Expedition to the Interior' (fig.1), which automatically conjures up ideas of hallucinogenic drug use, and this is mirrored in its content. 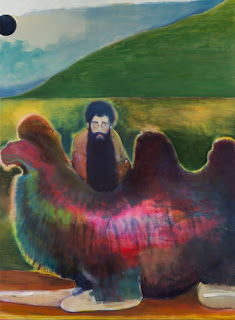 
The focal point of the image is both the face of the human figure and the middle, internal section of the camel-like animal. Deep, intense melancholy on the face of the man and the bright, nonsensical palette of the animal's fur depict an image of an erratic world, hence connections with the hallucinogenics. The viewers' reaction to a neon camel again sets up the expectation which Mosley has set for the rest of the exhibition, in that we begin to wonder about why our aesthetic expectations are so, and the mental result of these being ruptured. If there is one consistent motif in 'Anatomy and the Wall', it is chromatic fantasy coming to life, in largely banal scenarios.

As mentioned, the images comprising the first, main space stand between conveying recognisable symbols and the aesthetically or decoratively absurd. Colour choices antagonising the narratives are just one element of this, particularly in 'Bacchanal Poetics', a delightfully titled painting, which sees men each with a lovingly crafted different style, socialising after a night out, the title would suggest. As is fairly normal for a painting with such diverse colour, it is the off-white and the navy which produce a striking effect next to each other, drawing the viewer's gaze further into imagining what could be happening, rather than what is there on the canvas.

Throughout the show we are witness to various human forms, however the lack of sharp focus we find in 'Expedition to the Interior' is then followed to the faces of the people. Facial features often blend and merge, as the artist favours expressionistic tones in order to embrace his style as an artist. There is evident influence from the works of Marlene Dumas, as Mosley uses both techniques of blending and exaggerated features to convey personality and activity.

These faces are made the thematic focus of the second room of the exhibition, where it is mostly just portraiture, which is of course a form of art that would not necessarily be associated with contemporary art, especially outside of photography. So it is with this that the viewer observes the final eight works tentatively, unsure of how to fully comprehend contemporary art as portraiture and vice versa. One of my initial ideas about Mosley's intention with the portrait was that it could be a satire on the traditional means of representing the individual, as they were widely known to be a mediator from which to boast assets, wealth and/or looks in centuries gone by, in a similar way to how 'selfies' are used and abused in the twenty-first century.The way in which the figure in Mosley's painting 'Man of the Field' (fig.2) is wearing clothes which blend into the background of the board canvas is indicative of what the artist is hoping to express about the individual. Unlike traditional portraits, formalised names are not used in the second space of the gallery, or at all in this body of work; instead, our perceptions are shaped by pictorial details on what we can see and how we differentiate them from the figurative. 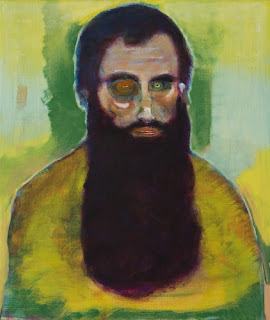