For this, New York-based artist Shadi Habib Allah's first exhibition at Rodeo, WC2H, the viewer is immediately informed that the body of work is on the subject of ownership, especially that which is spatially considered. Instantly we are aware that such a notion is difficult, especially at a time where spaces we inhabit have become more diverse than ever, such as international travel and cyber 'spaces' which we customise and make our own. Pleasingly, this particular body of work sees artist using a range of media, however the materiality of each piece is both challenging and challenged. When viewed within the context of the exhibition, artworks merge into one narrative-forming entity.

'30KG Shine' is comprised of three elements which produce this strong, truly compelling narrative which demands the viewer's attention and arrests it. The feeling persists that it would be wrong and incoherent with the nature of the exhibition to avoid mentioning Habib Allah's video piece first; as the eponymous title would suggest, (the film piece holds the title '30KG Shine') the eight-minute piece has something of a sovereignty over the gallery space. Given the deep evocations of the intensely dark room, the shuffles and slight, familiar sounds coming from the video ensure that it is contemplated prior to the artist's other works. In fact, the film's haunting ambiguity and literal darkness sets the foundations for Habib Allah's narrative throughout his work. 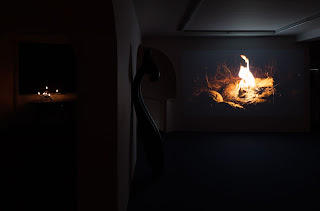 While the sensory comfort of viewing and hearing familiar things such as concrete steps and human whispers allows initial understanding of the piece, it is the troubling lack of linearity and consistency which ensures the viewer's concentration. A living organism, with hues of greys and purples, slides down a large set of exterior stairs slowly and begins to traverse across the city. Its ambiguous form is less disconcerting as one may imagine; instead, as it appears to live and breathe similarly to us, we are captivated by how the creature will move and what its instinctive actions may be. As with much video art, the narrative remains implicit and it becomes an intense viewing experience in order to fully expose the artist's ideas. Within the gallery space, curation has been executed in such a way that it translates as a manipulation of space by the artist. By this I largely refer to the large wooden sculptures, both 'Untitled', resting against the erected wall division; alongside '30KG Shine' they evoke a haunting ambience. Its totality of a complex narrative allows the viewer to be immersed fully within the sphere of Habib Allah.

Despite the grandiose nature of the video, the other sculptural works do not find themselves dimmed (if you will pardon the pun). Excitingly, the entire gallery space has been transformed with such mysticism that it begins to resemble a film or theatrical set. 'Untitled', an aforementioned wooden and metal sculpture leaning down the wall division, bears likeness to a grandfather clock. It is the semi-familiarity found within the context of both the film and sculptures which enhances the viewer's ability to simultaneously enjoy the realism and ambiguous uncertainty. Such an equidistant point between the real and the fantastical is appreciated in the way in which the artist discussed the constant, strong relationship humans have with objects, in that they are "strong, surviving generations of souls", as stated in Rodeo's press release. Where the artist impressively allows the viewer to contemplate the themes in '30KG Shine', while undoubtedly dominating and steering the space, it is certain that the exhibition forms a "strong, surviving" impact on the viewer beyond their mere physicality as artworks. 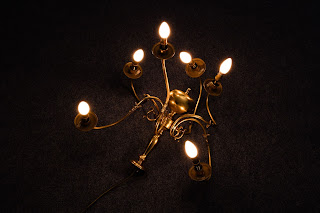