For its inaugural exhibition, PHOS Art + Design, W1K, presents a majestic collection of work by designer and artist, Dominic Harris. Directed and curated by Sarah Myerscough, of neighbouring Sarah Myerscough Gallery, this new space promises the creative development of challenging dialogues and practices within the realms of contemporary craft and design. Intriguingly, the word 'craft' generally does not harbour ideas surrounding new heights in technology, however from the moment you enter PHOS Art + Design for 'Moments of Reflection', there is nothing more evident than the use of technology that serves both a pedagogical and an aesthetic purpose.

The gallery uses the word 'participant' in its detailed explanations of the concepts within the exhibition, and this choice is certainly a significant one, as interaction with the works is paramount to understanding them. Facing the gallery entrance is 'Ice Angel', which was exhibited at the Victoria & Albert Museum during the London Design Festival 2012. A dominating, awe-inspiring presence, such as that found throughout 'Moments of Reflection', the gleaming purity of the white screen makes the viewer-enhanced movement even more striking. A recurring motif in Harris' work is the drive to bridge the daunting gap between humanity and technology, as it often seems that the latter is evolving so rapidly that mankind cannot possibly keep up, nor comprehend its scale.

'Ice Angel' is a large white screen which, although just above human standing height, seems to symbolically guard over the gallery space and the rest of the artworks. This is not the only way in which the installation is poignant, as it also boasts a 'memory', where actions by each participant are archived and repeated, thus creating this personal sensation between the intricate technology and the person standing, and moving, before it. Similar technology is also used in the mesmerising 'Conductor' installation, where the participant's hand movements and gestures, however slight, are utilised by the sensor in order to create a dramatic, dynamic sonic sample. The simultaneous imagery of an unknown galaxy truly isolates the viewer and transports our thoughts beyond our current space and incites ideas of infinite possibility. 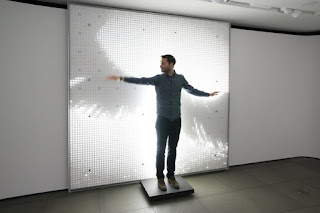 Moving through the gallery, there is a real sensation that you are collaborating with Harris on each idea; excitingly this takes the viewer outside his or her own physicality and into a realm which cannot be fully understood, yet which at times displays great, almost hypnotic simplicity. 'Four States', a triptych based on the three states of water, shows how three tranquil, if not stagnant, forms of water come to life with the movement of the viewer. We are also reminded of our fragile materiality. In depicting the three states, (vapour, liquid and frozen) the human presence is used to make sense of not only the installations, as they move with us, but in that we are the missing 'state' of water. The exhibition's title here becomes not only relevant, but poignant, as we begin to process the various levels of reflection required while viewing the works. 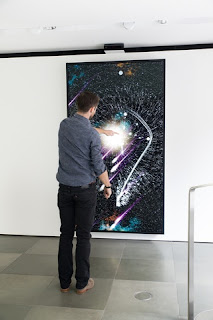 Whereas in 'Conductor' we are shown that we can be the creator of our own universe, 'Four States' reinforces the fragility and equality of our existence; regardless of any human difference, everyone can enjoy and embrace the pieces, and vice versa. Using technology, in impressive forms at that, to highlight human issues and existence, is one that must be appreciated as such. Given that Harris is both an artist and designer, we enjoy an insight into the futures of both disciplines, and the potential of finding something of an affinity between the personal and the technological realities in which we find ourselves.