At a time where we are acutely aware of mankind's impact on the planet, artists are using challenging and stimulating ways of incorporating their work into the discourse of the Anthropocene. For this exhibition exploring the different techniques in both practice and research, Hales Gallery, E1, have chosen three wonderful artists, Rachael Champion, Agnes Denes and Rachel Pimm, to highlight the ways in which our industry and technology-obsessed Western world is becoming further and further alienated from the natural environment.

Agnes Denes has been a practicing artist since the 1960s, and the photographic series on show 'Wheatfield - A Confrontation: Battery Park Landfill, Downtown Manhattan', which documents the artist's site installation in 1982, is well known in the analysis of understanding alternative ecological stances within a progressive urban realm. In the fast pace of the city, it is easy to overlook the devastating volume of detritus we create, especially as it is vacated from the public eye almost as soon as it is produced. 'Wheatfield - A Conrontation...' shows us the steps Denes took in transforming a Manhattan landfill into a wheat farm. Though it is not merely the idea which is immediately striking to the viewer, but the way in which the photographs convey the dramatic contrast between rural and urban land, with one showing a contemporary office complex in the background, blurred by transferring focus to the growing wheat in the foreground. Viewing both spheres in the single photograph allows the viewer to consider the ways in which the urban inhabitant can reconnect with nature in order to prevent further damage to it. Denes' message is in support of collective action, and it is certainly agreeable that this is the only way for true progress.

Interestingly the gallery has decided to show Denes' work from 1982 alongside two works from 2015. Experiencing all three concurrently, Denes' photography of her active project, Rachael Champion's installation and Rachel Pimm's video, they complement each other effectively, and form an interesting conversation about how the public can gain a greater understanding of environmental degradation. 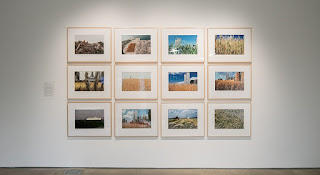 A recurring motif throughout the exhibition is that of the uncomfortable relationship between man and machine at a time of the Anthropocene. Rachel Pimm's video piece, 'India Rubber' is a documentary-style work about the process of making rubber, from the extraction of latex from the tree bark to its manufacture. The collaboration between the human worker and the heavy duty machinery is initially a bizarre sight, as the movement of technology has given a Western audience an idea of manual labour by a human and that of a machine as mutually exclusive. 'India Rubber' sees man working alongside various technologies to supply the global demand for rubber. It is, however, the soundtrack which is perhaps the most compelling element, as Pimm creates a repetitive rhythm using sounds from the making process. At this stage we become aware of the presence of the artist and the capacity for the footage to be edited and manipulated to convey a certain message. This disconcerting sensation as a result of human intervention is very much coherent with the themes and ideas of the exhibition, therefore it is important to notice it. 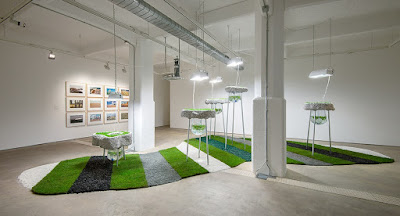 The visual spectacle of this group exhibition is notably Rachael Champion's installation, 'Raze Bloom', which draws inspiration from and wishes to highlight contemporary architectural and spatial issues within the Anthropocene. 'Raze Bloom' has several features which attract and challenge the viewer instantly, the first of which being the strong artificial lighting above each strand of the piece. Interestingly these have not been included in the list of materials used, but their glaring power reinforces the overarching theme that mankind has sought to control and dominate nature. This is again evident in the way that the piece has been formed; turf, gravel and rubber mulch have been consecutively used to create a pattern on the ground of the installation, expressing how closely we view authentic nature and man's manipulation of it. A vital element in 'Raze Bloom' is its analysis of contemporary construction sites, where both social and environmental needs are being demoted beneath the profit margins and rapid developments. Given the location of Hales Gallery, in the fast-paced area of Shoreditch, this will certainly be relevant to many visitors.

Hales Gallery's latest exhibition allows a thorough investigation into different ideas in the late twentieth to early twenty-first centuries surrounding our attitudes to the natural environment. Each of the three artists on display pitch the possibility that we are now so blasé about ecology and the like that we can no longer identify its needs and defining features. Champion, Denes and Pimm provide new depths to unilateral discourses about how collective action is required to make real change. It is a positive force to see gallery spaces adopt these ideals and give viewers more to consider when it comes to addressing climate change.