Given that London-born Ethiopian artist Theo Eshetu is highly regarded as a pioneering force in both the art and film spheres, with work spanning film, television and video, it seems correct, if not overdue, that Tiwani Contemporary, W1W, is presenting 'Constellations', his first solo exhibition in the UK. Showing various works from 2006 to 2015, the curatorial decisions made for the exhibition mean that there is an instantaneous level of awe devoted to Eshetu's pieces. For instance, the piece gaining the most media attention, video installation 'Anima Mundi', is a moving image within a static one; the twenty-four minute video plays within a mirrored space, with the viewer being able to see their own reflection in addition to the content of the video piece. Alas, I will address this later.

Large-scale C-print images comprise the 'The Mirror Ball Constellation' photographic series, formed over two years from 2013. Using an intense black to contrast against the central subject of each image, Eshetu has employed rich, vibrant palettes to these subjects, which include a globe and, in 'The Mirror Ball Constellation No.1', pictured below, what appears to be an Ethiopian mask as part of an anthropological museum collection. Its anonymity, in that we are not explicitly informed what the object is, is very telling of the artist's motif in the work displayed, as the viewer must use their own knowledge, or clichés and expectations of foreign cultures, to assess the work. 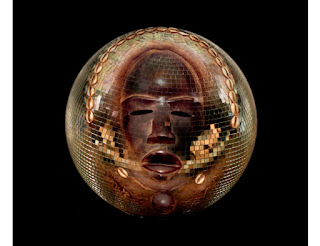 With such a startling grandeur aesthetic in his work, the viewer is drawn to contrast this use of golds and silvers with the anthropological symbolism which is recurrent in the majority of work as part of 'Constellations'. As a contemporary artist, we are again reminded that use of such imagery reinforces the injustices and archaic views of nations such as Ethiopia.

Providing a moving image piece which addresses life in Ethiopia in a context outside the museum environment, while showcasing the artist's expertise in both film and video art, is something which should be treasured as it is at Tiwani Contemporary. The five-channel video, 'Meditation Light', which inhabits a significant amount of space in the gallery, gives a filmic overview of life in Ethiopia, through audio and visual impact. Once again, Eshetu uses stark chromatic contrasts, such as total darkness transcending into small sparks of fire, then picturesque sunsets. Repeatedly employing imagery of natural resources, such as fire and water, reinforces old ideas and associated aesthetics of Ethiopia and other 'Less Economically Developed Countries'. We see workers performing manual labour, largely faceless, voiceless and without identities beyond their work, which is certainly troubling to the viewer.

Towards the end of 'Meditation Light', the use of museology and anthropological imagery, such as masks and cultural artefacts, which have been used in Eshetu's other work, flash rhythmically yet constantly, like results from an internet search, all without titles, without names. During this segment of the video, the artist chooses to use a controlled piano audio, as opposed to the drumming and sporadic vocals of the prior ten minutes. Interestingly, the latter is the more comforting, as it feels genuine and wholly un-contrived. It is clear that the artist is tantalising his viewers with what we are anticipating with his own experiences of Ethiopia.

As aforementioned, the piece with the most intrigue surrounding it is potential the novel yet potent video installation, 'Anima Mundi', the title referring to the belief that all living things are inherently connected. The piece uses similar moving images to the earlier work, 'Meditation Light', thus presenting a coherent exploration into the ways in which the Western viewer observes a foreign culture. The duplicated visuals, through the installation's mirrored feature, portray the way in which we are now inundated with images, via the internet and other media, that we do not spend any time thoroughly comprehending what it is we are seeing. In the wider sense, this includes disconcerting and uncomfortable images, not specifically addressed in 'Anima Mundi', of war-torn nations and cultures, which we are now, in a highly sinister way, accustomed to viewing. Despite the fact that 'Meditation Light' and 'Anima Mundi' were created eight years apart, there is a strong resemblance and we can witness a growth in Eshetu's work as he strives to use new techniques in enticing the viewer. As the viewer sees his/herself in the mirror, we truly feel part of this world that the artist presents to us, erasing personal or cultural differences and emphasising our humanity. From this, the varied images are not only bright and vibrant, but we are compelled to watch the entire piece, as we view works which are familiar and unfamiliar to us in equal measure. 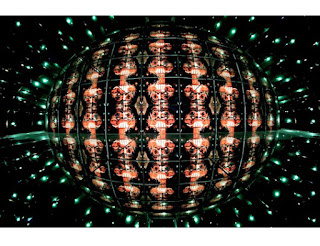 Such a balance of the familiar and unfamiliar supports a statement featured on the exhibition press release, stating that Eshetu seeks to question the notion of 'culture' in itself. In a world of globalisation and mass migration, the idea of a fixed culture is gradually becoming obsolete, especially in times of blurred public and private lives thanks to technology and, to an extent, social media. 'Constellations' showcases the artist's interest and ongoing experiences with cultural hybridity, which is almost overthrowing fixed cultural traditions. By displaying his work in new spaces and geographical locations, there is great potential for a wider conversation to develop surrounding these current and salient ideas.