At a time where such drastic cuts are being made to the arts, the notion of a generalised 'public' (especially in the sense of providing an education to the public in art and design) can rightly be explored, if not challenged. The title alone of this exhibition at Campoli Presti, E2, Miller's third at the gallery, is indeed provocative, as we are already expected to provide some kind of analysis on what such a term might imply. The artist's use of humour and popular culture against meticulous, intricate acrylic drawings sets up a firm preliminary contrast with which to observe the work in 'Counterpublics', presenting digital, or digitised, works against realism.

Inhabiting space and ways in which this can be done is an ongoing theme in contemporary art, and one that is unlikely to conclude any time soon. According to the exhibition's press release, Miller is concerned with the "repressive aspects of Western ideology", and the overbearing weight of capitalism is certainly prevalent in 'Counterpublics', to the extent that it offers a sinister reading of the work. 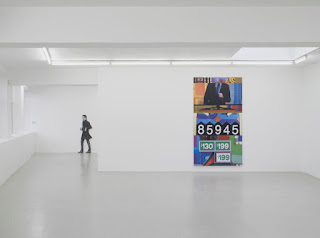 '1, 2, 3' is one of the first images on display. Interestingly, there is not a sequential narrative throughout the exhibition, in that each piece must be viewed in its respective place. Instead, the contrast of Miller's 'Game Show' series alongside the 'The Middle of the Day' drawing series provides sufficient evidence with which to understand the artist's thought process. '1, 2, 3' is the first of the former series, and, rather humorously, depicts something of a screenshot from the long-running television show, 'The Price is Right'. Given that the piece is 'dye sublimated print on polyester' further enhances the issue of capitalism, consumerism and loss of individual identity in the exhibition. Bright primary colours, which will be very familiar to viewers of light entertainment television, are employed alongside a distinct lack of human presence and personality. This uncomfortable environment conveys the artificiality of visual representations of a 'public'.

As with the title of this piece, it is numerical values that dominate the canvases featured in the 'Game Show' series. Considering 'The Price is Right' retroactively, it is not the names, faces or idiosyncrasies of the various contestants that viewers now remember, it is the garish colours, lights, novel games and cash prizes. Reflecting this back to our own society and culture, (I use the term 'culture' lightly, as contemporary consumerism transcends and eradicates histories and traditions ruthlessly in favour of profit) we see how possession and gain dominates our mindsets to the point of potentially deteriorating human relationships.

This solitude is also rather alarming in the second, concurrent segment of the exhibition, the various 'Untitled' acrylic drawings from Miller's observations of street life, between midday and 2pm. Candid shots are then developed into drawings, showing cut-out, life-size figures in between activity, ie travelling to work. Of the figures captured alone, there is the recurring symbol of the white headphones, automatically associated with Apple, and Starbucks cups. Again it is alarming that the eye is more inclined to acknowledge and recognise commercial logos and products than identify with the faces of the people who are a part of Miller's study. 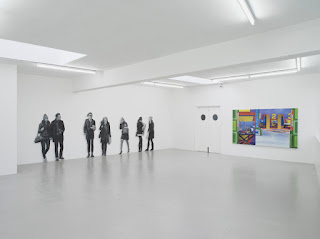 
In the almost blinding whiteness of the Campoli Presti gallery space, both the bright colours of the digital manipulations in '1,2,3' and 'Time is Money' and the intricate drawings of the 'The Middle of the Day' work well in complementing and accentuating the issues prevalent in each other. Using imagery from the everyday, along with popular culture, has been proven as a highly effective way to intertwine daily issues with more urgent matters on a larger scale, thus leaving a space for anticipating Miller's upcoming work.