As London's lovers of art and culture will be aware, American artist Doug Aitken is proving to be a significant feature in the city this summer. With his thirty-day event, 'Station to Station' having just taken off at the Barbican, and this untitled exhibition at Victoria Miro, W1S, to name but two, it is always interesting, if not somewhat unsettling, to see the same artist feature in multiple locations within a short space of time. However what it does mean is that their work is considered highly relevant and, in the case of his residency-like event at the Barbican, accessible and attractive to the general public.

One of the first points written about Aitken for the exhibition's press release is that, "defying definitions of genre, he explores every medium, from film and installations to architectural interventions". Due to the grandeur of the pieces on display in the gallery, there is a definite sense that the artist is staging something of an 'intervention', especially with the sonic sculpture 'Eyes Closed, Wide Awake (Sonic Fountain II)', as the piece has multiple paradoxes which assert its position as a strong feature amongst comparatively larger artworks. Its size is the first of these paradoxes; though it is tall, the focal point of the sculpture is a visually stunning chasm in the middle, where a pure, glowing white fills the small internal space and entices you towards it. The use of natural material in the form of water adds an intriguing new level to the piece, especially considering that Aitken's work is referred to as "post-pop" (despite his shunning of genre definition, as previously mentioned). I would be more tempted to deem work in this exhibition as "neo-pop" instead, upon observation of both the aesthetically comfortable and jarring. 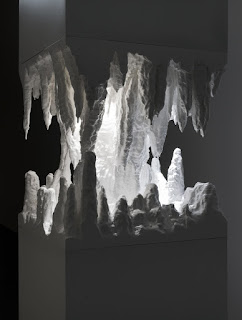 One example of pieces I would consider to be 'aesthetically jarring' would be the two pieces on display from the 'New Land (Blue Field / White Holes' series. The transcendental natural beauty of the blue, with obvious reference to ocean and sky, are interrupted violently by breaks and bursts in the canvas by holes of white foam. The artist's use of foam and acrylic for the piece is a striking method of conveying the progression from the familiar 'pop art', as our awareness is heightened to and directed towards the perils of environmental degradation during this time of the anthropocene. Destruction of the clear, untainted blue in addition to the material choice of acrylic and foam together as paradoxically natural and synthetic make 'New Land (Blue Field / White Holes II)' truly engaging and captivating.

While it is clear that Aitken enjoys, and thrives on, experimental, and ambiguous, use of artistic media, there is a definite sculptural weight to this presentation at Victoria Miro. The pristine, crystalline 'NOW (Blue Mirror)' from 2014 has been allocated its own enclosed display concave, allowing the viewer to bask in the sharp, shiny glory of the piece while eerily being able to see themselves reflected in the angled glass. Gathering around the piece and trying to look past the Martin Creed/Jeff Koons aesthetic, there is an overriding resemblance to worshippers around a shrine, further enhancing the premise of the ego-driven contemporary artist.  Attempting to overthrow preconceived ideas of pop art and its production is a meditation in itself, one which led to me realising how bold a word 'now' really is, to the extent that in 2015 it seems almost redundant. At a time where the British government is endeavouring to instill traditional values from the past, yet technology and new issues in a globalised world are screaming back that this is not appropriate, a 'present' moment arguably no longer exists. Furthermore, a long reflection (please excuse the pun) upon the piece shows the viewer that the 'now' has changed, even interrogating the social construction of time. 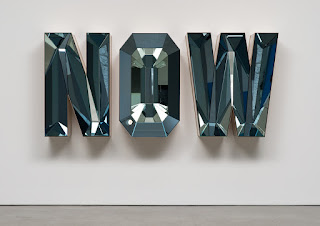 Ultimately, as Aitken's exhibition at Victoria Miro nears its closing week, it must be said that it is a small spectacle. That is not to say that anything about the work here is unassuming, timid or humble. It is the questions and ideas that are evoked by the artist's frantic assault on our minds which leave no room for humility or naivety. In locations such as Victoria Miro and the Barbican alike, Aitken's work has the rare ability to engage with and entice a vast range of people, which in the elitist world of contemporary art, is incredibly welcomed and, frankly, essential.