In the current world of contemporary art, it cannot be denied that there are many motifs and themes  constantly being circulated. However vague and open they may be, 'the body' and 'the comic' are certainly two which will not be a shock to many viewers. It is the ways in which artists choose to deviate from the clichés and present new, refreshing works that makes new interpretations interesting and engaging. This is exactly what my expectations were when approaching 'SUCKERZ' at L'Etrangère, EC2A.

My first encounter with the work of one of the exhibition's artists, Emma Hart, who is concurrently exhibiting at the Austrian Cultural Forum this summer, was her 'M20 Death Drives' installation in 2012 at the Art Exchange in Essex. I still have vivid memories of the piece, with its quick sonic effects and conveying a distinct feel of real peril. The essence of the real is always present in Hart's work, making her art initially accessible and visually appealing. Part of this appeal is that much of 'SUCKERZ' is enlarged body parts, something that has been a solid, politicised feature in contemporary art for some time. However the way in which this exhibition at L'Étrangère is presented is distinctly coherent, as the viewer is aware of flesh-like colours from the moment they step inside the gallery doors. With all the pinks, yellows and browns in the palette, everything seems almost edible, thus enticing the viewer further.

Features of the body and actual food items (potatoes, Ferrero Rocher...) become one, and having visited the exhibit on a sweltering, hot day, there were certainly attacks on more than one sense. There is an entirely bizarre sensation prevalent throughout, where it is uncertain as to whether pieces refer to cannibalism, fetishism or personification of some kind. Trying to assess these secondary ideas makes the experience of the exhibition more compelling on a profound level. Distinguishing between the real and the synthetic appears to be an ongoing discussion throughout 'SUCKERZ', especially viewing the banquet table which inhabits a large part of the front gallery space, as plates and cutlery resembling nipples, eyes and hair become static forms. 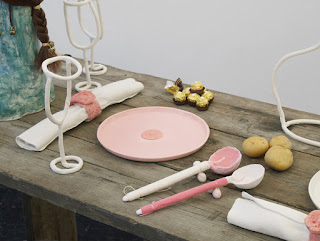 Naturally, this evokes a strange mix of discomfort and confusion, which contrasts with the initial comic element of the enlarged and appropriated body parts, leading to the viewer asking him/herself: Exactly what am I laughing at?

Hart's and Baldock's respective practices do bear similarities and exhibiting the two together is highly logical and aesthetically comprehensible in its mutual chaos and eccentric curation. Canvas, sculpture and installation comprise the exhibition but each piece far exceeds its medium. Baldock's oversized, inflated nipple sculpture placed under the banquet table is an exciting curatorial decision, defying traditional wall hanging, instead opting for what appears to be sporadic placement (but is undoubtedly intelligently intended this way). This way, the individual pieces are exposed and presented as entities; it is a true joy to embrace and be immersed within them in the gallery environment. 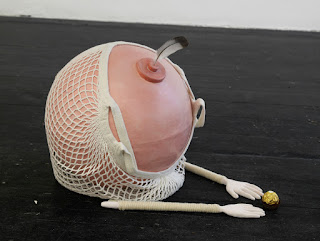