Update: Kashya Hildebrand Gallery is no longer functioning as a gallery space.

Representing the female body in contemporary art is beginning to feel as if it's been addressed many times, to little avail. While there is clearly progress to be made, both socially and within the art institution, there is a feeling that it is becoming a stagnant subject matter, mirroring the troubling time feminism is embroiled in at the moment. It is with this that we encounter Moroccan photographer Lalla Essaydi's latest body of work at Kashya Hildebrand Gallery, W1. It is usually a political yet frivolous move to acknowledge the artist's national identity in an analysis of their art, but there is a rich aesthetic in Essaydi's photography that can be viewed as "mocking the Orientalists' invented fantasy scenes, yet hers are based on historical, social and cultural facts", according to the gallery's press statement.

As Essaydi's second solo exhibition with the gallery, 'The Dangerous Frontier' presents this tightly coherent collection of work from the past two years. Each image bares a strong female presence, and the artist has used the same model for each photograph, which I believe to be effective in this clear depiction of the transhistorical state of being a woman, one that defies class and nationality. In a modern world almost defined by its globalised state, it seems ludicrous and frankly atavistic that the feminism largely subscribed to by an increasing number of Western citizens is so intensely focused on issues affecting Western women. Ultimately, 'feminism' is becoming such a loose term now that many groups within the large one of 'women' are being ignored,  not to mention those who ascribe to non-normative genders. Ultimately, women suffering from cultural as well as social injustices must be addressed, and in a society of privilege, this is difficult. Many of Essaydi's works allude to this, including 'Bullets #6', pictured below, which we can view as providing satire on Orientalism and its fantasies as addressed, especially as the image bares resemblance to both the Virgin Mary and non-Western traditional attire. 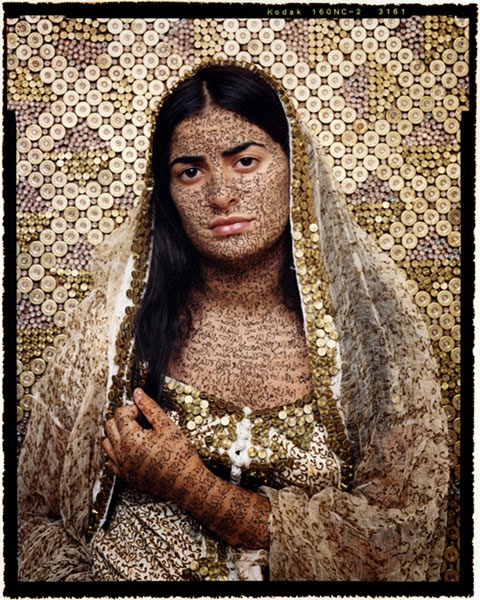 The artist's own words enhance the exhibition hugely, as it is clear that she has a vast amount that she feels inclined to contribute to discourse surrounding not only a more open, universal feminism, but postcolonial Orientalism. In a statement on her website, Essaydi says that:

"...my work reaches beyond Islamic culture to invoke the Western fascination, as expressed in painting, with the odalisque, the veil, and, of course, the harem. Here is another way in which my work cannot be read simply as a critique of Arab culture. Images of the harem and the odalisque still penetrate the present and I use the Arab female body to disrupt that tradition. I want the viewer to become aware of Orientalism as a projection of the sexual fantasies of Western male artists––in other words as a voyeuristic tradition." (1)

The bullets featured in the background of many of the works on display represent political realities, beyond the voyeurism and Orientalism that Essaydi is fervently trying to contest in her work. Using bullets of a similar tone and colour to the clothes and skin tone of the female model accentuates the way in which conflict in its various forms is becoming embedded in the lives and narratives of people living across the world. This is another reason that it is vital for the nationality and culture of the artist to be excluded from considerations of the work; global connections make these issues prevalent in the lives of us all, regardless as to whether or not we are physically immersed in them. 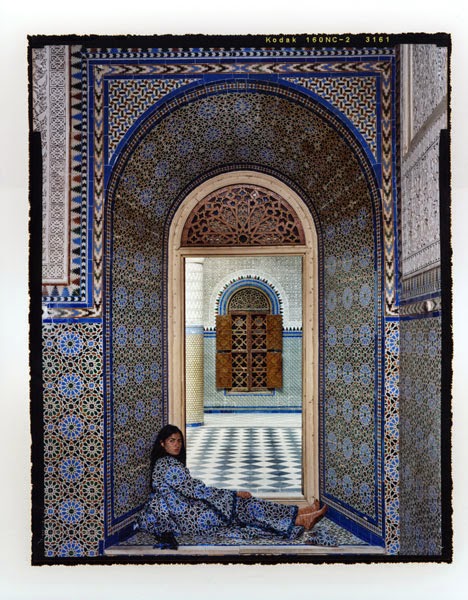 Within the realm of photography, it is always the subject matter which is scrutinised, in addition to methods and media choice. Essaydi has chosen to include the Kodak logo and printing detail in each finished piece, creating a certain accessible element to the photographic works and a great human presence. A visual presence of current technology further distances the work from the idealised, exotic traits of nations such as Morocco.  As is the case with the vast majority of the artist's recent work,  'Harem 14C' presents the protagonist not as a dominant force within the image,  merely as one segment of a decoratively complex composition. Architectural structures within 'Harem 14C' frame the female figure and shows her subordination due to her physically low stance.

Depicting dwelling spaces which in turn highlight social struggles in different guises serves to strengthen Essaydi's ideas. These aesthetic strategies enhance the artworks, providing them with added depth and authenticity in a contemporary art sphere where the fields surrounding feminism and Orientalism can be broad, albeit in their complexities. Kashya Hildebrand Gallery has the advantage of a basement floor for added works, and pieces such as 'Harem 14C' are well suited to the intimacy and perhaps secrecy of this underground level. The curatorial decision to place the majority of Essaydi's largest pieces at the beginning of the exhibition is an intriguing one, as excitingly there is no linearity from the way in which the pieces are displayed (we identify 'Bullets', 'Bullets Revisited' and 'Harem' as series in this collection of work, but they are displayed sporadically). In the search for a truly global, universal contemporary art, Essaydi, in her words and photographic pieces, comes close to bridging ideas and ideologies alike.