CGP Dilston Grove: Between Thought and Space (until 7th June 2015)

Small-scale exhibitions promising both diversity in artists and media are always exciting, but for my first visit to CGP London Dilston Grove, SE16, I encountered a wonderful space, in that the gallery is a disused church. Thus, the use of primarily sculptural pieces alongside architectural and sound elements made the entire experience truly engaging yet challenging. The premise of 'Between Thought and Space' revolves around different artists responding to the space, creating site-specific works. Intriguingly for my theory-based perspective, this exhibition is part of an ongoing research project, which will continue until December 2016. Observing the visual fruition of pioneering institutional research is hugely exciting, and as such I greatly anticipate the progress of the project.

Upon entering the space, each piece wrestles with the next for the viewer's attention, and fortunately due to the varying elements on display, we are able to assess and view each piece with due attention and care. One of the first to do so, perhaps selfishly based on my own research interests, was Foster Spragge's 'EAST WEST' sculpture installation, which consists of twelve immaculately shaped cubes of soil. Its perfect form was perhaps the first visual aspect which drew me to the piece. The concept is that, throughout the duration of the exhibition, the cubes will gradually re-align from the eastern side of the space to the west. In the artist's proposal for the work, he states that "churches and grave stones are traditionally built this way, the Altar in the East to receive the morning sun". Such a statement links closely to the physical form of the installation within the context of the exhibition, mirroring not only the architectural structure of CGP Dilston Grove, but also addressing the internal/external ideas of architecture, and human impact on these dwellings. With this, we can adopt an ecological stance, asking intense questions about both the anthropocene and capitalism, potentially opening a discussion on how financial and environmental issues and woes have transformed not only our landscapes but the way we view certain institutions and architectural structures. 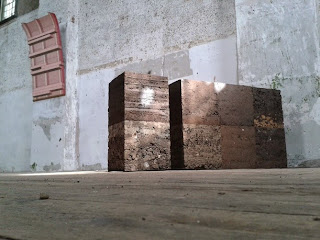 Another innovative piece located towards the front of the space is Pierre D'Avoine's resin sculptures 'Apparition - Holy Family'. The initial aesthetic impression the piece exudes is that of imminent terror, as the three sculptures are similar in form and appear to be resembling both spaceship rockets and bullets. After reading on its context, the artist confirms that they are based on the three "most frequently deployed of the thirty thousand bombs dropped by the Luftwaffe on London building sites". This instantly evokes the eerie sensation that is generally prevalent throughout the exhibition, linking both the past and present: 'thought' being the dream-like nostalgia of the past and 'space' representing the physical (and political) reality of today.

This eerie ambiance is secured in the constant of Isha Bohling's recorded sound piece, supported by the artist's collaborative sculpture work with Ian Munroe, the latter which is formed from an aluminium structure. Gallery visitors can then use a striking tool to gently interact with the piece in order to add to the recorded sound. Bohling's sound art is highly reminiscent of a traditional ecclesiastical score, but with a distinctly contemporary, revised twist. As a result, this non-physical presence amplifies the sacred ambiance. Physicality and the different versions of 'presence' are experimented with frequently in the exhibition, as demonstrated with the three pieces to which I have referred. The title alone, 'Between Thought and Space' conjures up discussion, discourse and aesthetic innovations surrounding the present and its linearity with the future, alongside an overarching concern about sustainability, both social and environmental. CGP Dilston Grove's current exhibition ultimately demands physical presence from its viewer, however, and I thoroughly recommend a visit to all those who are able. 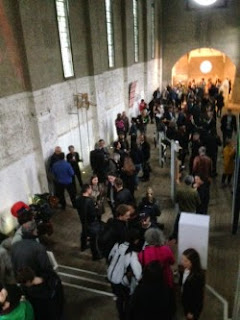 Photograph taken at the opening of 'Between Thought and Space',
CGP London Dilston Grove - 7th May 2015
Image courtesy of www.betweenthoughtandspace.com