Marlene Dumas has been a significant figure in contemporary art since her emergence in the eighties, but on a personal level I only began to consider her work in detail when I spotted her piece, 'Bonnard's Wife', at the Drawing Room's 'The Nakeds' exhibition, which I wrote about back in November here. From that moment, I was intrigued about her work and after some research was totally in awe of her unique, distinguishable style, which sets her apart from the clichéd assessment of classifications in which she fits, ie as a woman and South African artist. Despite this avoidance, her oeuvre acknowledges and certainly incites debate about many of the topics that concern her as a South African, but ultimately international, woman, and general citizen of the modern world. It was with this in mind that I was thrilled to hear that the Tate Modern, SE1, has put on a large show of the artist's work which, even more excitingly, should not be considered a retrospective and is not exhaustive.

Upon entering the first of several divided, vaguely thematic rooms, we encounter Dumas' written work, which throughout the exhibition enhances and opens her paintings far more than curator insight alone could have hoped to achieve. Early on it is stated that the artist never paints directly from life, however it could be argued that she uses sensations and experiences from life as close inspiration. It is clear that she only paints subjects which she feels she has some level of affinity with, or at least which represent issues that are important to her. The first exhibited piece, 'Rejects' which takes up the entirety of the wall on which it is mounted, sets an immediately unnerving tone for the rest of 'The Image as Burden'. For the viewer this is always exciting and enticing, much like a cinematic experience. It is with 'Rejects' that we are able to establish Dumas' own uncertainty and creative flexibility surrounding her own subject matter, which wonderfully does not affect her distinctive painting style. The mugshot setup of this first collection of paintings feels similar to the classification system employed to devastating effect in Nazism; however instead of mere physicality, the viewer cannot help but access a deeper level of psychological analysis, such as the intense facial expressions, enhanced by the seamless melancholia of Dumas' painting style.

There is a violence in many of the paintings displayed within the exhibition which exceeds a simplistic, one-dimensional view of depicting war and conflict. 'Black Drawings', which is again reminiscent of classification diagrams, yet also a complex motif of repetition that occurs in 'The Image as Burden'. Like 'Great Men', which appears later in the show, we are presented with a selection of case studies within the single title of the piece. Although the people represented in each painting remain nameless, we are informed that the artist selected models from postcards of Africa and later contemporary images from Afro-American magazines, thus highlighting the lack of historical representation of African people in 'world history' references. 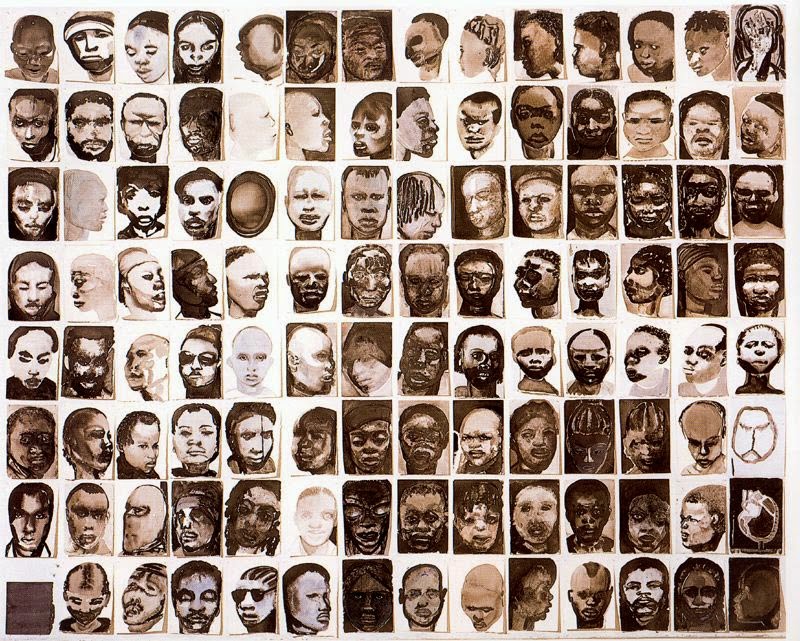 The fact that Marlene Dumas' practice is still ongoing certainly gives the exhibition a refreshing feel, especially considering that it is being shown at a great institution such as the Tate Modern. Perhaps it is her use of deep black pigments and often sinister gestures against the white walls of the gallery space, but there is a distinct, overarching sensation that Dumas' work is breaking out of the canvas and dominating its physical surroundings. The recurrence of sinister imagery, in its various degrees of intensity, provides a narrative beyond the realm of communication (through citations). For instance we have 'Phil Spector - Without Wig', pictured below, which depicts the mugshot of music producer, Phil Spector, after being arrested for the murder of actress Lana Clarkson in 2003. One distinctive feature of portraits featured in this exhibition is the eyes; Dumas possesses a gift of portraying a whole fabric of stories, feelings and histories all within her subject matters' eyes. Often they are so haunting that they produce entirely new levels of depths to the paintings. 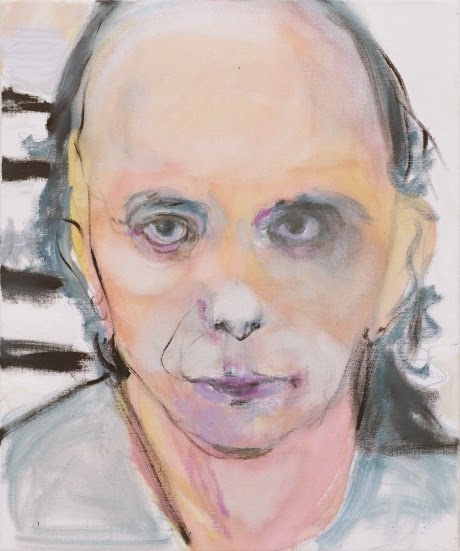 While 'The Image as Burden' will be of particular interest to followers of contemporary art and those with knowledge about Marlene Dumas, there is no doubt that the exhibition has much to offer all demographics. The repeated use of the artist's written work almost as lone-standing works, in line with the paintings, reinforces the exhibition's title, in that there is more to offer than the aesthetics of her work. As I have addressed, the political urgency of many examples of her work coincide with ongoing social issues surrounding conflict, feminism and racism; identifying where these and other themes coincide is one part of the excitement of participating in the exhibition. Phrases, somewhere between poetry and prose, such as "if painting is female and insanity is a female malady, then all women painters are mad and all male painters are women" expose more that Dumas provides to encounter, explore and, ultimately, question about the world in which we are living.