Update: Carroll/Fletcher is no longer functioning as a gallery space.

Given that my current field of research is gendered spaces and exploring the notion of feminist architectural structures, I was excited to hear of Helen Carmel Benigson's project at Carroll/Fletcher, W1, where features from popular culture and clearly anecdotal references have been employed to create something of a microcosm of the artist's sensations towards the treatment of women in today's technology-driven society. As the exhibition's press release states, Benigson has created a "psychadelic digital carnival", which is at once overwhelming, insightful and claustrophobic, despite there being ample physical space...

There are some readymade elements to the space, the exhibition being one of three current exhibitions at Carroll/Fletcher, including perhaps the most bewildering element of 'Anxious, Stressful, Insomnia, Fat', the sculptural 'Baby Bowl', a birthing pool which screens the video piece 'Nut Allergy'. While its presence in the room is not disruptive, (it has been positioned in a corner, allowing optimum viewer movement within the space) it is easy to feel that many aspects of the 'feminine' have been addressed by the artist in such a way. Unlike what the viewer might expect from a contemporary outlook on the reality of the female condition, the birthing pool itself is largely sterile and, of course, unused, which reinforces the idealisation of women, stemming from Ancient Greece and being reflected in how women are often still viewed as pure, delicate and, ultimately, subordinate. Accompanying 'Baby Bowl' is 'Health Log', a series of what is described as "the artist's collection of gynaecological equipment", an unnerving selection of tools which, bizarrely, do not seem entirely out of place in the chaos of Benigson's stream of consciousness. In addition to this, they, along with the birthing pool, are the only products of a tangible reality within the space. 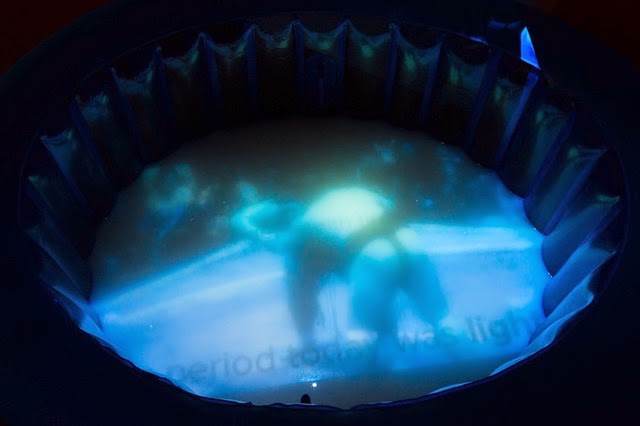 
The aforementioned claustrophobia derives largely from the artist's bold and unwavering use of sound. Initially I was uncertain as to the connection between the audio and the accompanying visuals, however reading the details surrounding the exhibition it emerged that the various video pieces are indeed linked with the sounds which dominate the room, despite the different tracks sounding similar and unwavering. Anyone visiting Carroll/Fletcher, whether or not to see Benigson's section of the gallery, will surely have the words "complaining"and "allergy" circulating in their minds for some time even after leaving the vicinity.

Benigson's alertness to the "dematerialisation of the body" is expressed through her work addressing the lifestyle "choices" of women, paying close attention to the vicious cycle of dieting in Western societies, most evidently targeted towards women. This pressure, primarily that of the female gaze towards other females, is then merged with the male gaze in one of the artist's video installations, in which Christian Mingle and JDate.com are displayed as a marriage (pun intended) between human and digital interactions emerges. It is at this point that we are made aware of the impact that technology is imposing on our lives, providing another platform from which our lifestyle choices can be challenged and scrutinised in both an active yet inhuman manner. The exhibition's title reinforces this; its four words are over-familiar to women in the twenty-first century, as outlined by Rosalind Coward's text on 'Female Desire', where she reiterates the multifarious "guilty pleasure" women experience with the enjoyment of food.

Visualising sumo wrestlers within the realm of Benigson's distinctly feminine space is an ultimate symbol of obesity and a baffling cultural exchange. This 'feminine space' certainly seems to hold a cliché or two at face value, however it is a purposefully evocative employment of colour (there is a bold pink flooring covering 'Anxious, Stressful, Insomnia, Fat') and soft shapes (circles are recurrent) that create this sphere for which the artist is providing a critique. The audio accompaniment to the various video installation pieces uses a computerised female voice, further enhancing the prevalent digital element of the exhibition. While there are no explicitly interactive elements per sé, the combination of popular culture, anecdotal narratives and digital input provide a suitably fragmented approach to conveying the contemporary female condition, concurrently highlighting the problematic aspects in the process. 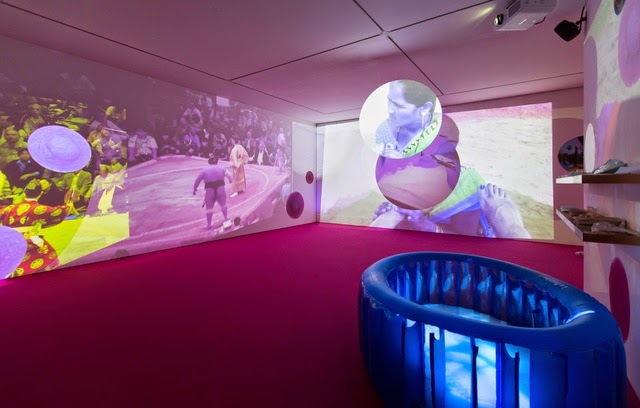