Disclaimer: This article contains images of a sexual nature.

The female nude in painting is a subject that has been discussed, debated and critiqued for many years, resulting in the distinction between the 'nude' and the 'naked' figure becoming now clear, with the latter implying some vulgarity. Naturally, with the naked body, vulgarity is usually expressed as a subjective opinion by the viewer. Challenging this, there are a wide range of works being displayed at Drawing Room, SE1, by some incredible artists, which highlight and throw into question the taboo of the naked form.*

A combination of the great expanse of exhibition space and the high calibre of artists makes 'The Nakeds' an unmissable exhibition for lovers of contemporary art and one of its most prevalent features. Upon arrival, I was informed by a gallery assistant that Egon Schiele and his prolific collection of nudes provide the basis and inspiration for the exhibition. Running concurrently to the Courtauld Institute's Schiele retrospective, several of the early twentieth century figurative paintings are displayed sporadically around the space, which allows a thorough investigation into the presentation of the nude and its place in art history.

At the beginning of the Drawing Room, it is outlined that the nude has been used "to represent love, shame, solitude and sexual yearning". These divisions ensure that the viewer can understand and observe each painting with a bizarre merging of free thought within the boundaries of the premeditated curator's intentions. However it must be said that the paintings have been displayed in an order which defies these classifications, ensuring that most artists with multiple works in 'The Nakeds' are displayed separately. The late Franz West is one artist whose pieces do not comply with this notion, as his two 'Untitled' gouache paintings are displayed consecutively; despite my praise of the curatorial decision to split artists' work, I do feel that placing West's pieces together is correct. 'Untitled' is strikingly different from every other figurative style here, and the combining of paint with collage is one that is entirely unique to West in the realm of the exhibition. While there are several depictions of genitalia and sexuality, the crudeness of 'Untitled' is one that deserves isolation. As something that emerges as a motif in the traditional depiction of the female nude, we notice that the two women are identified by their hyper-sexualised body parts, particularly emphasised by the shapeless form of the onlooking male figure. As a result of the disturbing voyeurism portrayed in the piece, there is certainly a hint that Jonathan Yeo has been inspired by such artworks for his new (or revised) portrait of Silvio Berlusconi, where the artist has used pornographic imagery to compose the sitter's features. 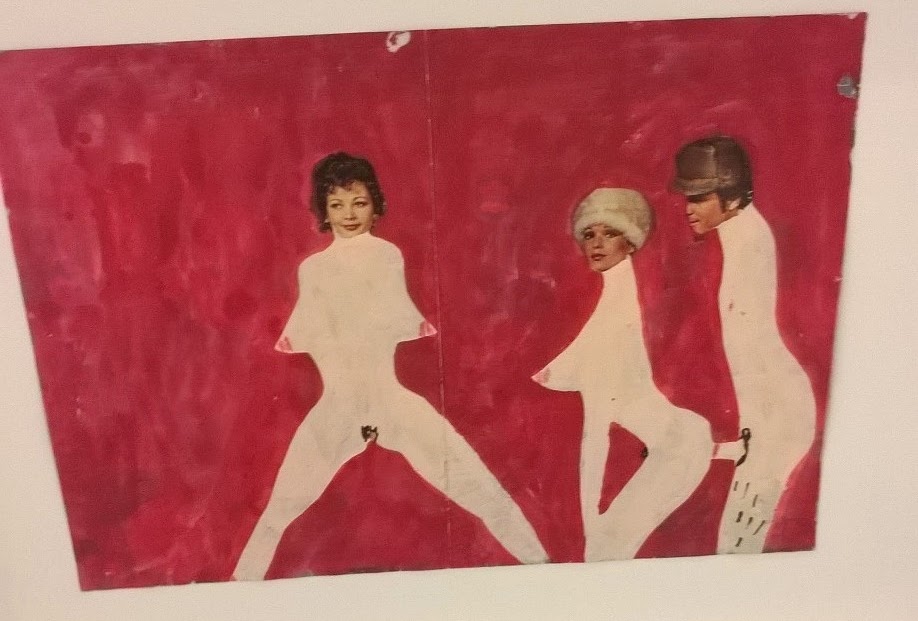 From beginning to end, it is wonderful to see such renowned artists' work in a smaller gallery as opposed to the great institutions. Louis Bourgeois, for instance, is regularly found in large exhibition spaces across the world, but 'Arch of Hysteria' among all the other thematic pieces allows the viewer to abandon the awe of the artist and their profiles in order to fully appreciate the content of the image and, in many cases, the raw human sexuality that it exudes. Through the feminist gaze, 'Arch of Hysteria' is a highly powerful piece, where the physical and emotional trauma of both being in a naked state and the sexual act is prevalent. Once again, it is the female body which is under the most scrutiny and speculation, as the female figure is presented in a wholly entirely, unnatural stance, conveying the myriad difficulties that women experience.

'Arch of Hysteria' by Louise Bourgeois
Image courtesy of www.drawingroom.org.uk

'The Nakeds' is a compelling collection of paintings and drawings depicting the body in recent years. Somehow, the exhibition is reminiscent of the recent exhibition at the Hayward Gallery, 'The Human Factor', (which I wrote about here) but from the different perspective of works on paper as opposed to the sculptural focus which the Hayward presented. Interestingly, curators at the Drawing Room have not comprised a narrative per sé, instead depending on the recognised talents of the artists and not only their fervent messages but the perceptions and receptions of the viewer.

*anyone interested in this as a theme should check out the ongoing Free the Nipple campaign. More details can be found at: www.freethenipple.com