With a career spanning almost half a century, I cannot deny that I was extremely excited to see Gilbert & George's latest body of work for the White Cube, SE1. Due to the vast expanse of the gallery space, works tend to dominate the viewer and demand attention; being one of the most prolific duos in contemporary art, this was never going to be a curatorial problem for Gilbert and George.

There are certainly recurring themes that have been present in the media which the artists wish to highlight; the exhibition's title hints at depicting the marginalised social groups taking the blame for society's issues, topically comparable with UKIP representative, David Silvester, unfathomably blaming poor British weather on the legalisation of gay marriage. Alas, happily, the first image on display, 'Welcome', has the style of a tourism advertising board, but instead replacing glossy photographs of the London Eye, Big Ben and Tower of London with Gilbert and George in the guise of hooded criminals. Notably the composition of the piece is fragmented, placing emphasis on the dichotomy of reality and commercial depiction and, subsequently, the rich and poor. 'Welcome' is certainly reminiscent of the riots which took place in 2011, which tarnished the global view of London for some time. I would love to know what tourists to the area think of the piece in relation to their own experiences.

Within the same gallery, (there are three currently dedicated to Gilbert and George) the large-scale 'City Lights' is placed on the central wall, but this is not the reason why it attracts such a great deal of attention. A wonderful mirror technique has been used on photographic images of suburban residential areas to create something of an optical illusion; from a distance, the houses appear like a nineteenth-century arcade architectural design. This level of awe is further confused when the viewer notices that the centre of the image is a photograph of a small supermarket. Gilbert and George often focus on urban living; their adopted motto, 'Art for All' shows how they look at the minutiae and overlooked, which is easily done in a city as dynamic and populated as London. 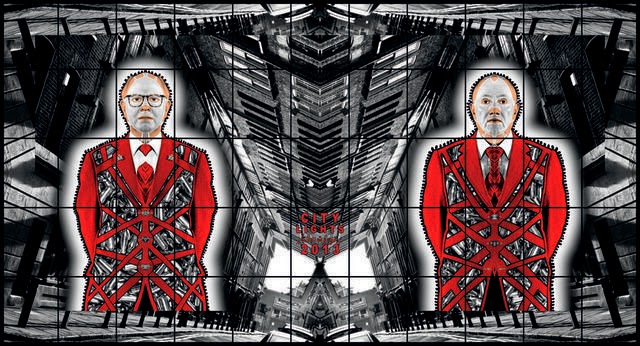 'City Lights' by Gilbert and George
Image courtesy of www.artsy.net

It is after 'City Lights' that the exhibition hones in on its key messages. The wonderful 'Ahem' uses the full body of a Muslim woman with another use of a reflective technique. Multiplying the image of the woman, this strikes me as ironic given the humility that this social group is supposed to possess. While the anonymity of the subject is still present, the striking presence of the two artists on the canvas hint at the objectification that remains for women, particularly Islamic, in both London and abroad. South Gallery 1, where all the prints I have mentioned thus far are displayed, presents a harsh, unadulterated introduction to the exhibition. As the viewer moves through each room, at no point do we become desensitised to he sheer scale of the pieces, which are usually 377 x 635 cm.

Gilbert and George have cleverly employed a visual representation of disparity in social figures. 'HM & HRH' shows a greyscale photograph of the Queen passing by in a car, accompanied by Prince Philip, however the latter figure is largely overshadowed by the viewer noticing how the Queen appears humble, lonely and lost. Again, the artists' use of bright red further accentuates the mood of the black and white. Assessing this piece holistically in relation to the exhibition, it is interesting to see how the figure of the Queen is depicted in opposition to the (anonymous) Muslim female, questioning how they are both treated in society and their importance within it. While it is a fairly common opinion that the monarchy is an atavistic institution, is the image of the Muslim woman by contrast a progressive one?

Moving on from the Islamic representation, which is recurring throughout the exhibition, active sexuality also plays a large part in proceedings. This will not be a surprise to anyone familiar with the duo's previous work, especially if you have seen their past exhibits at the White Cube, including 'New Horny Pictures' of 2001 and 'Sonofagod Pictures: Was Jesus Heterosexual?' five years later. Many East London references are made in Gilbert and George's work, but I was still somewhat perplexed by 'Kota Satay', which presents a man's naked torso with sexual symbolism on top of Gilbert and George's self-portraits. Frustratingly, after some further research I found nothing other than the title referring to an Indonesian restaurant in Spitalfields. It is at this point that I employ the artists' own motto, "Art for All"; the subjects of each image are kept as open and accessible as possible, allowing the audience to enhance the work with their own ideas. Finally, the eponymous piece towards the end of the exhibition, which has many viewers taking photographs of its parts like tourists, reinforces another of the artists' manifesto phrases: "We want our Art to bring out the Bigot from inside the Liberal and conversely to bring out the Liberal from inside the Bigot". 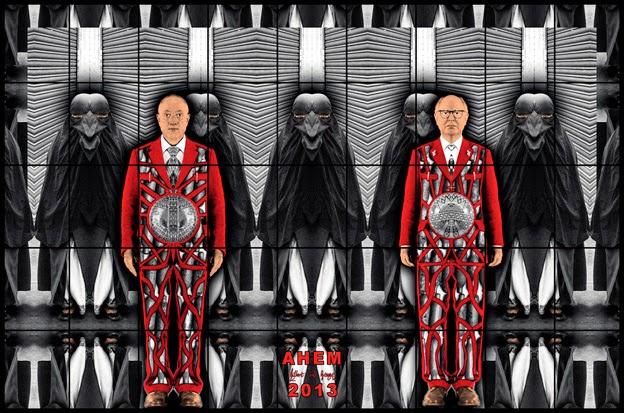 'Ahem' by Gilbert and George
Image courtesy of www.bbc.co.uk