The curation and conduct of a retrospective with a subject matter like architecture can be problematic. As will become clear, I believe that it is beneficial to put such an exhibition on at a museum as opposed to an art gallery. Although there are specialist galleries such as the wonderful Anise Gallery which have a high level of expertise, for the purpose of a large-scale exhibition to accommodate the general public, it is important that the exhibition is  informative and heavily cited.

So it was knowing relatively little about Louis Kahn's (1901-1974) work that I approached the Design Museum's, SE1, latest exhibition. As I have already mentioned, being a different environment to an art gallery allows the exhibition's curator to educate the curious in a thematic way. Exploring the power of Kahn's architectural legacy, we are treated to installations, models and video interviews of the architect's contemporaries. While there are certainly advantages and disadvantages to such an intense, condensed layout, the museum must be commended for its multiple dimensions focusing on the life and work of Louis Kahn. For anyone interested in architecture or becoming an architect, this is a must-see exhibition.

The introductory panel of 'The Power of Architecture' sets up a highly romanticised vision of architectural practice. Phrases such as "choreographic mastery of light", "universal symbolism" and "archaic beauty" inform the viewer that Kahn's work plays a pivotal role in architecture's contemporary state; his buildings, and visions, remain progressive and futuristic. Personally, I am still undecided as to whether I like the taxonomising that occurs within the space, especially as many can be seen to overlap, however it is certainly a sound idea to include 'Science' and 'Community', as not only does it allow the broadest understanding of Kahn's working ethos, but it encompasses museum visitors with a wide range of interests. 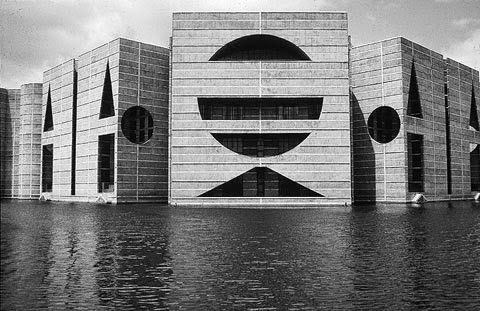 We are immediately introduced to Kahn's background and lifestyle, which is important in understanding the various ways in which he was inspired. A large emphasis is placed on the various cultures he had experienced, despite revealing that the majority of the architect's work was realised in his home town of Philadelphia, Pennsylvania. His 1951 sketch, 'Acropolis, Athens, Greece' focuses less on the minutiae that you would expect from an architect. Instead what the viewer notices is the vibrant use of colour, conveying life, movement and a narrative that expands beyond the physical inertia of the building.

With my own special interest in community arts, I found the digitisation of Kahn and Oskar Stonorov's 1944 'You and Your Neighbourhood' proposal to be exciting, on a level that is highly politically minded. The pair were passionate about post-war housing and outlined several 'neighbourhood needs', which certainly allows the viewer to reflect on what they would compile for a list of their own and how their own local community compares. Having been written on the brink of post-modernity, it is certainly enlightening to read "streets should serve homes primarily, not traffic". Bringing back a sense of intimacy and community just before the end of the Second World War was clearly a priority, with one of my favourite phrases from the proposal: "social growth and neighbourly cohesion", which makes it sound on the borderline of a Marxist manifesto. Although naturally it is a different situation for housing, it does alert us to how little we know about the politics of the contemporary architecture here in London; much of it is down to speculation.

So, walking through the exhibition we encounter the various categories that have been put into place by the curatorial team; fortunately, most of this is also chronological. Although it is easy to find the exhibition as a whole rather intense, (possibly not my first choice for visitors under fifteen years old) the warmth of the museum feel returns and we are informed and intrigued throughout. Many events and exhibitions are upcoming on the subject of architecture, and the Design Museum's contribution is one that certainly has me excited for what is yet to come.