As the first of its kind in the UK, the Black Cultural Archives, SW2, ultimately wishes to educate the masses about the struggle and celebrate the vast array of achievements of black people from different walks of life. Its inaugural exhibition is specifically concerned with the documentation and impact that black women have had, despite adversity. While this appears to be a very modern topic, I was delighted to spot a sixteenth-century drawing by German Master, Albrecht Dürer as I entered the exhibition space.

However, prior to this discovery there is the introductory panel to the exhibition, which really establishes the Black Cultural Archives as a location. Its recent £7million re-vamp into what is now the archives has ensured that visitors respect its status as a heritage site, despite only having opened in July this year. The struggle that the BCA have been through to put the project into fruition is referenced in this opening passage, as we are reminded that being educated about the endeavours of black people in Britain (women in particular, for the sake of this exhibition) requires "a committed general public",  furtively alluding to a small number who would still have an atavistic view of such a project. Alas, the institute has now come to fruition and visitor numbers were high during my visit, providing a glimpse into the pleasing truth that there is definite support for the archives and subsequent education on black history. 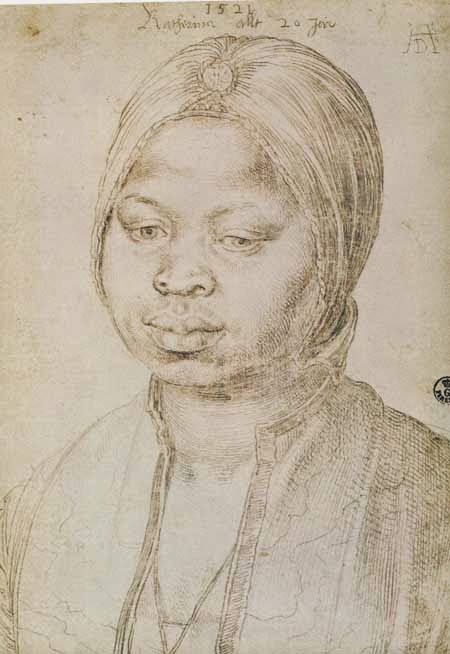 'Re-Imagine' is such a powerful exhibition due to the range of women presented. While it is no surprise to find a photograph of Doreen Lawrence OBE, whose unparalleled activism in both justice and education for young black people has made her a true role model to any race or gender. Interestingly, in regards to Durer's 'Katharina', visitors are informed that the domestic and political lives of black women are inherently inseparable, which reinforces the need for a 'black feminism'. As an ideology, this has been established in order to highlight issues such as virginity testing and domestic violence, which of course affect women of all races, but are prevalent in various developing countries.

As a mixed media body of work, including video footage from an early OWAAD (Organisation for Women of Asian and African Descent) conference, we are reminded that the work and historical presence of these women in the UK is highly relevant to the freedom to which we are now close. Another example of a groundbreaking young black woman is Olive Morris, who established the Brixton Black Women's Group and campaigned for various closely-linked causes, including policing (which of course has been pivotal in Baroness Lawrence's work) and housing. Her tragic death at a mere twenty-seven adds to her place in history; the exhibition is working hard to preserve her memory, as they repeat the sad truth that many stories of black women's lives are forgotten in the passing of time.

This is particularly true of the seventeenth-century 'Portrait of an African Woman' by Wenceslaus Hollar, which comes with a haunting citation that the subject matter along with her history, background and identity is now "lost in time". Personally it forced me to reflect on the legacy that we all will leave on the world: the constant inundation of instant photographs and storage of memories will soon be wholly redundant, as future generations search for the real impact the people of the early twenty-first century had on the world.

Finally, a piece which both opens and closes the exhibition for each visitor, as it is located by the mutual entrance and exit, is John Akomfrah's short film, 'Peripeteia', which looks at Durer's portraits, which are supposedly one of the "earliest Western representations of black people", according to the accompanying statement from gallery Carroll / Fletcher. The video is accessible online here; it certainly does wrap up the exhibition succinctly. Overall, 'Re-Imagine' leaves a particular matter open-ended: should social history be considered in terms of race? Meanwhile, it also highlights that overlooking this in favour of an 'equality' would dishonour the triumphs that many outstanding black women have achieved.