Disclaimer: This post contains material that some may find offensive.

With her work distinctive in its rawness and holding an unapologetic stance on gender inequality, Judith Bernstein has been a pioneering presence in radical contemporary art since 1960s, at which point she began making "erotic art". In its classical sense, one might think of this as something similar to Titian's 1538 painting, 'Venus of Urbino'. However, as she has been doing for the past fifty years, Bernstein shows south London her latest gruesome, evocative paintings at Studio Voltaire, SW4, this summer, including what the gallery boasts as being the artist's largest scale piece to date. From 'Rising', the viewer can see that Bernstein has something of a visual voice which will not be silenced any time soon.

It is certainly interesting that generally, when a radical female artist emerges, she is automatically placed in the 'feminist artist' category, but it is with no doubt that Bernstein has earned this status, as her work has included collaborations with Guerrilla Girls and the Fight Censorship Group. So while her peers, and the next generation of artists, are regularly praised for creating politically minded works through a kind of passive activism (apologies for the hideous paradox), Bernstein has and continues to show how a strong body of work by a passionate woman leads to a fiery drive for change in the contemporary art world. Alas, upon entering Studio Voltaire, the viewer notices that the gallery is divided between two exhibition spaces. Due to the size of the work on display, this separation is necessary and subsequently produces an effective viewing experience.

The room to the right of the entrance is the more vast space, housing the five 'Screw' drawings and 'Golden Birth of the Universe', pictured below. While Bernstein's work definitively speaks for itself, the linear placement of the several 'Screw' pieces leading up to the 'Golden Birth of the Universe' really adds a climactic impact to our experience of the latter. Each 'Screw' charcoal piece, which are all products of work done this year by Bernstein, overwhelms the viewer with their monotony and repetition within the gallery space and certainly exudes a feeling of entrapment. In the case of these drawings, the curator has used Bernstein's ideas of female empowerment and sexual liberation in the placement of 'Screw' (1-5), as the tall canvases convey a strong sensation of male domination and a form of natural violence that is thrust upon those who find themselves an 'Other' to the male power structure. 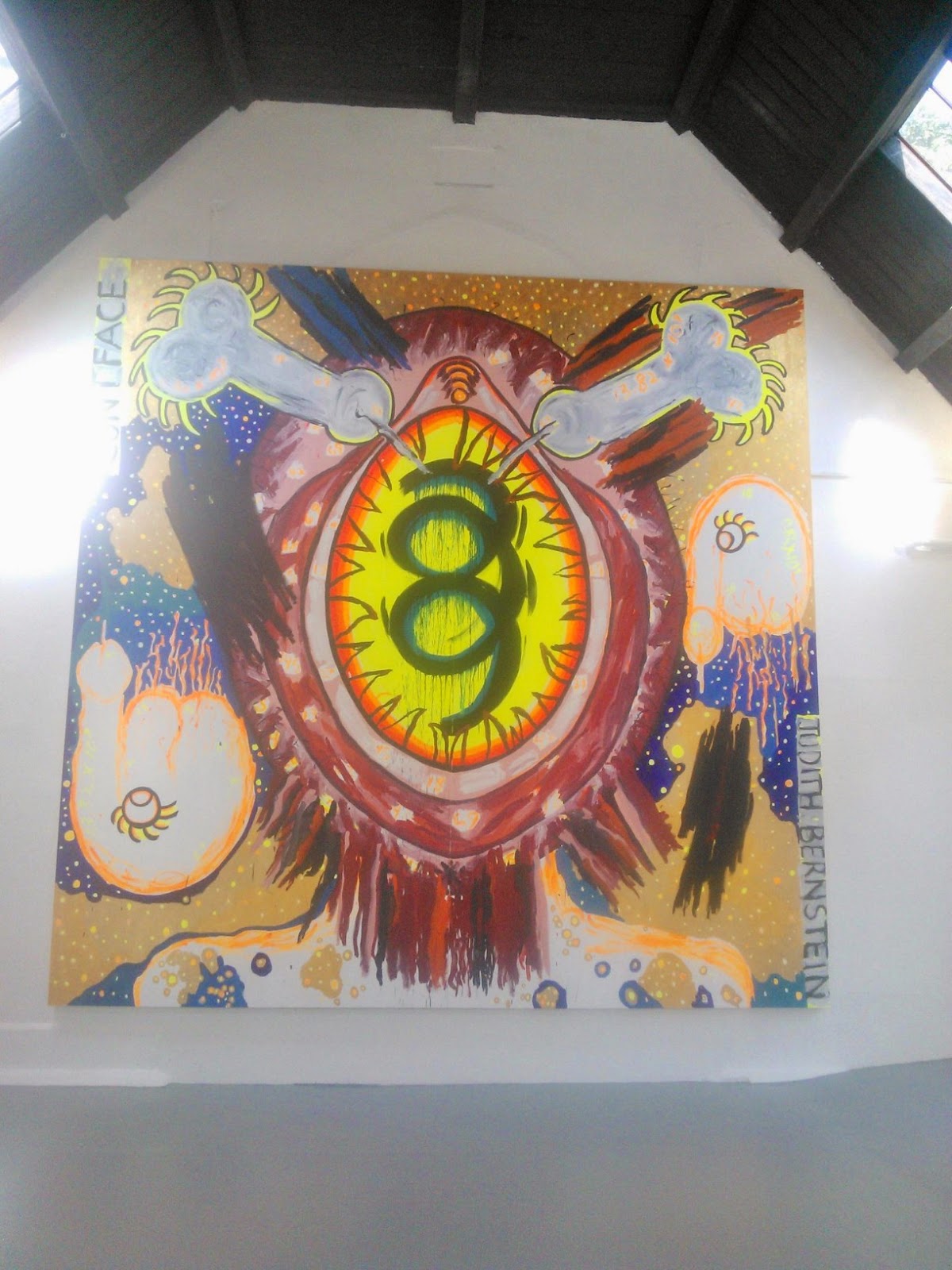 So onto the main feature of the room, 'Golden Birth of the Universe'; in addition to the obvious, hyper-sexualised use of imagery in play on the huge canvas, it is the various colours employed which also stage a presence. Firstly, it is the golden backdrop of the painting which helps alleviate and highlight the image in its entirety, but it is interesting to note that the two phallic figures at the top of the piece are presented in silver, hinting at the secondary nature to their female counterparts. Animating both male and female genitalia makes Bernstein's work both comical and biological. Referring again to the artist's colour palette, the size of the central 'Cuntface' (the artist's phrasing, not my own) uses tones we can relate to as being corporeal and raw; the rich reds, browns and pinks used towards the centre of the canvas ensure that the viewer can relate to Bernstein's expression. The vivid aggression of the colours, along with the tearing notion of the painting's face, creates a violence that suggests the vagina is an organ to be feared.

It is the intricate details of the 5m x 5m painting that add further intrigue to the work, as the jagged shapes around the neon yellow middle resemble one of two things: a sixteenth century chastity belt, an item which was worn by women to deter sexual advances or temptation, or the twenty-first century device of the (lesser circulated) anti-rape condom. Considering both these items, it is interesting to see the different ways in which a woman's sexuality has been, and continues to be, placed in the hands of someone other than herself, whether it be retaining honour through chastity, or violently robbed through rape. Whichever idea Bernstein was planning with the addition of jagged teeth on her vagina depiction, (or whether it was a mere allusion to the 'vagina dentata'), it certainly evokes a sense of fear in the viewer, regardless of gender.

Into the gallery's second space, the viewer is faced with 'Birth of the Universe #33', pictured below. The room itself is small and closed, with the addition of a blue LED light embedded in the ceiling in order to allow the painting to glow in the darkness of its environment. As we see in 'Golden Birth of the Universe', a drooping phallic character is seen in the painting, this time taking a much more focal role. Despite its innocent shape and appearance, there is certainly something largely unnerving about these characters; perhaps it is the gaze they offer the vaginal shape and the confusing combination of the wild female organ in comparison to the timid, lowly phallic image. As such, Bernstein continually poses questions about the winners and losers of sex, both the act and the physical differentiation. Being enclosed with the painting in moderate darkness evokes an almost graphic-novel style of terror, especially with the artist's use of bright, neon paint with a dark, star-lit sky as a backdrop. 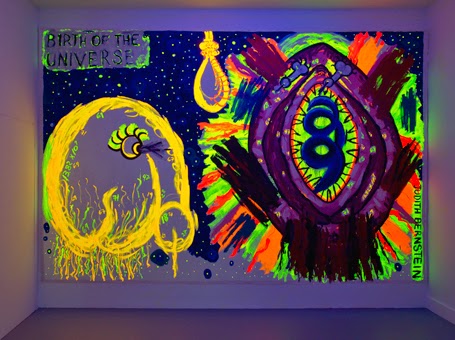 'Birth of the Universe #33' by Judith Bernstein
Image courtesy of www.studiovoltaire.org