As it is now claimed that one fifth of adults in the UK are inked, it seems just to acknowledge tattoo art as a legitimate element of contemporary culture. The iconic Somerset House, WC2, has put on an exhibition exploring the theme of 'time' and all it entails from some of the world's biggest names in tattoo art. Immediately, 'Time - Tattoo Art Today' sets out the decorative binary between life and death in tattooing, using imagery such as butterflies against symbols such as skeletons and decay. Interestingly, although Somerset House showcases art by tattoo artists in various media and on canvases other than skin, the viewer cannot help but notice the irony between their work and the title; the work they have devoted their life to is no 'memento mori', as it dies with the body.

Given that tattoo art is a fairly precarious subject matter for an exhibition in a location as prestigious as Somerset House, an enlightening aspect of the exhibition is the diversity of style between the various artists. It is clear that they have come from a range of backgrounds and have acquired influences from a multitude of sources and cultures. Henning Jorgensen's piece, as one of the exhibit's first paintings, marries both traditional ideas such as the serpent with a large ampersand, around which the snake is wrapped. As an evident satire on the impact technology has had on lifestyle, culture and design, this is an appropriate starting piece, especially to set the position of tattooing in the twenty-first century.

Jorgensen's painting, 'Endless Time', sets up my main issue with the exhibition: many of the titles of the artworks are clichéd and repetitive, reinforcing the notion that the premise of the exhibition was formed prior to any of the artworks having been made. While this is fine, it certainly makes the viewer consider the pieces differently, as it would show curatorial strength to find pieces by the world's most prolific tattoo artists expanding beyond their comfort zones as artists, but instead these have been sought.

The intricacy of the work found in 'Time - Tattoo Art Today' is varied but somehow always relatable, making the exhibition interesting, inclusive and interactive. One truly thought-provoking piece is 'Gravitational Force' by London-based artist, Sarah Carter, pictured below. Once again, the drawing's title undersells the image hugely, as we are offered a humbling narrative into the greater perspective of the artist's work and aspirations. Relating this to tattoo art, we are reminded of the ways in which designs printed onto our skin can reflect the core of ourselves, which is otherwise unavailable to those on the outside. As a piece at the beginning of the exhibition, I believe that Carter's drawing would have been given the consideration it deserves at the back of the Embankment Gallery space; it is certainly not clear as to why the curators, Claudia de Sabe and Miki Vialetto, have used this particular order. 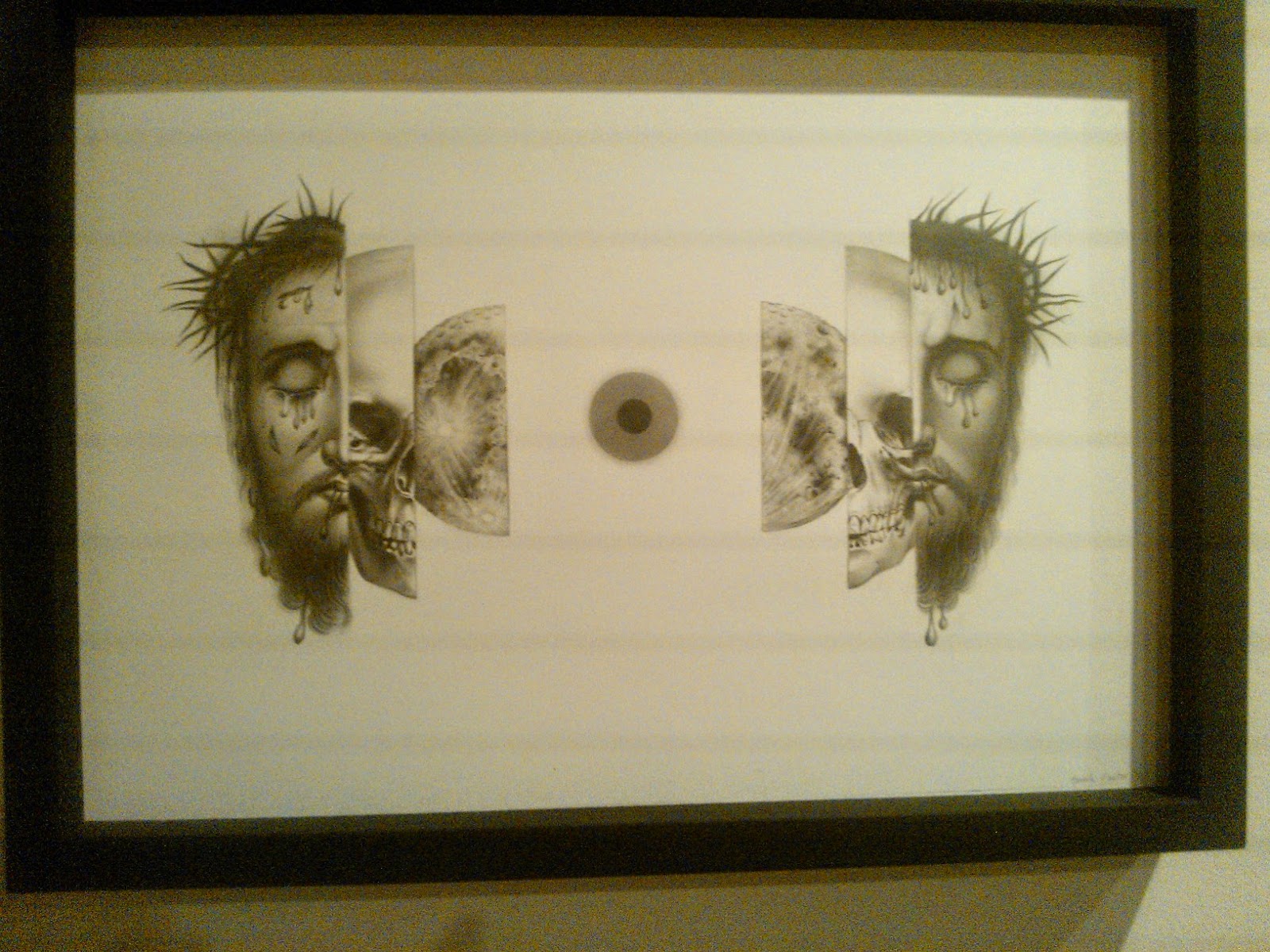 I have already specified that there is a great range of work within the exhibition, showcasing not only how tattoo artists must maintain a strong ability across many subject matter, but gives each artist the opportunity to convey their own personal style, unrestricted by the customer's needs (other than the theme of 'Time', which was the basis of the commissions). Perhaps unsurprisingly, there is a distinct presence of skulls and skeletal beings, often presented poignantly but there is the occasional commission which is not sure of its place within the exhibition. One use of the skeleton is 'Self Portrait 2014' by Alex Binnie, pictured below. Defying the standardised imagery of bone structures and eye sockets, Binnie expresses something of a nature vs nurture debate within his printmaking piece. The artist himself is a diverse player within the art world, being a tattoo artist and printmaker who has also worked in music and performance art. So showing the incoherence between what he is programmed to do as a human versus his artistic endeavours and interests, Binnie presents a personal response to the theme of time and, ultimately, creates an artwork which would also look aesthetically beautiful as a piece of body art. 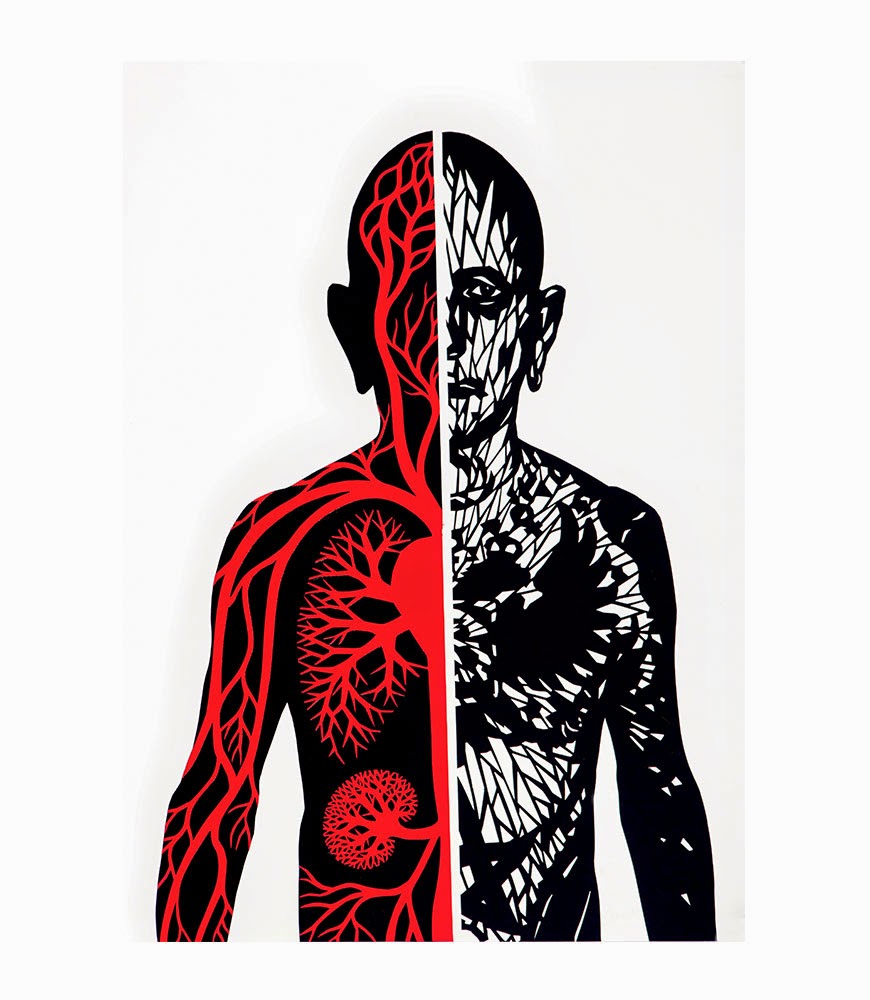 'Self Portrait 2014' by Alex Binnie
Image courtesy of www.tattoolifemagazine.com

While it is clear that each piece holds a strong story and reflects both the artist's persona and inspirations, there are two pieces that must be noted for their potency and individuality. In what seems to be the climax of the show, the final room at the back of the gallery is the location of 'Time' by Thomas Kynst. Again, the artists (who for the most part do not have to name their work) have seemingly not been discouraged from selecting uninventive titles for their art, which will be even clearer with the next piece that I discuss. Despite this, Kynst's painting is my choice for the entire exhibition; it possesses a style reminiscent of intense tattoo pieces, however it addresses the theme in a direct but emotive manner. The viewer witnesses two heads which take up a large segment of the canvas, one which is evidently deceased but appearing peaceful, and the other which shows immense distress, letting out a chilling scream that can almost be heard. Challenging the notions and subsequent clichés of life and death and the moments either side of both, Kynst epitomises what the exhibition is trying to achieve in his single painting.

Finally, although I have only discussed painting thus far, there are several examples of sculpture in 'Time - Tattoo Art Today', which is a brave choice for artists who are famed for their use of ink. I chose not to mention these individually and specifically because while the focus of the exhibition seems to be the influence of tattoo art spreading into conventional media and culture, some pieces such as Henk 'Hanky Panky' Schiffmacher's 'ACBC' just seemed needlessly irreverent and not a meaningful addition. As I progress to the last piece I will talk about, we can reflect on how easy it would have been to curate the exhibition thematically, perhaps from 'gnosis' to 'the body' to 'death' etc. However it is Nicholas Baxter's 'Heals All Wounds', pictured below, which makes us question such dichotomies, as it really disturbs any preconceptions I had about what the exhibition should be saying or doing. Instead we are exposed to the reality, the strain of time. The personal, intimate nature of Baxter's painting declares how much more there is to learn than what we encounter at face value, which seems ironic given that the focus is tattooing, something that is judged almost entirely on its initial aesthetic. 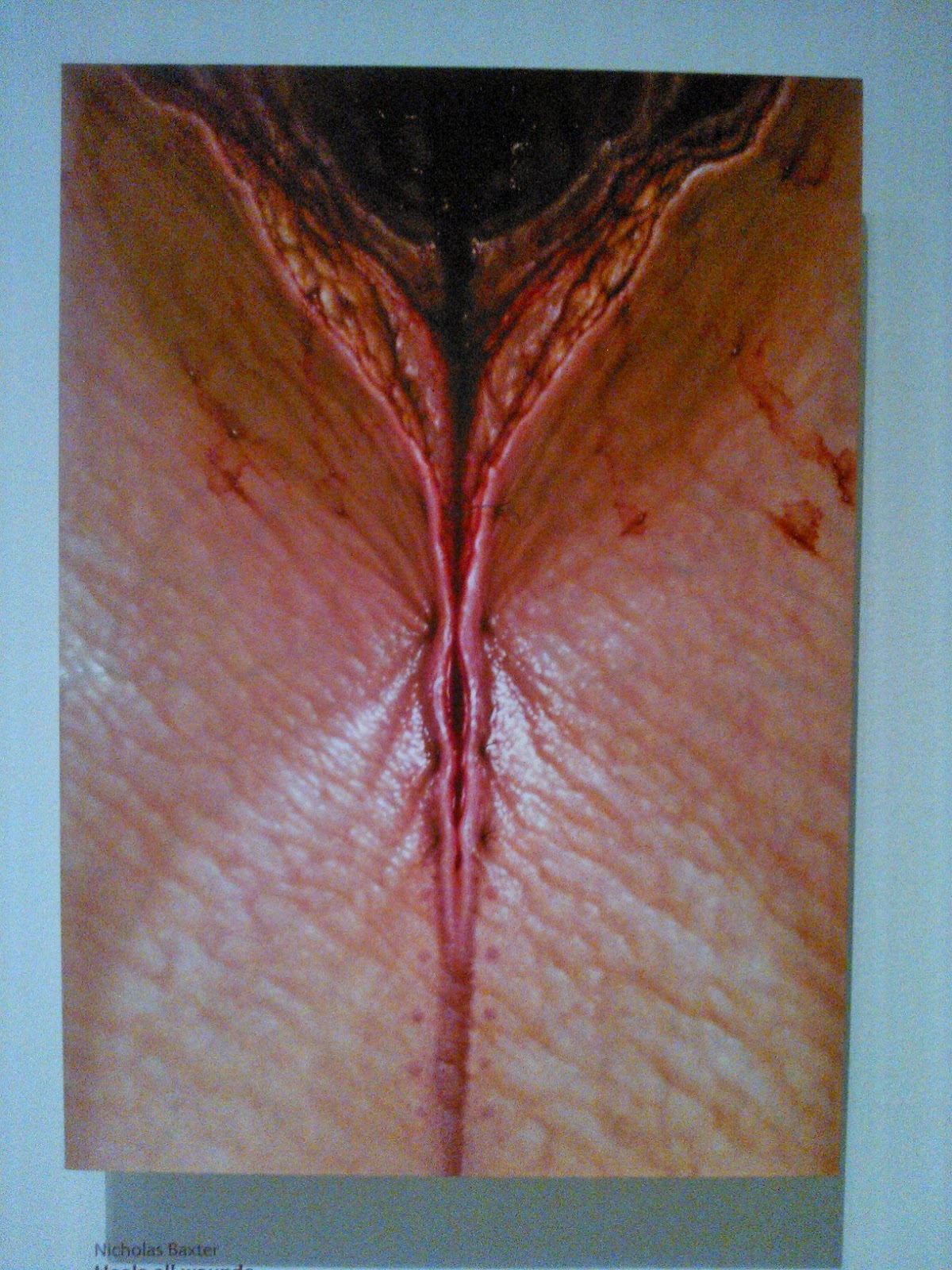