Today I returned to the wonderful Southbank Centre for the latest exhibition at the Hayward Gallery, SE1, which is receiving reviews so mixed I felt even more compelled to see it myself. While looking at the representation of the human form in contemporary art does not seem a particularly original concept, as the body is a common feature in many artists' work, the execution of 'The Human Factor' is generally exciting and tantalising. While I knew that works would include internationally renowned names such as Yinka Shonibare, Isa Genzken and Jeff Koons, I had relatively few expectations as to the presentation and diversity within the exhibition.

Upon entering the space, the viewer is met with several large-scale pieces. As my last visit to the Hayward was Martin Creed's recent show, being met with silence was somewhat unnerving, especially due to the vast expanse of the gallery. Despite this initial reaction, I soon found that while large spaces around some sculptures did exist, many are packed together almost haphazardly. One of the first sculptures to encounter is Thomas Schutte's 'Krieger' figures, pictured below. Towering at three metres tall, it certainly surprised me to learn that it was initially proposed as a war memorial, as standing at close proximity to the sculptures allows us to see that there is a confusing combination of facial expressions on the models: both aggressive and nonchalant, which surely mirror the range of attitudes concerning war. Not only are the facial features ambiguous, but other bodily features are distorted, misshapen and at times stunted, making Schutte's piece one of social comment.

One of the artists whose work shines as part of 'The Human Factor' is German artist, Katharina Fritsch, who has multiple pieces in the Hayward, spread out between the various floors. The first, 'Riese und 4. Postkarte (Franken)', situated behind Schutte's figures, stretches the exhibition's premise of sculpture practice, as Fritsch's work could be viewed collectively as an installation piece. A large canvas is laid out behind a lifesize sculpture of a figure, both of which vary between Fritsch's different pieces. The curator forces us to ask where we are and how our own environments change and shape us at such an early point in the exhibition, setting us up for the identity and ethical questioning we find later on.

The second artist whose work is notably and consistently astounding is Maurizio Cattelan, whose 'retirement' was marked by a retrospective at the Guggenheim New York in 2011. The essence of Cattelan's work revolves around deception and surprises await those unfamiliar with the artist's work, accentuated by clever curatorial decisions. This is most pertinently the case with 'Now', which invites the viewer to peer into the modelled open casket of John F. Kennedy. 'The Human Factor' is about far more than the multiplicity of artistic techniques used in creating contemporary sculpture; with each artist we can see what they are trying to convey about their subject matter and how it relates to the contemporary human condition. Upon entering the room in which 'Now' is presented, the viewer is overcome with a poignant but forced silence which Cattelan seems to evoke in his multiple pieces in the exhibition. (equally if not moreso with 'Him', which is found further along) Despite providing very little art historical context throughout the exhibition, it is a nice addition for some citations to include insight from the artist, and Cattelan's assertion that "some deaths never end" is a sound one which affirms the medium choice of sculpture, as he presents his subjects beyond their death. At the same time, however, it is ironic that a permanent work of art depicting such a prolific figure provided the artist with the conclusion that 'Now' is "making him [John F. Kennedy] die once and for all". 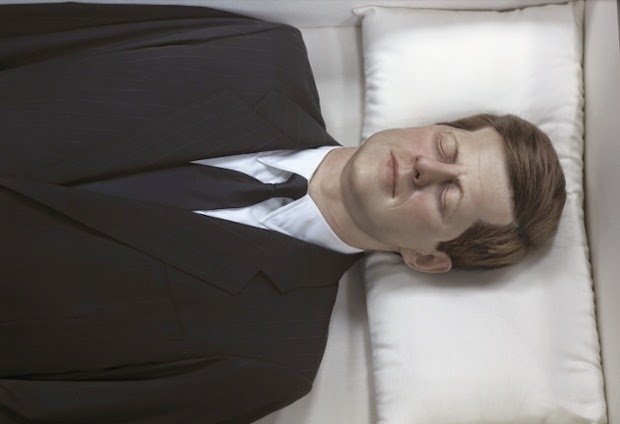 With such a vast amount of works, artists and subject matters, it is inevitable that the calibre will fluctuate. It seems like the further the viewer ventures into 'The Human Factor', the less attention has gone into the placement of each sculpture. As aforementioned, opening the first set of gallery doors into the exhibition reveals a menagerie of pieces with clear heartfelt historical importance in addition to a varying degree of technique: Schutte's 'Krieger', Fritsch's 'Giant and 4th Postcard' and Paloma Varga Weisz's hanging spectacle, 'Falling Woman, Double-Headed'. So after this, it is fairly frustrating to see sculptural works both with salient but very different messages displayed together. This arrives at the point of being almost offensive in the case of Georg Herold's large pink 'Blühendes Leben' model, which again towers above the viewer and certainly benefits from some context, placed close to Thomas Hirschhorn's sculptural installation series of '4 Women', which links four mannequin models with four unfathomably graphic images of war violence, making the cynical but accurate link between the excess of the Western world and its ignorance towards international injustices.

While I appreciate the strong narrative which many of the pieces hold, (I certainly don't think it would be appropriate for all three of Katharina Fritsch's pieces to be displayed together in one room) there are locations within the huge exhibition which do not offer the viewer, nor the sculptures, space for thorough contemplation. One of the curatorial ideas that I believe will ignite the most debate is Cattelan's 'Now', which is situated in the centre of an extended room, being glared upon by Huma Bhabha's bronze erection of  'The Orientalist'. Although personally I found this to be an effective pairing, as both have sociopolitical and transcendental messages, if there were no space restrictions (you would be forgiven for believing there were none after seeing Ugo Rondinone's dedicated room) it would make for a denser atmosphere to display [especially] these two sculptures in isolation.

As I ventured further and further into the exhibition, 'The Human Factor' began to feel like some sort of fun house, where semi-familiar figures are propped at all angles to present you with something new. A fantastic aspect of the Hayward Gallery is, generally speaking, its optimal use of space; with Martin Creed's exhibition we found the stationary car which seemed to wait until you were bored of its inertia before loudly throwing its own doors open and sounding its alarm - all outside on the gallery's second level, boasting London's skyline as part of its environment. While I did not fully comprehend the meaning of (the majority of) John Miller's fairly inane sculptures, I found Pierre Huyghe's 'Liegender Frauenakt', pictured below, to demand attention and thought like few others at this stage of the exhibition. Naturally, the reclining nude alludes to classical portraiture and sculpting, as the exhibition declares that it takes a fresh look at the single oldest subject for sculpture. But excitingly, the concept of a beehive as a head hints at the chaos of contemporary urban living, as the oversized head exerts energy beyond the stillness of the concrete, with live bees swarming in and around it. 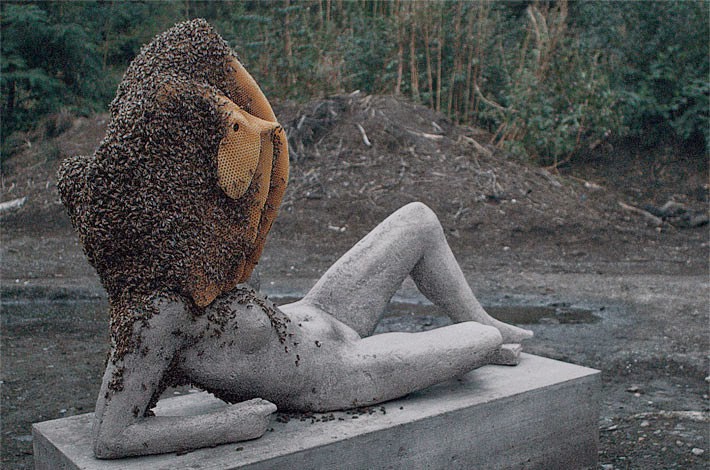 Having viewed each piece in the exhibition, it is clear to see how 'The Human Factor' has divided opinion; I certainly have conflicting ideas about it. Most importantly, the exhibition provoked me to ask questions about myself and made me wonder how I actually feel about the pieces. As an active, and often raging, feminist, Paul McCarthy's hyperrealist piece 'That Girl (T.G Awake)' had me wondering "is this regressive? We can see all of her yet know nothing about her, except for how unnaturally groomed the model is". This escalated into "why can't I appreciate this?" whilst viewing Rachel Harrison's 'Schmatte with President'. There really is so much to experience at this vibrant show at the Hayward Gallery, until 7th September.