In association with both Anxiety Arts Festival 2014 and Crisis, 'Dizziness of Freedom' is the latest exhibition at Bermondsey Project Space, SE1, a gallery with a real community ethos, even supporting the arts education of ex-homeless people. I feel that this is worth mentioning prior to any mention of art, as sometimes with special causes, quality of art is often compromised, however at Bermondsey Project Space this is certainly not the case. This exhibition presents a wide range of media from several artists, which admittedly becomes slightly overwhelming towards the end of the visit, mainly due to the exhibition being given a large amount of space, and the curator's subsequent desire to fill it all.

Having seen a high volume of contemporary art recently, including many graduate shows, it seems that the medium of painting is being overlooked in favour of alternative, seemingly new and exciting ideas such as those explored through video art and installation. With this in mind, I was particularly pleased to see a high calibre of painting talent being exhibited at Bermondsey Project Space, including pieces near the front of the gallery by George Harding. The first of these, 'Split', pictured below, conveys the mental and emotional isolation and seclusion that can feel like it is evolving into physical barriers and distance. A dark background highlighted by the male figure and a beam of light on the left side of the canvas suggests solitude on an intergalactic level, perhaps as an allegory to the role of humans in society and how our lifestyles are both individualistic but very much collective at the same time. Interestingly, the press release tells us that the artist "focuses on human relations and our endeavour to transcend the human condition", reinforcing the idea of strong individualism, where we somehow feel as if we are superior to what has gone before us. 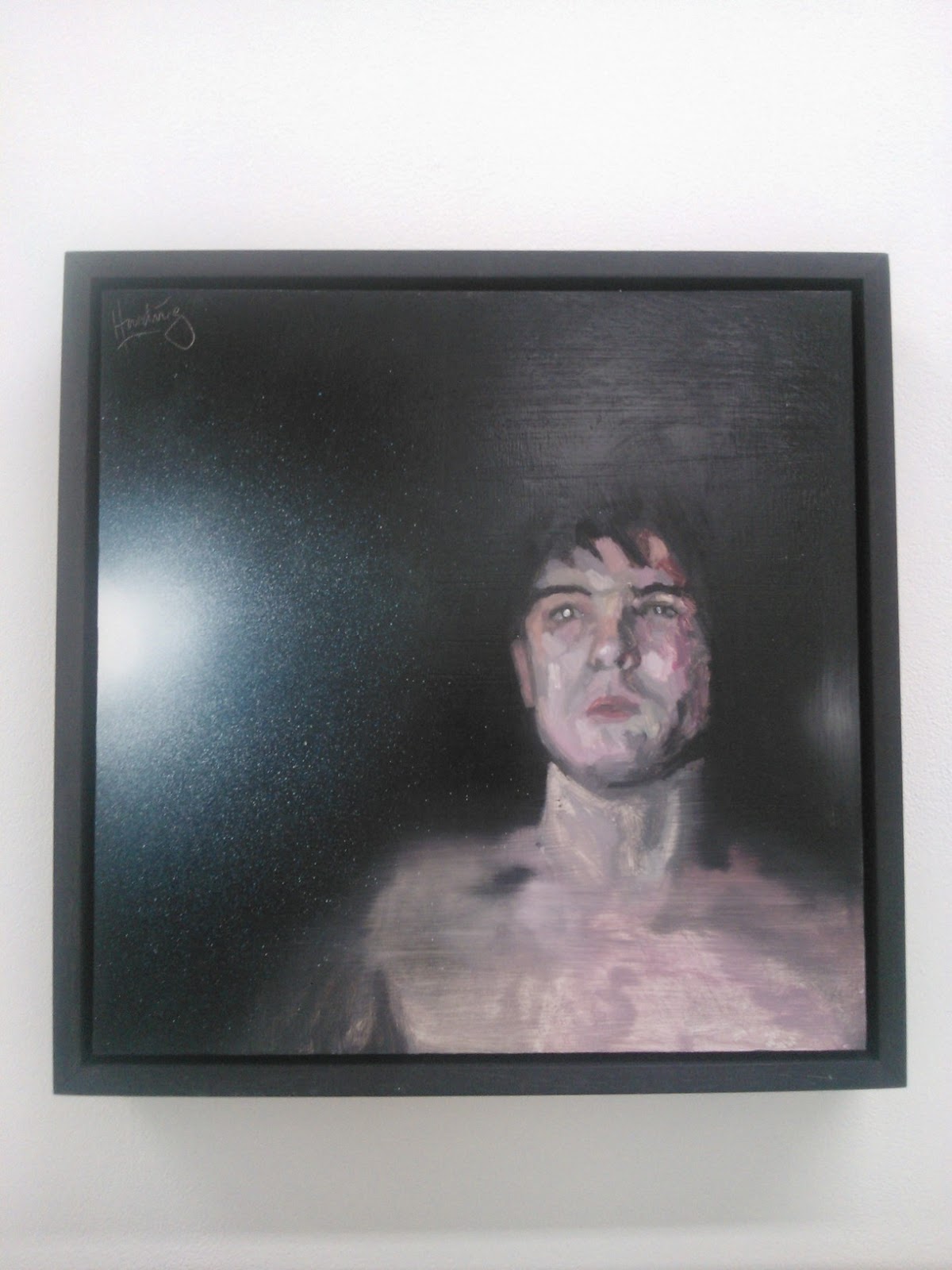 From one painter to another, I would like to look at David Bradley's series of portrait-style paintings, boasting a "theatrical intensity" which sets them apart from Harding's dark, evocative canvases. As something of a satire on contemporary social hierarchies, the artist has included a stark red nose on each smart-attired male subject, making the viewer's awareness acute to how ludicrous it is to have social rankings, despite being a supposedly enlightened society. The comical nature of Bradley's presentation of the portraits is conflicted with the subtly distressed expressions on each subject's face. It is at this point, and various others throughout the exhibition, that it is important to implement the driving force of 'Dizziness of Freedom', which is a phrase from nineteenth-century philosopher, Søren Kierkegaard: "Anxiety is the dizziness of freedom".

Neatly curated in a side segment of the gallery are two large video screening areas. The first 'cinema' area plays Louise Fitzgerald's 'Create a Person' short film, following the artist's focus on "notions of aspiration, ambition and anxiety", which excitingly is a combination that most, if not all, of Fitzgerald's viewers will be able to relate to. The video itself shows a group of young actors, "volunteering as a way to develop themselves personally and professionally". Instantly, the viewer can decipher that Fitzgerald is making a satire of the current faux-employment situation, which is especially unprecedented in the arts, where practitioners are often expected to offer their work for little to no money. The actors' repetitive boasting of "gaining practical experience" is somewhere between hypnotic and infuriating, as 'opportunities' such as exploitative, unpaid internships are hinted at, which are thrust upon young people as necessary for career development. Though the viewer finds the video piece to be effective and thorough, the self-declared "humorous approach" of the artist's work makes the reasoning for using volunteers somewhat open.

As could be expected with the rise of technology, the field of photography has expanded and flourished in recent years, and 'Dizziness of Freedom' does not overlook this. Jane Fradgley's collection of four photographic works evoke something of a literal 'dizziness', as we see a fleeting moment captured and manipulated through the lens. In relation to anxiety and the exhibition's title, we can see how modernity and the rapid pace of progress can leave us feeling left behind, even obsolete; the confusing medium between movement and inertia expressed in Fradgley's photographs is confusing yet leaves the viewer wondering whether we are truly making progress or stuck in a state of hindsight and nostalgia. 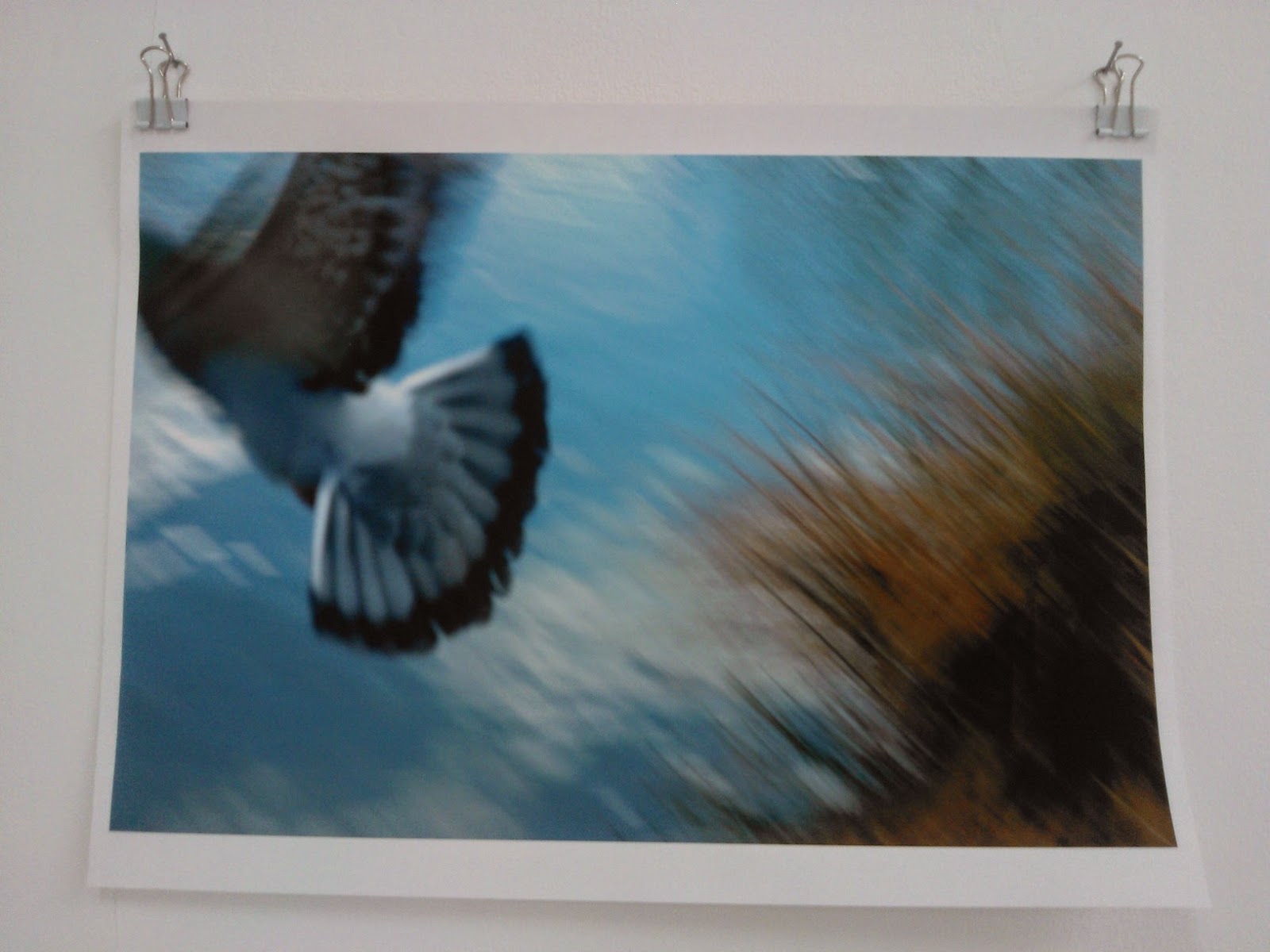 
'Dizziness of Freedom' is an excellent collection of work focusing both solely and abstractly on mental distress and uncertainty, a topic which is and will continue to be very difficult to base work on, but with ongoing projects and research into removing mental health stigmas, there certainly is hope. While I would love to address each work on display, there really is so much to explore that it should be seen first-hand to fully absorb. In addition to this there is also the element that so many different media are present that placing them all in one written post may be something of an overwhelming read. A special mention goes to the two small video screens showing Nu Li's 'The World, Inside and Outside', which are both entertaining, hypnotic and truly thought-provoking.