It truly is an incredible time to be living in London; the diversity of today's contemporary art has never been more exciting and there really is something to cater to all tastes. At Space Station Sixty Five, SE11, an intriguing collection of work by feminist artist, Maureen Burdock, addresses salient issues concerning twenty-first century women. The exhibition is divided between two comic book-style stories: 'Mumbi and the Long Run', based on a high-achieving Kenyan runner and an incident that continues to affect her family, and 'Halima: A Future without Female Genital Mutilation', a story by a Sudanese journalist that tells the true, graphically terrifying tale of how Female Genital Mutilation (FGM) was imposed on her on an intimate level. Although the exhibition is marketed as conveying 'feminist fables', the viewer should not underestimate the serious nature of Burdock's message.

According to its press release, the artist hopes to inspire women, as the project "increases awareness of women's struggles worldwide and the need for elimination of the injustices they experience". This brings me on to the main 'graphic fable' of The F Word Project, telling a tale of Mumbi, a Kenyan runner who has relocated to train in Sante Fe, which is heartwarming and heartbreaking in equal measure.  The first story board begins with Mumbi dreaming of her late sister, who died after an infection following a Female Genital Mutilation procedure. Whereas many contemporary artists highlight topical issues in experimental or avant-garde ways, 'The F Word Project' uses the figure of a relatable character and in the case of Mumbi, feelings and inner conflicts to deliver her cultural and political message to the viewer. 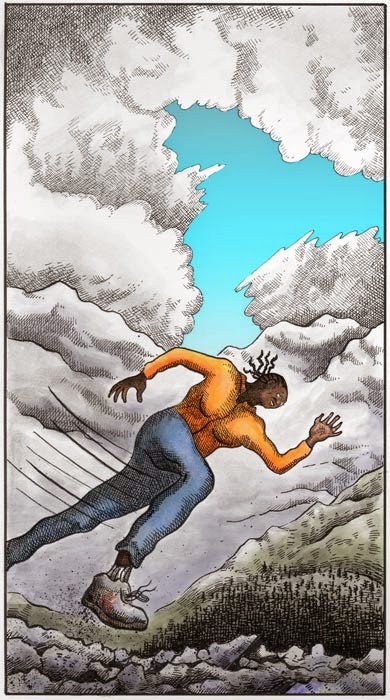 Image from 'Mumbi and the Long Run' by Maureen Burdock
Image courtesy of www.spacestationsixtyfive.com

While it would be easy to talk my readers through the entirety of 'Mumbi and the Long Run', which trails the viewer around the gallery, I believe it would be more respectful to the work of both artist and gallery to just highlight some points that accentuate the exhibition's title and reinforce its ideas. It is known that the protagonist of the exhibition's second graphic novella is a real woman, who devised the story based on her own experience, however it is not specified whether Mumbi is a fictional character or not. Dreams are often used in literature and film to convey foreboding, or something subliminal. The dream that is presented at the beginning of this story features our female protagonist and her deceased sister, who is alive in the dream. Poignantly, Mumbi tells her "I'll protect you, sister!", implying her own struggle against FGM, which we soon learn caused her sister's fatal infection. Something I found particularly moving about Mumbi's story is the fact that it really is a 'feminist fable', in that it addresses and highlights various female issues, beyond the horror that is FGM, towards more domestic aspects such as the bond of biological sisterhood.

So later in the story, as a runner Mumbi is offered a sponsorship by a company called Pestlé (not too difficult to work out which one is trying to be conveyed here) and she faces an immediate internal conflict between her morals, as the company forced their baby formula onto mothers who did not have access to clean water, thus infecting thousands of babies in Africa, and the potential good she could do with the large sponsorship money. This is another debate that many women face in various ways, including whether to go back to work after having a child versus staying at home and looking after it. Mumbi's endeavour to find balance between her conscience and her aspirations forms the pivotal tension in the middle of the story and encourages the reader to consider how they might solve the dilemma. Importantly, during this time a friend tells Mumbi to "see what your dreams tell you".

Of course, I will not reveal how the story progresses and finally ends, but it is a truly inspirational tale of working fearlessly to achieve your ambitions to make the world a better place. It sounds cliché but it is true. This is not to say that we can all change huge political and cultural ideas and traditions, however where we see any level of injustice, we should be driven to make a difference.

In the second and final segment of the exhibition, which is housed in an internal gallery space within Space Station Sixty Five, we see Maureen Burdock take the role of artist again, while this time journalist Halima Abdel Rahman has written the story, which is true, of her experience of FGM when she hit puberty. Although the story of Mumbi and her sister's legacy is touching and inspiring, the entrapment of the viewer within the extra three/four walls of this second space surely reinforces the reality of FGM, especially relating back to Rahman's story. For real impact, I wholeheartedly recommend visiting the exhibition in person and immersing yourself in the brutal story, which has affected so many millions of women worldwide. However for many viewers in the UK this will be their first graphic understanding of exactly how traumatic and violent the procedure is. There are upcoming events at the gallery based around the exhibition, which I thoroughly recommend (for both myself and my readers) in order to gain a wider understanding of such a life-threatening cultural tradition.