The category of 'candid photography' seems to have peaked and declined, in regards to contemporary art. This is due largely to the excess of photographs we are bombarded with on a daily basis through the internet and social media websites. However, in the environment of the Howard Griffin Gallery, E1, Bob Mazzer's body of work observing the domesticity of the London Underground seems just as relevant and intriguing now as when the photographs were taken, in the 1980s. As a young viewer, it really is illuminating to see the vast differences between the tube of a mere thirty years ago and the present day. The exhibition's title suggests a visual exploration beyond the realms of London's transport system, into the unknown, perhaps implying sub-culture representation. Either way, this collection is a heartfelt one, and does not show any hints of being contrived, which is always something viewers tend to consider with photography projects like 'Underground'.

Within the exhibition, there is an immediately intimate and jovial feel to the images, when assessed both individually and holistically. It would not be difficult to imagine 'Underground' as something of an introduction to modern urban life, to outsiders. Fortunately, each photograph encompasses inclusion and acceptance of various cultures, traditions and lifestyle choices. Images such as 'Peeing and Romance', pictured below, which is fairly self-explanatory, charts the contrasts of urban life, while also somehow maintaining the charm which runs through Mazzer's photography. The sharp edge of the brick wall separating the lovers and the lone man proves a division which extends beyond the visual element of the piece, showing how obliviousness is rife in modern day life, as although our cities are more populated than ever, we still manage to be willingly unaware of the issues surrounding us and our neighbouring communities. 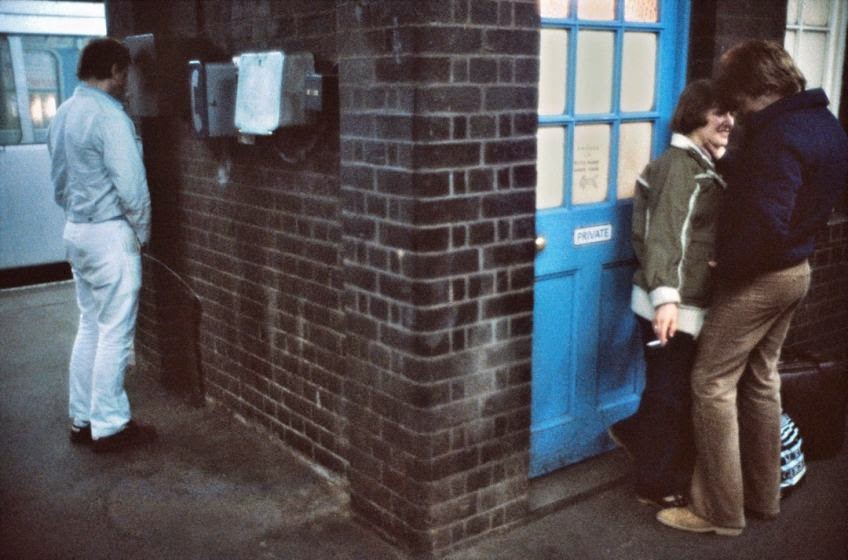 'Peeing and Romance' by Bob Mazzer
Image courtesy of www.howardgriffingallery.com

Reading the exhibition's press release, viewers will learn that Mazzer took these images while commuting to King's Cross in the eighties, so it should be no doubt that they are in fact spontaneous snapshots of city life. Years within and surrounding the 1980s produced many, of course socially constructed, stereotypes and trends and the photographer is not shy in putting these on display. The beautiful 'Portrait of a Girl', which sees an alternatively dressed young woman in the black and white frame of the photograph staring intensely into the lens, with a look of disdain and, most potently, the rebellion to which her look pertains. Although the theme of the exhibition gives the sensation of embracing a passing moment in time,  the word 'Portrait' suggests that Mazzer views beauty and importance in not only the hidden minutiae but in highlighting the extraordinary as well as the super-ordinary, the viewer is left with a large scope of 'reality'.

Although as a viewer I am happy to believe that the photographs are largely uncontrived, there is a strong heart in most that, in 2014, seems hard to imagine as being unstructured. 'Reading and Sleeping', for example, from 1971, seems to have a message of unity which overrides the technicalities of the photograph. The merging of various social groups is something that is largely celebrated in twenty-first century London, but in this photograph we are reminded of how certain groups have suffered isolation and marginalisation. It does appear that this photograph has been lovingly constructed, as the small physical proximity between the two figures in the image is accentuated by the space next to the young boy. 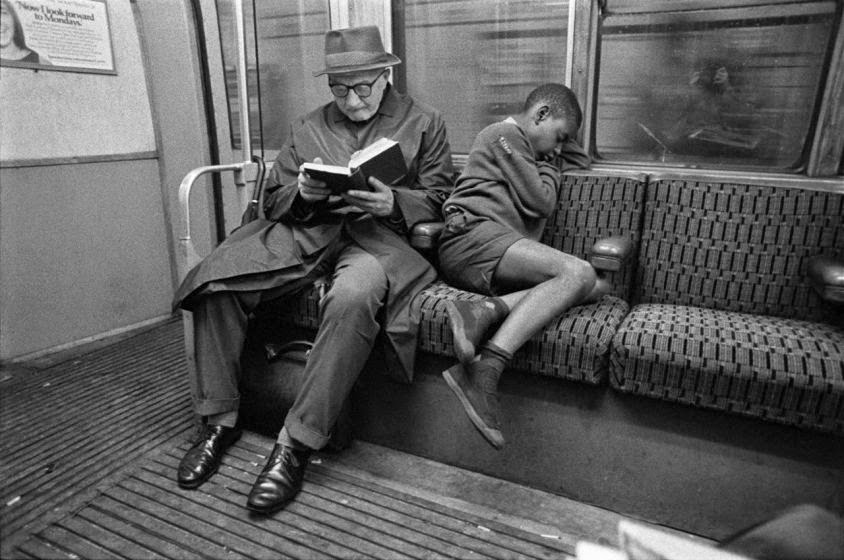 'Reading and Sleeping' by Bob Mazzer
Image courtesy of www.howardgriffingallery.com

While it cannot be argued that the vast majority of Mazzer's photographs are artistically sound, the real appeal of 'Underground' is how the viewer truly feels as if they are witnessing an almost historical document, image after image. Several provide a comic relief, such as 'Beer and Whiskey', which sees two women drinking the beverage from glass tumblers while sitting daintily on the tube. This vision of displacement is an interesting one and does seem to flow in various ways throughout the collection; regarding the exhibition through today's eyes we are reminded of the public smoking and alcohol consumption ban on public transpor. There is no doubt that the eradication of alcohol and cigarettes makes the underground considerably more civilised, however as is common with nostalgia, the viewer cannot help but notice the increased control that seems to have been placed on commuters since the photographs were taken.

Perhaps the most poignant part of the exhibition is the assessment of the human condition, which is validated by the somewhat mundane setting of the London commute. We witness romance in several naive snapshots, which is a pleasant departure from the hyper-sexualised imagery we often find in contemporary art. Beyond glimpses of everyday life, we also encounter the bizarre, such as 'Clown on New Year's Eve' and stills which leave the viewer desperate to find out where the life of the subject matter progresses. This is certainly the case with the use of the underground lift, which is featured in one image within the exhibition, allowing us to see the perturbed look on a male traveller's face as he descends, which is of course, poetically poignant.