With my current interest and research around futuristic and fantastical architecture, I was intrigued to see that London's branch of Erarta Gallery, W1, which specialises in contemporary Russian art, is currently exhibiting works by four major artists, "united by their examination of mystical vision". While this exhibition is not focused on architecture as such, each piece conveys a fantasy world, whether it be through landscapes, figures or abstraction.

The gallery's decision to exhibit a selection of a mere four artists is a wise one, in that the viewer can experience the true nature of each artist's work and explore their key themes and ideas. Perhaps most interestingly is the way that we are able to bring our own perspective to the environments that are presented to us. This is most distinctly the case in the work of Veronica Smirnoff, whose practice adheres in various ways to traditional elements of her Russian upbringing. (For example, the oak panels she uses as a canvas are obtained from a monastery near Moscow) With her recent painting, 'Partus', the title of which refers to the delivery of a newborn child, the viewer is met with a large canvas which although being busy is trapped in the stillness of the contemplative expression of the figure's face. The elaborate costume worn by this delicate figure is somewhat reminiscent of the umbilical chord and forces the viewer to feel the combination of isolation and bewilderment facing us as we step out of our comfort zones, represented here with the transition from womb to world. 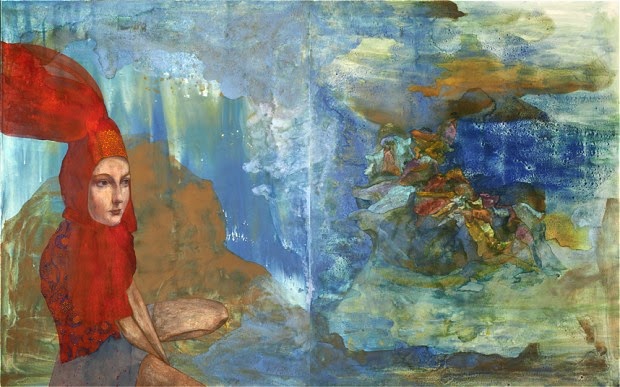 Considering Smirnoff's work from a feminist angle is entirely illuminating, especially whilst regarding two of her other paintings on display at Erarta, 'Red Commissar' and 'Bathsheba'. Press release material surrounding the exhibition states Smirnoff's work as depicting "single females set in landscapes", and in 'Red Commissar', referencing the Soviet military of the Russian Civil War, we are offered a humble alternative to the ferocity that is usually (rightly) associated with war. As another isolated space, 'Red Commissar' displays the transhistorical confinement of women, supported by the statement citing "Oriental influence", hinting at further exclusion as an 'Other'. As a final point of interest, the earthy tones of greens and beiges which form the background could also be interpreted as highlighting how in nature, women are clearly essential in the continuation of the human race, however are still not treated as such.

Next we have Evgeny Zaremba, an artist who works with what has been termed "visual poetry". Even as a mere concept in itself, this sounds beautiful. Paintings such as 'Lightning', pictured below, which sees the artist using thick oil paint and expressive colours in order to produce an almost performance element on the canvas, shows the calm chaos which swiftly runs through each piece within the exhibition. In this painting, the potential impact of the lightning on both the scenario and the canvas is declared, as the ominously bright yellow controls the viewer's gaze and we are left to decipher the content of the painting. 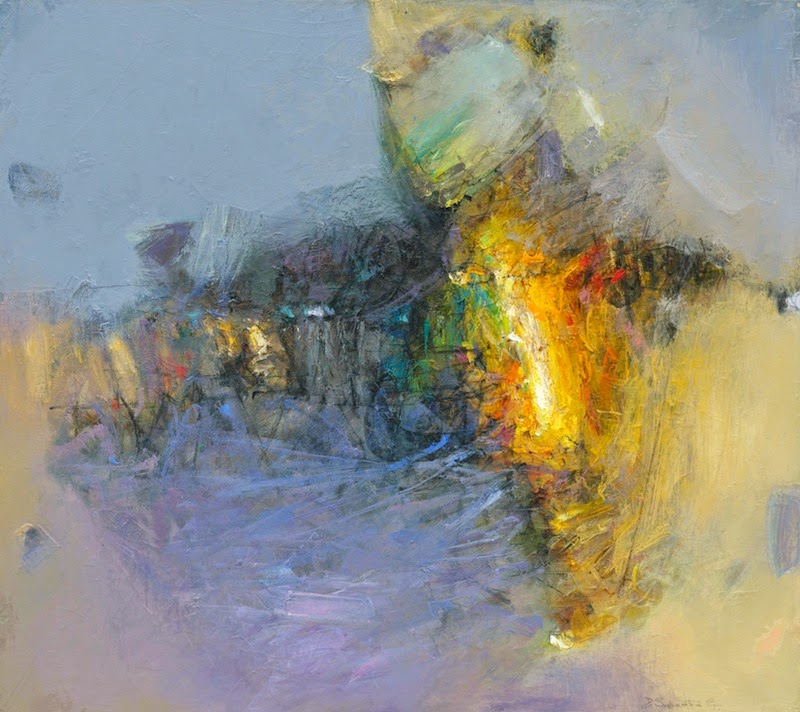 Given the gallery's niche of contemporary Russian art, it is interesting that Erarta itself is using the slight cliché of citing their artists' inspirations as "the traditions of icon painting in [Smirnoff's] native Russia". This linked my line of thought with the current Tate Britain exhibition on British Folk Art, and questions whether we can (or should) always link our culture and identity to our work, whether it be domestic mannerisms or creative expression. On from referencing Smirnoff's heritage, the gallery poignantly highlights the "fragile and precious reality" which each artist is representing from their own experiences. It is clear that a canvas can never truly embrace the multi-sensory experiences of episodes of real life, however different techniques used can provide some insight with these and allow the viewer to gain a space to bring further vitality to the art from within themselves.