Exploring the connections and subsequent hierarchies between various social stances and nature/the animal kingdom is something that is not entirely rare in contemporary art. The way in which artist Suky Best highlights this is intriguing, profound and, at times, sinister. Comparing the grandeur of middle-to-upper class Western lifestyles with the natural world by merging them in the same frame displays this effectively and allows the viewer to insert themselves into the artist's mindset. Danielle Arnaud Gallery, SE11, accentuates human and animal development with its home-like environment and purposefully light-deprived rooms, granting the viewer access to this sacred yet very much domestic space.

So, as I have already hinted, the physical setting of Best's work is very much integral to how the viewer perceives the pieces. Upon arrival at the gallery, the initial sensory reaction is most definitely the soothing ocean sounds coming from the artist's 'The Sea House' video piece. As can be seen in the still below, the artist employs a large element of mystery around her work, only revealing a small section of the video at a time, while a large black space stalks around the rest of the screen. Best's fascination with the "clash ocassioned by encounters between well-groomed domestic interiors and nature run wild" is salient in understanding her art, as we are presented with images of bourgeois homes being overthrown by wild animals, predominantly birds. In the case of the scene found in 'The Sea House', which seems to introduce Best's initial ideas in preparation for the rest of the exhibition, the water calmly consuming the house seems to be a satire on the treatment of nature by the rich, highlighting the plight of our environment despite its strength.

Still from 'The Sea House' by Suky Best
Image courtesy of www.daniellearnaud.com

Alongside the video installations, Danielle Arnaud is also showing several of Best's jigsaw canvases, where  either five hundred or a thousand individual pieces comprise an image which adheres to the theme of 'Wild Interior'. Images such as 'Cottage Row (Wiltshire)' both entice and isolate the viewer, as the majority of the jigsaw pieces are a solid black, much in keeping with 'The Sea House'. Taking no decoratively smooth form, a glimpse of  'Cottage Row (Wiltshire)' is finally exposed amidst the black puzzle pieces; considering the title of the exhibition, this piece evokes some momentum for the remaining ideas that viewers will encounter in the next works.

Departing from the Hall gallery space, both the pieces and ambiance intensify, and in the 'White Room' space, the viewer is presented with another film, 'An Observation of Flight'. According to Best's website, this piece must be "projected as large as possible in portrait format", allowing a truly encompassing viewing experience. The title of this video is certainly interesting, as again we witness the crossover between the natural world and human intervention; the film is no 'observation', as we are presented with a computerised blue screen as an artificial alternative to the sky, with a similarly animated white bird exploring the space. This backdrop includes grid lines, showing the restrained liberty of wildlife due to the dominance of humankind.

With respect to the work and curation of the ground floor of Danielle Arnaud, it is really the 'Green Room' space upstairs that holds the climactic value of the exhibition. Having visited the gallery during daylight hours, it was particularly startling to enter an empty room in total darkness, except the light stemming from the two filmic pieces being shown: 'At Betty's House' and '54 Morning Lane', both of which seeming to be a follow-up from 'Alwyn Park House', which is being shown downstairs. So the first two videos I mentioned, a still from one of which is pictured below, are shown concurrently within the same gallery space, heightening the tension further with eerie imagery and their conflicting sound effects. This room also boasts the appearance of a middle-class domestic space, in keeping with the themes found in both videos. 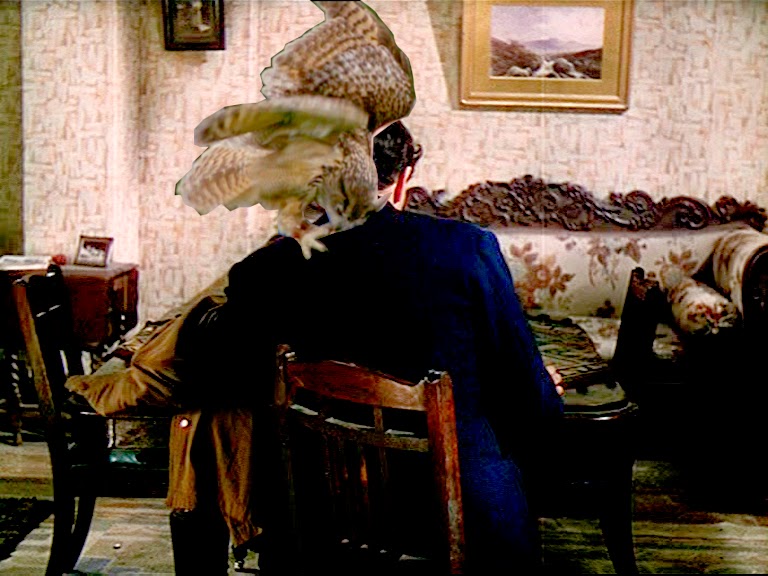 The main attraction of the room, the shorter 'At Betty's House', is shown on a large screen against the sinister darkness of the room, where we witness an in-depth view of an exquisitely decorated but hauntingly empty house, which has yet again been overthrown by animals. Situated within the darkness of the room, the viewer is guided through the subject matter, which lacks human presence from beginning to end, allowing us to create a rapport, or at least some understanding, with the behaviour of the animals within the human habitat. Intriguingly, Best uses scenes from the 1941 film, 'This Happy Breed', with which she overlaps footage of nesting and flying owls. This presentation of such ideas coincides neatly with Best's MPhil research degree, which sees the artist "investigating the relationships between birds and film". In addition to this being such a specific research area, knowing this illuminates the visions of freedom and lack thereof which are conveyed in much of Best's work.