Regular readers of this blog will be well aware that I am fiercely loyal and proud of my home city. But with this loyalty comes a slight cynicism of any artist trying to represent the capital, so naturally I was intrigued to hear that the Curious Duke Gallery, EC1, is currently showing a collection of work by Andrea Tyrimos, who specialises in the depiction of urban landscapes and their real characteristics and qualities. The 'z' at the end of the exhibition's title suggests a contemporary, unadulterated twist, and this is an expectation which is certainly fulfilled.

Tyrimos presents the city (I say 'the' city, but the artist does state that her work is inspired by both London and New York) as a vibrant, dynamic place, where there is constant mystery, intrigue and ambiguity. Viewing works such as those at the Curious Duke Gallery in an urban setting allows us to relate to the paintings personally with one's own anecdotes and ideas. 'East End Shadows' is perhaps the first image that this applies to, which confuses the eye by being both soft and bold, merging deep dark tones with an almost 3D neon effect to convey not only the continuity from day to night, but the artificiality and perhaps expectations of city nightlife. This binary effect combined with the anonymity of the human figures creates something of an ominous, if not sinister, atmosphere within the canvas, evoking the side of the city which contrasts the glamour and landmarks. 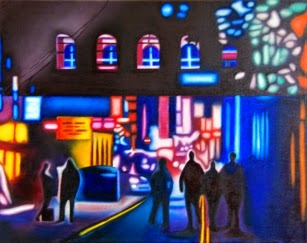 As nowadays it is so easy to be overwhelmed by technology and its progress, 'Death of the Phone Box' is a painting that forces the viewer to reflect on the changes that have occured not only within our personal lives, but society as a whole as a direct result of technology. In this body of work, we are granted access to the various dimensions of the city, away from any stereotypes or preconceptions. Illustrating a man occupied with a mobile phone positioned next to a red phone box shows the unapologetic progression in technology, leaving customs behind. However the bright colours that have been utilised for the phone box highlights the object both literally and figuratively as it remains a constant London landmark, despite its spiral towards redundancy.

There is no doubting the youthful vibe to Tyrimos' work, which is perhaps most evident in 'Rooftop Dreamin'', in which we see two young men, one smoking a cigarette and the other holding his mobile phone to the sky, perched on a rooftop in front of St Paul's Cathedral. Here the viewer finds something of a paradox between the dominant presence of the cathedral's Baroque architecture and the foreground where two youths are participating in what might be considered as anti-social behaviour, merging the idealisation of British past with the less appealing reality of the twenty-first century and the seemingly constant need to rebel. It is difficult to ignore the value of the painting's palette, as the two figures are presented as boldly and beautifully as the background architecture. 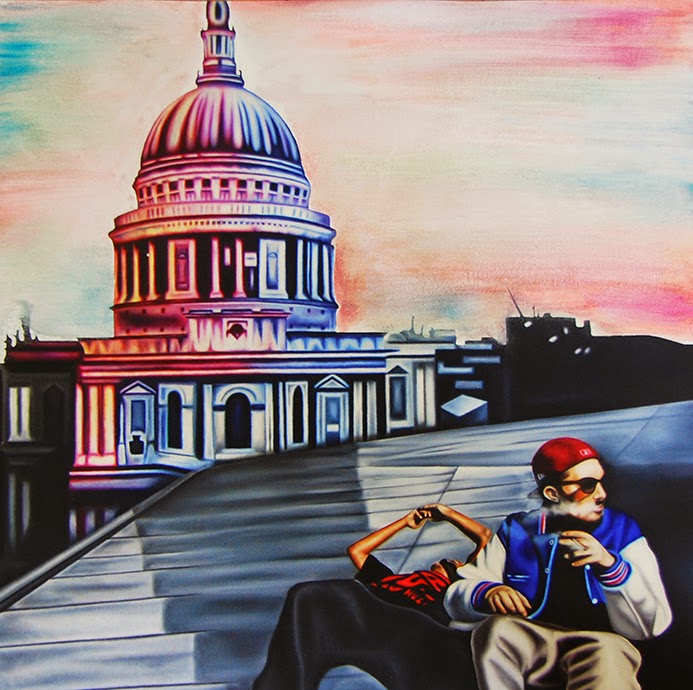 The flavours of the city extend beyond its physicality towards the true ambiance of the people, the places and the relationships within its borders. Beyond the figures of what we see lies a strong, colourful landscape in each painting, which has its own voice over the composition. Images such as 'Carnival Kiss' shows the multicultural, all-encompassing nature of the city, and how events inspired by other nations and cultures have become interwoven in the fabric of the capital. One of the positive aspects of twenty-first century London is that its identity is so ambiguous, entirely open to interpretation and manipulation, but as we found during the 2012 Olympics, we are still very much a community. Considering this ideal, Andrea Tyrimos presents a collection of paintings showing some of the images that form the face of one of the world's most prolific cities.