Located in one of the most consistently dynamic regions of London, the Unit 24 Gallery, SE1, presents a group exhibition based on the depiction of reality merging with the imagination. Curated by two of the featured artists, the exhibition displays a mixed media representation of how we escape into fantasy.

Utilising multiple artists and media allows the viewer to feel truly involved with and immersed in the exhibition, in that we have the capacity to interpret what we can in different ways, whether the active interests of the viewer include sculpture, illustration, or anything in between. First I will address Chiho Iwase's sculptural piece, 'Angel', pictured below, which abandons the features of a traditional  angel in favour of a standard adapted human form, accentuating the possibility of mankind possessing the spiritual, as opposed to physical, traits of an angel. With the gaze of the sculpture angled upwards,  this could infer our weak, submissive nature, which demands instruction and guidance, regardless of how important and dominant we think we are in physical form. Again referring to the upward gaze, this suggests looking to or for a higher plane, bridging the space between existence on earth and what occurs in our minds. 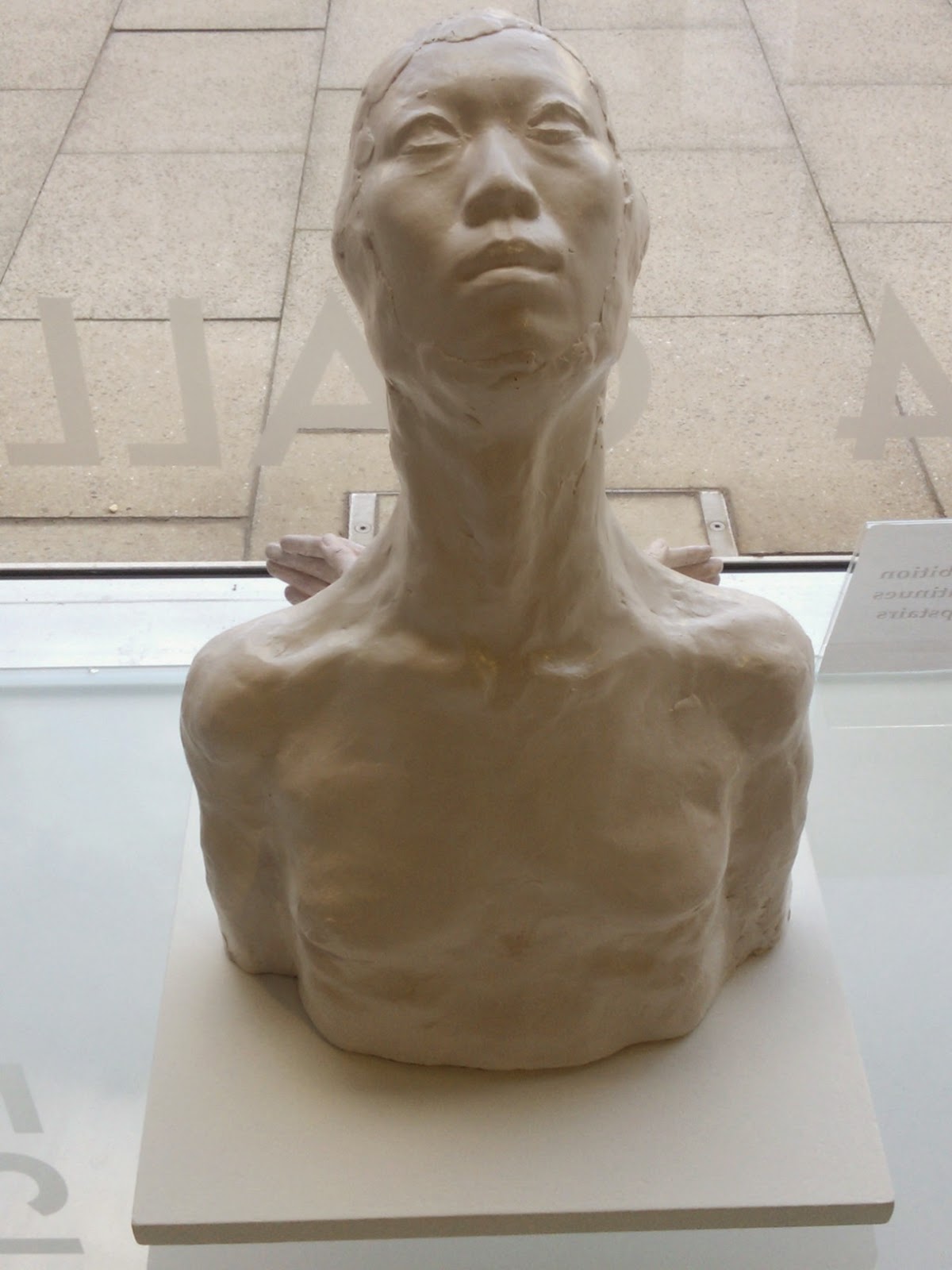 Having researched Iwase's portfolio, it is evident that some of his primarily sculptural work is highly disturbing. His website features his work from 2005 to the present, and is certainly worth a look if dark subject matter appeals to you. Also as part of 'Standing on the Frontier', but more eerie than sinister, is the 2010 collection of 'Small People'. Here we find many 4x3x9cm figures representing a collective, perhaps providing a satire on the insignificance of the individual. Since in the context of the world we find ourselves to be minuscule,  there is instead a focus on our emotional and mental existence. 'Small People' is presented in two displays within the exhibition, one of which is something of a human skittle scenario, as one figure lies on its front, as if frozen in motion before plunging into the remaining figures.

Perhaps the best example of mixed media experimentation throughout the exhibition is Susan Eyre's captivating 'Yellow Sky' canvas, pictured below. It is firstly the title which draws the viewer's attention to the intriacy of the image, as with a different title, it is possible that the viewer would completely overlook the ominous yellow background. Having heightened the attention of the viewer, the artist has then ensured that we interrogate the rest of the image, paying attention to the beautiful detail that Eyre has incorporated into the image. According to the artist, the piece "is about looking for refuge and reliance on a controlled environment to survive"; yet while naturally we would assume that our home and sense of place is physically grounded, our mental state and imagination is equally vital in achieving this security. 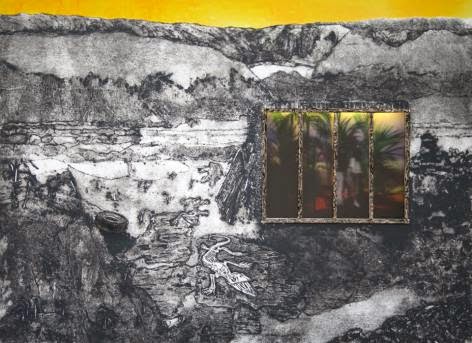 Many of the works featured in 'Standing on the Frontier' are decoratively beautiful in addition to depicting a poignant equidistance between reality and fantasy. Lee Edwards' drawing, 'Tight', pictured below, appears to be a material representation of human emotion, something that ascends physical existence into the realm of an individual sensory experience. The form of the folded garment in Edwards' illustration resembles that of a heart; the domesticity of the object signifies the relationship between the mundane and the internal, as there is a strong sensation of tension in the image, in contrast to how freely flowing the garment would usually be. Two pieces that cannot be ignored, for their startling yet simple beauty, are 'DH Lawrence x2' and 'Fitzgerald, Kavanagh and Bulgakov', from Charlotte Bracegirdle's '100 Great Writers' series. The mystery and ambiguity that surrounds traditional and historical authors is something that has captivated readers for many years. How important, or even necessary, is it for a writer to conceal their own identities in forming fiction? 'DH Lawrence x2' isolates the writer's mouth, highlighting the significance of his words. Considering the title of the series, the artist is conveying that the work of these great writers overshadows and dominates their public identity. As such, 'Standing on the Frontier Volume 2' is an engaging journey through the ideas of artists beyond the logical and may be a worthwhile visit for anyone interested in the ideology of surrealism from a contemporary stance. 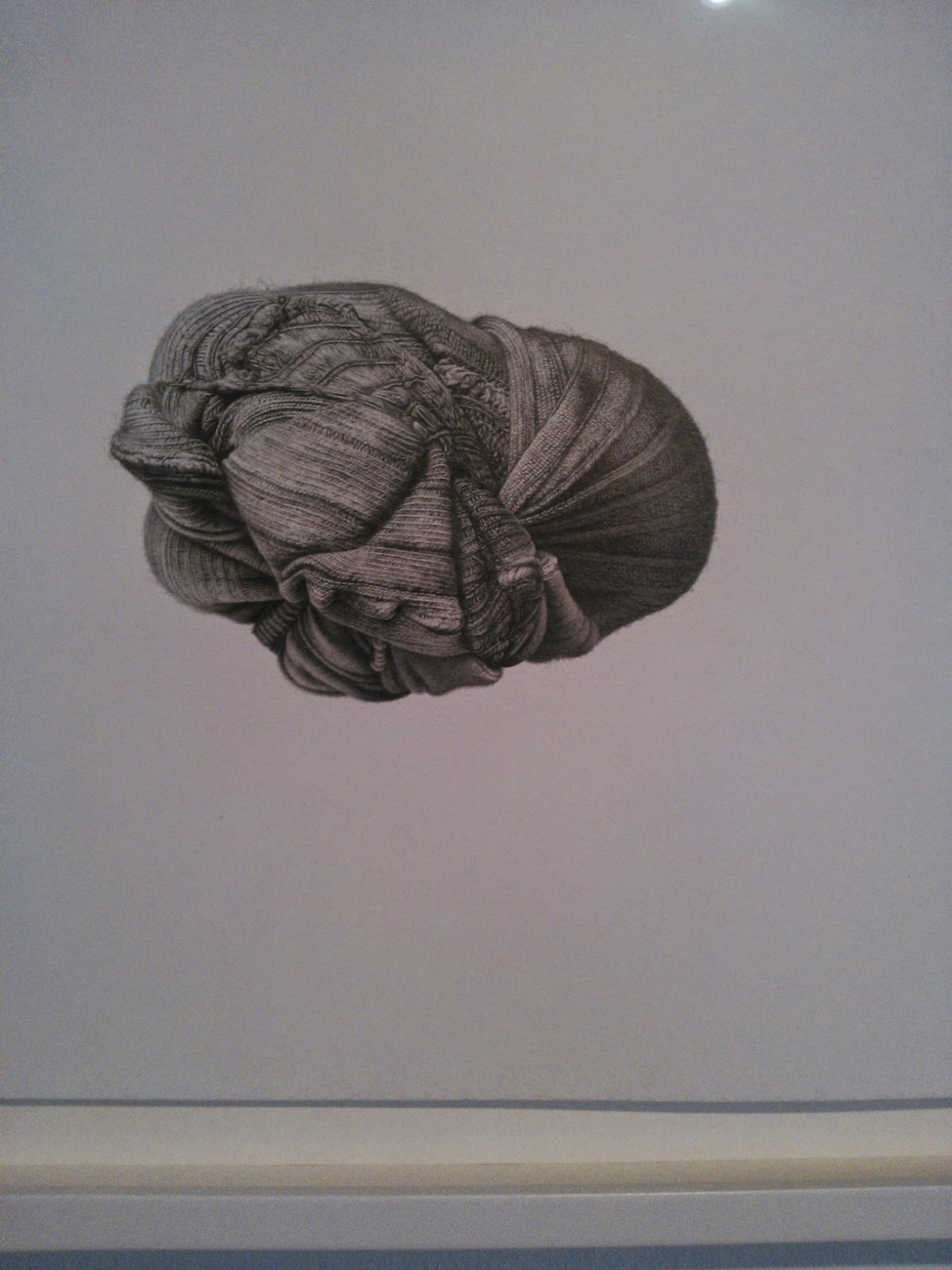