Easily a contender for the most atmospheric location for any gallery in London, the Vaults Gallery, SE1, can be found through the graffiti-laden tunnel on Leake Street, where a range of 'street art' from the sublime to the ridiculous forms something of a pathway to the gallery. It really does not get more urban than this intriguing setting, where Charlie Tuesday Gates (with a name ready for a gothic novel) employs the elements of shock, surprise and occasional disgust for this taxidermy show, her first since 'retirement'.

There is no doubt that taxidermy is making its way back into mainstream fashions, but the viewer can certainly see the reasoning behind the "fantasy underworld where beauty and death collide with nostalgia and borderline insanity". (I wish I wrote that line!) Linking beauty and death is a bittersweet notion that has developed in both media (film, television etc.) and reality for a long time, most predominantly at the moment with the idolisation of celebrities dying young.

Some of the first pieces the viewer encounters as we enter the exhibition are the most disturbing, however the initial shock factor allows us to contextualise Gates' work and understand her ideas and objectives. One media form I was not expecting to see within 'Museum House of Death' was video art, but in the centre of The Vaults, the viewer is treated to three pieces on loop, aided by headphones suspended from the ceiling. 'Born Free' and 'One Night in Peckham' are two of note; the latter of which sees the artist using a skinned fox as a puppet, as it sings a song about being found by Gates: "I was hit on the leg, had a cyst on my head". This paints a gruesome image whilst reminding us that no animals are killed for the artist's work - they were either found or remainders of food production. A terrifying example is the piece that confronts the viewer instantly as they enter the room: 'Keep Away from Idiots!', pictured below. The combination of the fox, a notorious pest in an urban environment, and a wild nest resting on its head highlights not only the declining element of the aesthetic in contemporary art, but the consistently problematic relationship between animals and humans. The location of the gallery only emphasises this further, as it is easy to imagine that stray animals frequent the area. Is their right to roam equal to ours? 'Keep Away from Idiots!' by Charlie Tuesday Gates
Image courtesy of www.charlietuesdaygates.co.uk

Also on display as part of 'The Museum House of Death' is the 'Mind Like Magpie' fashion line, which is also a project of Gates'. Here she designs and creates couture pieces which integrate her taxidermy practice to form a separate strand of work. With a strong ongoing nature theme, which is somewhat unavoidable in taxidermy, the pieces are eccentric yet stylish. Some are more outlandish and others are more wearable, but the artist's message is strong and distinctive, as the exhibition proves.

Examining the human relationships with and perceptions of animals is an enlightening process for the artist to offer the viewer. Gates' next taxidermy sculpture, 'Migraine' is a wonderful representation of how the thoughts and feelings of mankind can be channeled through and relate to the wildlife that surrounds us. This idea is somewhat spoiled by the fact that the removal of the finch's head has been done very swiftly so as to look neat, however the point is still valid. With a map of the United Kingdom in the background of the casing, Gates shows how modern life turns us into a headless, brainless animal, which is where the contrast of using a finch becomes poetic, as we contrast our own lifestyle with the freedom of a bird. 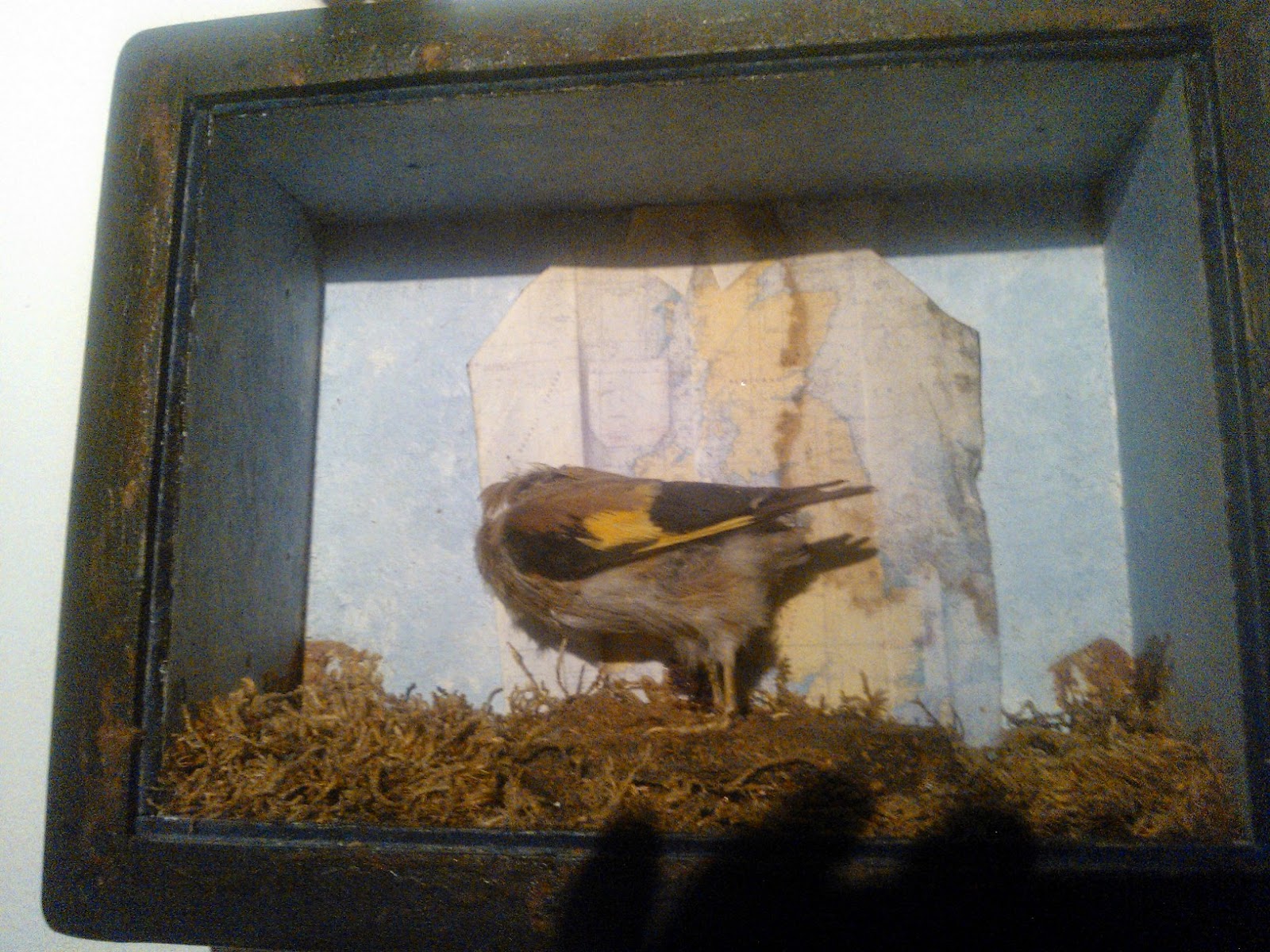 Gates' ability to fuse various media, including fashion, with taxidermy allows a wider understanding and appeal to her cause. The 'Black Beyoncé Cape and Bodice' provides a strange parallel, as the spectacle of the outfit, commissioned for Beyoncé herself, is extremely flamboyant, however the fact that they are made from bird feathers shows us that nature is not only equal to man, but it helps us flourish. Though the artist says that her work looks closely at childhood and nostalgia, the multiple connections we find which link ourselves to the animal kingdom offer an outspoken, political twist to Gates' work. Viewers will be unable to ignore some of the more unusual media of choice, in particular 'Pussy Cat', which provokes both repulsion and confusion as it appears to be a flattened roadkill cat, with the addition by the artist of a "found vagina".  Through pieces like this, we see that art can be identified in both life and death, beauty and vulgarity; it is the message which shines through most potently.