Swiss artist, Alexander Buhler, is currently exhibiting at Studio 1.1 Gallery, E2, which already possesses something of an eerie atmosphere to it, but the artist's work "of the almost not-there" is subtly manipulative and provocative, despite at times requiring consideration in order to decipher what we can see. As the viewer attempts to make social connections with Buhler's paintings, considering that the collection consists of "a limited edition book of drawings" by the artist, we realise that we are in fact provided with an insight into the inner workings of the artist's cognitive state, reflecting the work of art therapy.

Rather unhelpfully, not a single piece in 'Archetypes and Lines' is cited, so I will have to include individual images with my discussion of them. Generally, the gallery is split over two floors, however within each floor the paintings and drawings have been divided by the gallery walls around them, which have been painted different colours (lilac, yellow, pink and white) which appear to be taxonomising the works, but it is certainly not clear what categories these are. This sort of secrecy with the lack of individual details and seemingly random thematic ideas allows Buhler to ensure his ownership over these intimate works, also showing how personal the exhibition is to him and how it should be revered as such. 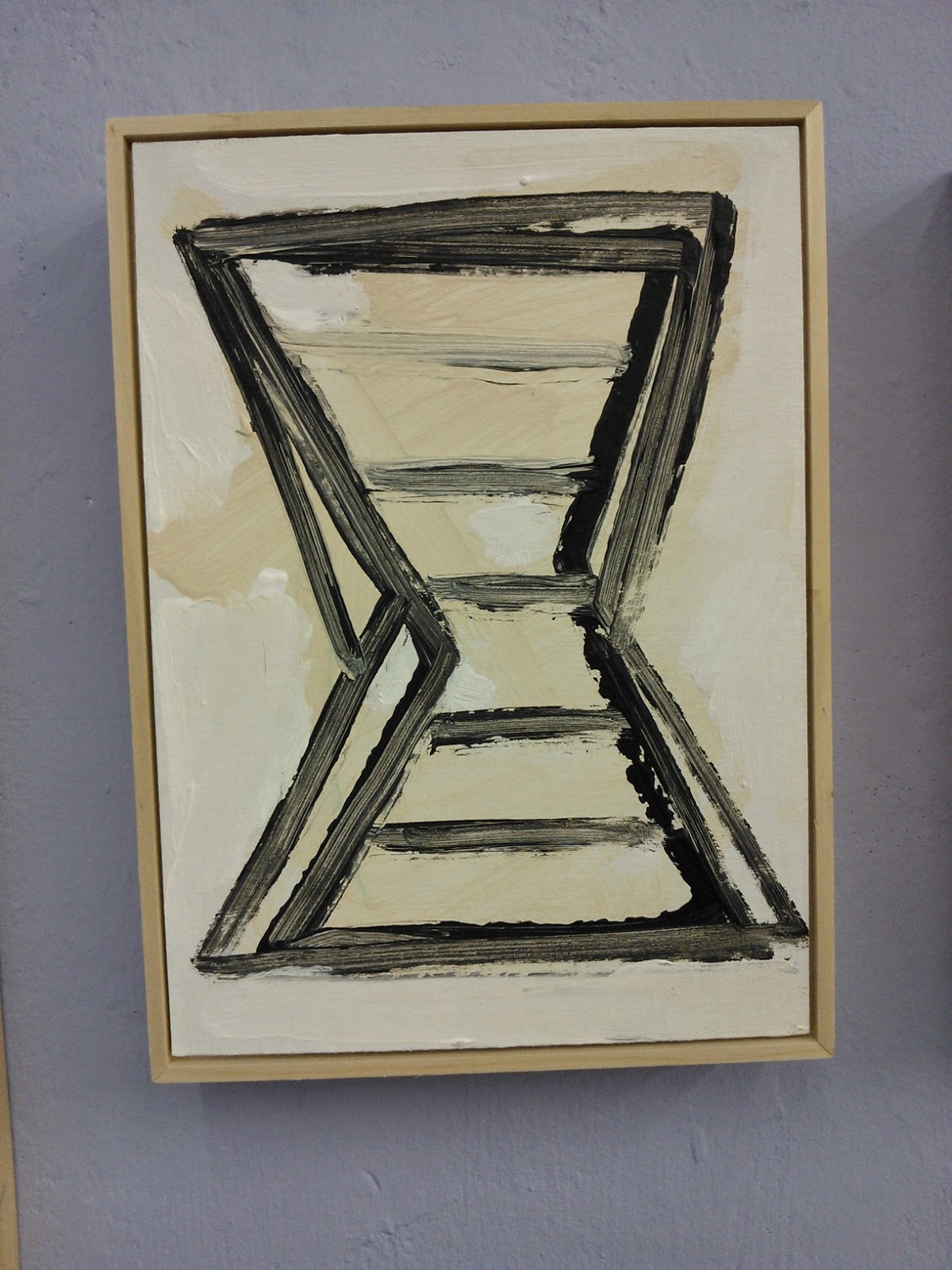 The first image I will reflect on, pictured above, visually conveys misshapen time. Imagery of the hourglass always forces the viewer to make a connection with time, as I witnessed in my review of Maddox Arts' exhibition, which is still running and can be read here. The irregularity of the lines and the way in which they stray beyond the solid shape of the hourglass is telling in that it is not always appropriate to measure or regard time as a linear progression. Instead, the piece gives a message of regarding time autonomously and in a sacred fashion, as there are infinite possibilities to what can happen within any space of time. 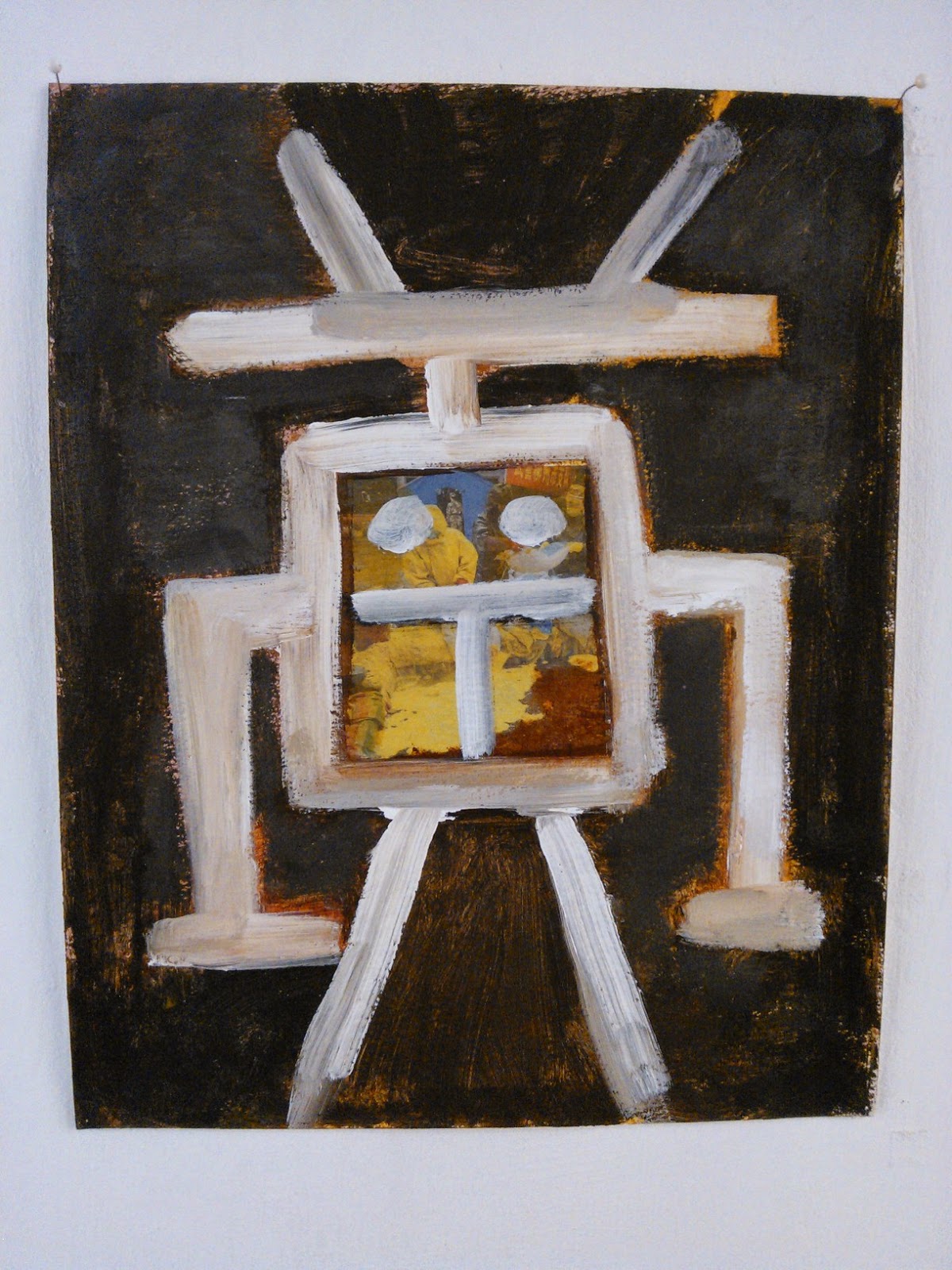 Perhaps the most intriguing piece of the exhibition is that which is pictured above (apologies again for being unable to name each painting). Its ambiguous line work allows the viewer to form various shapes, almost like a piece of flat-pack furniture; consequently it could be considered something of an optical illusion. Upon closer inspection, it becomes evident that the central image within the canvas is that of a food factory, which is certainly alarming considering the temperate nature of Buhler's other paintings. Although we can see some social questions and retorts in the artist's work, none quite provokes the viewer's thought process quite like this painting. Adopting the shape of a television screen, the figure, cleverly personified with leg and arm shapes, directs the viewer to face the reality of mass production, lest we forget that food is most definitely a part of this. Buhler's satire on both technology and consequent mass production is a topic that is wholly unavoidable in contemporary art, and must be addressed.

Human impact plays a large part in 'Archetypes and Lines', and the picture below shows how mankind struggle against both themselves and others in order to achieve. Something that makes Buhler's work interesting is, as I have already mentioned, the slight optical illusion in that, in the case of this painting, initially it seems that the figure on the right hand side is using a launch pad. Yet, the curved arm shape, two legs and a round head suggests that the second figure is in fact another person, thus showing how we flippantly ignore and climb over others to appease ourselves. 'Archetypes and Lines' is a low-key exhibition, where the viewer is able to feel distance and intimacy in equal measure, as a certain level of interrogation is required. 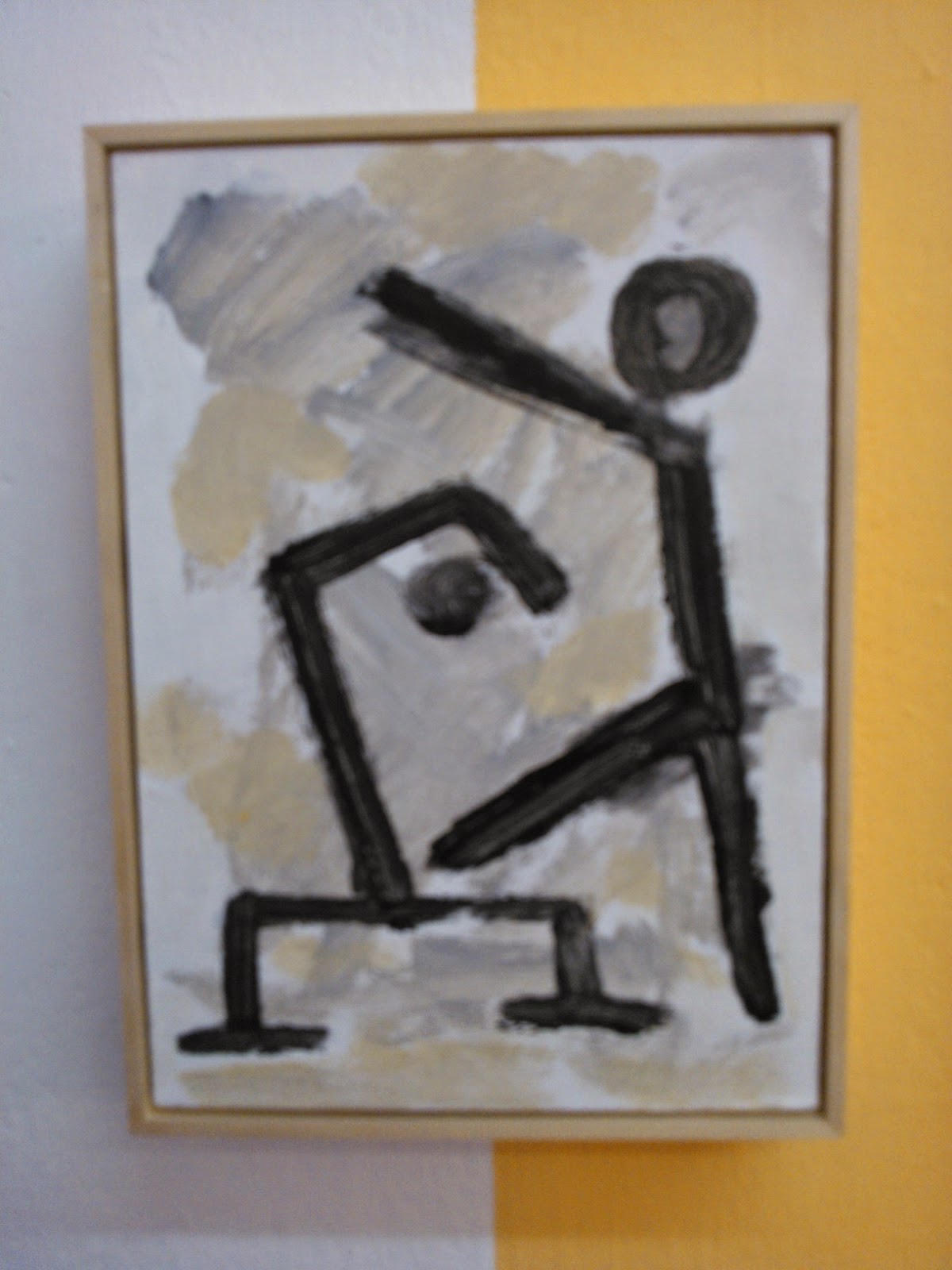