Observing the somewhat sinister satire of German artist, Juliane Hundertmark's work, it is important to consider the artist's individual ideas and values on a wider scale, which in this case is Hundertmark's passion for animal rights. The consistency of the artist's subject matter and style allows the viewer at the Knight Webb Gallery, SW9, to develop a narrative concerning the binary of the closeness and distance between mankind and animals.

'Abendmahl', pictured below, which translated as 'Communion' in German, is a fine introductory image with which to begin exploring the exhibition. The painting is encompassing as each character within the image forms a chillingly direct eye contact with the viewer. Aware that you are being regarded, it becomes impossible to refrain from analysing every figure carefully, as it is soon evident that the painting is a menagerie of eccentric, and at times undecipherable, characters. Perhaps most terrifyingly, the phallic-shaped translucent white body at the front of the painting smiles at the viewer, wearing a charming expression. This mirrors the model of fear used with the figure of the clown, using a jovial facade to accentuate a crescendo of potential evil. 'Communion' as a title adds further mystery to the image, as we are reminded of the Last Supper, which again implies impending tragedy. 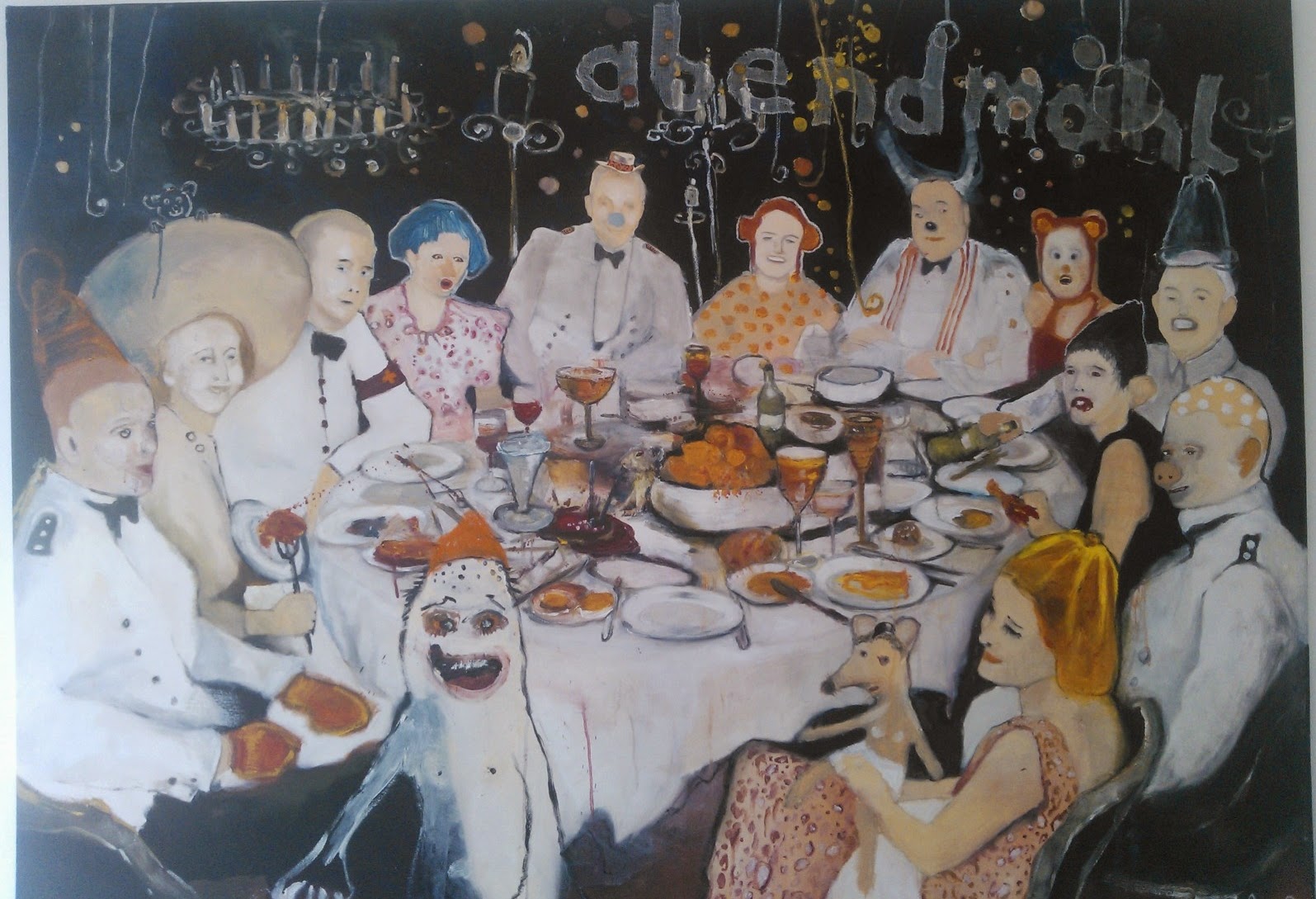 Another startling image is 'Lost', where we see less of the hybrid humans that are indicated in 'Abendmahl'. Instead, Hundertmark has utilised the idea of personified animals. While the figures are clearly not specific animals, they possess a wild quality which, paired with the foliage background, creates a fantastical yet ambiguous and open environment for the thought processes of the viewer. The range of facial expressions found on the characters is alarming, as we are left bewildered but still intrigued, as we see delirium, fear and indifference respectively on the faces of the primary figures.

As distracting and mystifying as the mythical scenarios of Hundertmark's paintings are, the artist has succeeded in that they do not overshadow the roots of the artworks; in fact, her scenes are so eccentric and confusing to the eye that the viewer leaves the exhibition still inquisitive as to what intense message could provoke such bizarre visual compositions. 'Together', pictured below, is a fine example of this, as we are able to explore the artist's affinity with the animal activism cause. The dysfunctional, and certainly uncomfortable, appearance of the animals questions the relationship and ethics between humans and animals. Again it is the disconcerting expressions on the faces of the animals and their interrelations which heighten the attention of the viewer and use fear as a catalyst for further analysis. 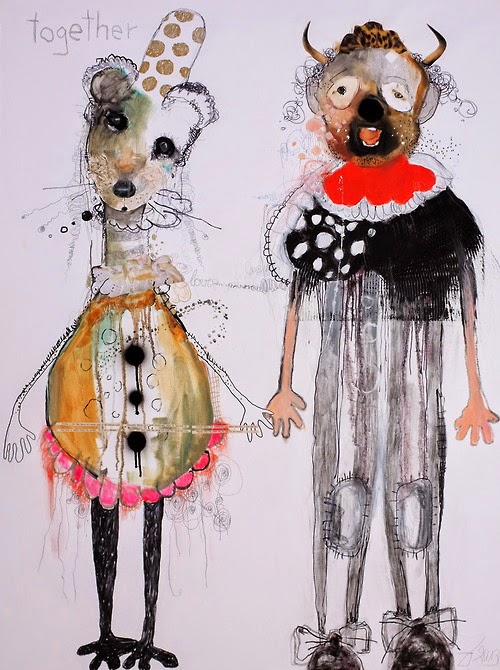 'Together' by Juliane Hundertmark
Image courtesy of www.knightwebbgallery.tumblr.com

In highlighting the obscurity of these relationships, Hundertmark's presentation "could be classified as an explicit form of self-portrait", according to the Knight Webb Gallery press release. Considering this aspect of the artist's work, although it seems to be an effective contemporary technique in self expression, assessing where the individual comes into play adds another degree of ambiguity to the paintings. How much of ourselves and our own behavioural traits can we see in 'Strange Animals'? It is clear that the artist wishes to illuminate comparisons and overlaps in animal and human behaviour, suggesting one's acceptance, or lack thereof, of the other and highlighting her social values with viewers of her work.