Update: Display Gallery is no longer functioning as a gallery space. However, The Koppel Project Hive has taken its place at its address on High Holborn.

Despite the gallery's confession that its latest exhibition title was "culled from a search result", 'Need You 100%' provides an insight into both contemporary artists' reliance on technology and the debate surrounding this. Although the internet and various social media have proven to be a huge advantage in generating interest for artists' practices, there is always an opposing view, in that we now find ourselves overexposed to images and as a result have become almost immune to experiencing authentic, original art. As a fairly newly established gallery, Display, EC1, promotes the work of their featured artists by selling works online; clearly there is some balance in the debate over internet use in the contemporary art world.

One joy of 'post-internet' art is the role the viewer must take in stripping back ideas of the movement to analyse the artist's ideas on the reality of the contemporary age. The first piece that caught my attention on this basis was Sara Naim's 'Interrupted Blood Cells', pictured below, a screen print on archival paper which strongly resembles the 'buffering' of outdated television sets. With its revealing title, the piece suggests that the rhythm of our lives has become synchronised with the pace of various forms of media and technology and subsequently highlights our dependence on these platforms, as they have something of a dominance over our lifestyles: a somewhat terrifying thought. 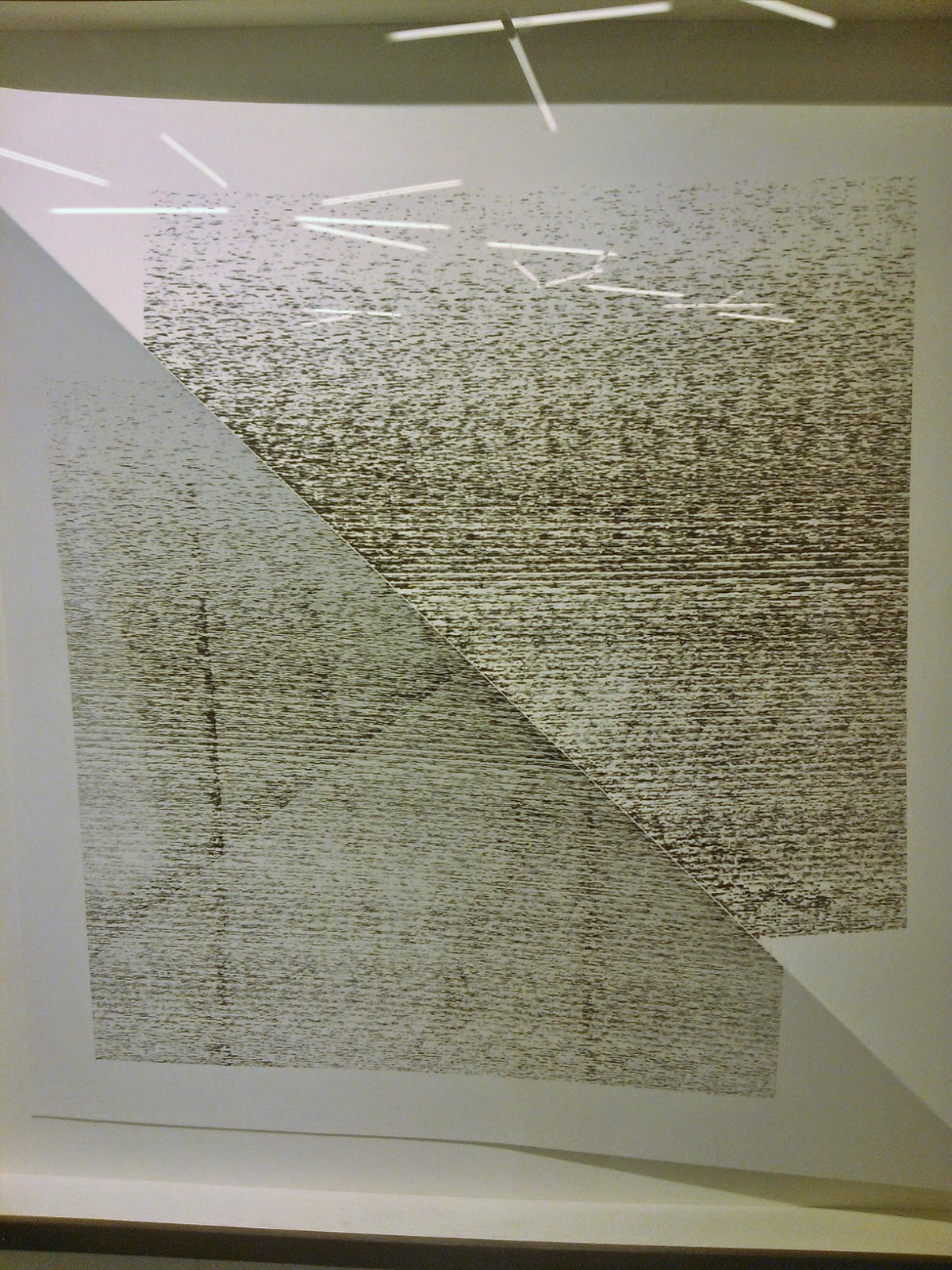 The exhibition is split over two levels: the first floor and basement.While the first floor embraces and retains the spaciousness and air of the Holborn Viaduct, for me the real magic and potential of 'Need You 100%' is fulfilled in the basement, where due to the video installations and low lighting that is required for their display, we find it is much more atmospheric and specific pieces are illuminated. However before I reach the work found in the basement, I will briefly discuss the intriguing oil paintings supported by glass by London based artist, Konrad Wyrebek, titled 'Hate or Glory'. Its title alone provokes intense questioning, especially given the fortunate position of contemporary artists to express their own political views and stances. Split into two separate panels, Wyrebek's piece displays two identical glass panels which seem to protect the two canvases beneath them. It is likely that the artist is using the likeness of the two segments of 'Hate or Glory' to suggest the lack of true victory in war and conflict. As the left panel is only minutely different to the right, in being darker and somewhat foreboding, we see a pictorial representation of exactly how similar victory and loss is in conflict scenarios.

So we finally enter the basement! The dim lighting accompanied by the movement of the video pieces really change the atmosphere and the way in which the viewer is able to perceive the works in the basement. One of the first pieces that attracted my attention was the second of Derek Mainella's 'Untitled (Sliced Grid)' canvases, one of which is pictured below. Using the generic, universal design of the checkerboard to entice viewers, the artist hints at the iconoclasm which contemporary artists strive for by slashing the canvas repeatedly (which ironically has been done in a rather neat way). In the postmodern age, it often seems like a battle to overthrow the narrow traditions which have dominated the art world for many centuries, and in this piece the viewer is provided with a taste of what can be achieved, or even merely regarded, once the primary layer is stripped back. Mainella shows us the soft yet strong colours, perhaps representing the potential that is waiting to erupt with the right fusion of talent within the art world. 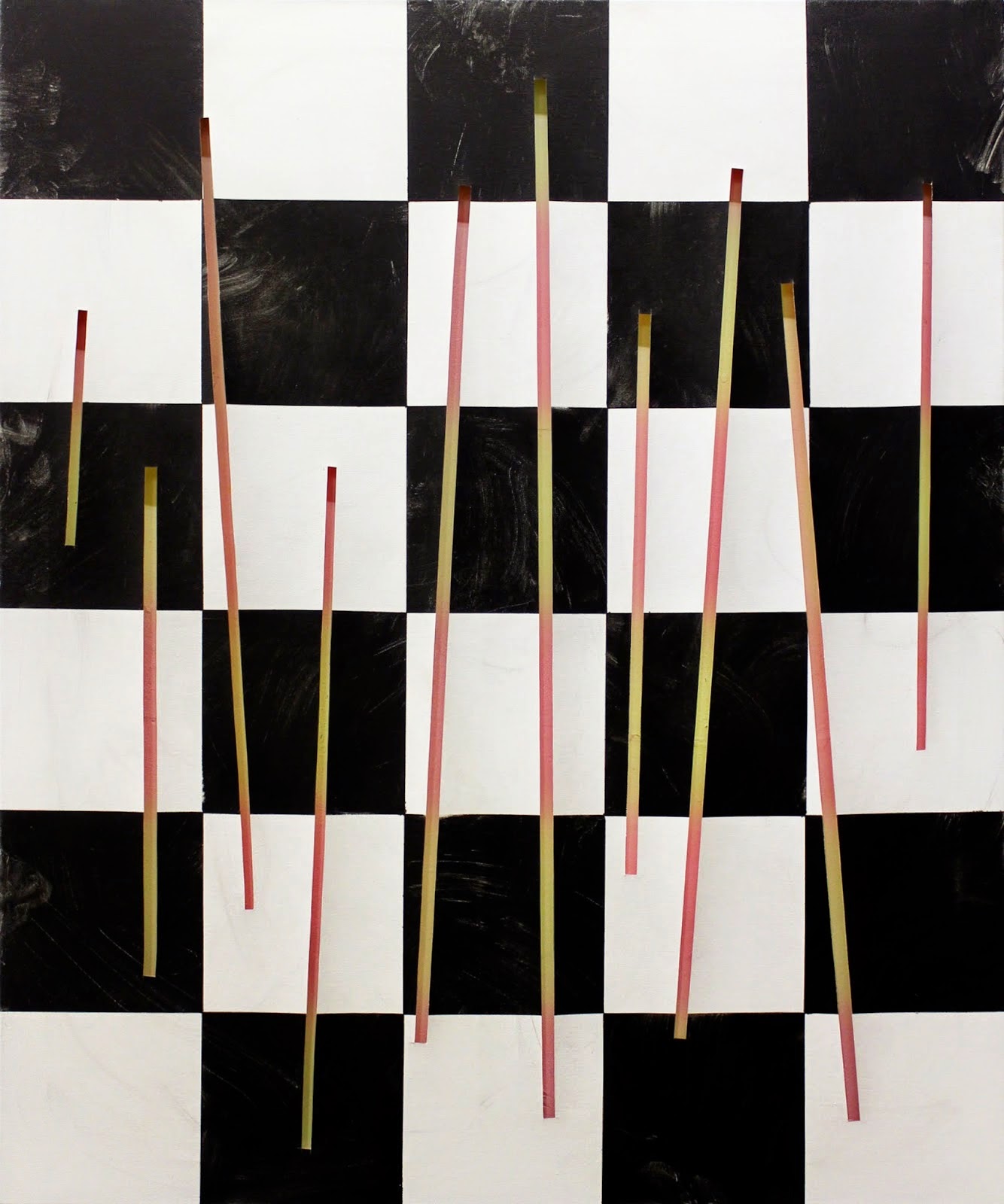 Mainella's piece shows us that there is certainly more to this 'post-internet' movement than satire on technology and use of the internet as a wider platform. However these ideas have also been embraced in the exhibition, as Oliver Hickmet's video piece, 'A Foreboding Sense of Happiness', plays with such ideas. In the artist's statement as part of the exhibition's press release, it is said of his art that "reality and artifice are explored in a play of imagery and surface that question the appearance of things". This certainly is the case in Hickmet's work, as the viewer witnesses a rotation of idealised video clips, including a sunset, waterfalls and a beach. Each moving image depicts a small sense of freedom and tranquility before it moves on to the next scene. The viewer cannot help but make connections with the fast-paced, disposable culture in which we now live. Constantly skipping songs on an iPod, the influx of uploaded photographs on instagram... I need not go on. Hickmet's choice to illuminate an 'Impending Happiness' in the film's title shows how much of a progressive people the 'post-internet' generation are. With drastically reduced job and financial prospects than those of our parents, we now find ourselves blindly living and thriving for the impossible dream of a utopian future. With this in mind, the constant movement of the video reminds us how fast our lifestyles are developing, albeit towards a highly ambiguous conclusion.

From what I have seen at 'Need You 100%', an artist that strikes me as paving his way through the difficult movement of 'post-internet' is Pascal Rousson, who uses multiple disciplines in his work and currently has several pieces at the Display Gallery. His work is somewhat reminiscent of Barbara Kruger and also bears some similarities to Tala Madani, in that he uses large, explanatory text accompanied by recognisable painting work, which in turn basically depicts the text. (This will make much more sense if you check out his portfolio, some of which can be found by clicking here) It is highly refreshing to see a playful nature retained in contemporary art, where often market value can dominate other priorities. For those unsure of the post-internet movement, I would advise doing a small amount of research before visiting the Display Gallery's latest exhibition, as at times the pieces can be overwhelming, or even underwhelming, without the context of the artist and movement's ideas.