Anise Gallery: Drawing on Architecture (until 25th May 2014)

In celebration of the Society of Architectural Illustration's book of the same name, the Anise Gallery, SE1, has compiled a collection of some members' work to fill the gallery space and bring architectural sketches to life. Its press release boasts that the viewer is able to "fully engage with these magnificent art works while absorbing the multitude of talent that has given the Society of Architectural Illustration its prestigious place in history" and this is certainly true, especially for those who have rich memories of urban landscapes.

Considering each piece on display, it is interesting how the artist has taken an individual stance on the architectural and wider ideas of each location. This can be seen clearly in Philip Bannister's 'Borough Market' scene, pictured below, where despite the focus on the busy environment, expressing the diversity of central London, the perspective of the image looking upward conveys a feeling of a progression that cannot be halted. This is an idea that connects the London of 2014 with the beginning of the Industrial Revolution. A lack of intricate detail within the constant stream of people allows the wonder of the landmark's architecture and its spirit to be celebrated; regardless of who the people are, the structure will remain the same and retain its character. 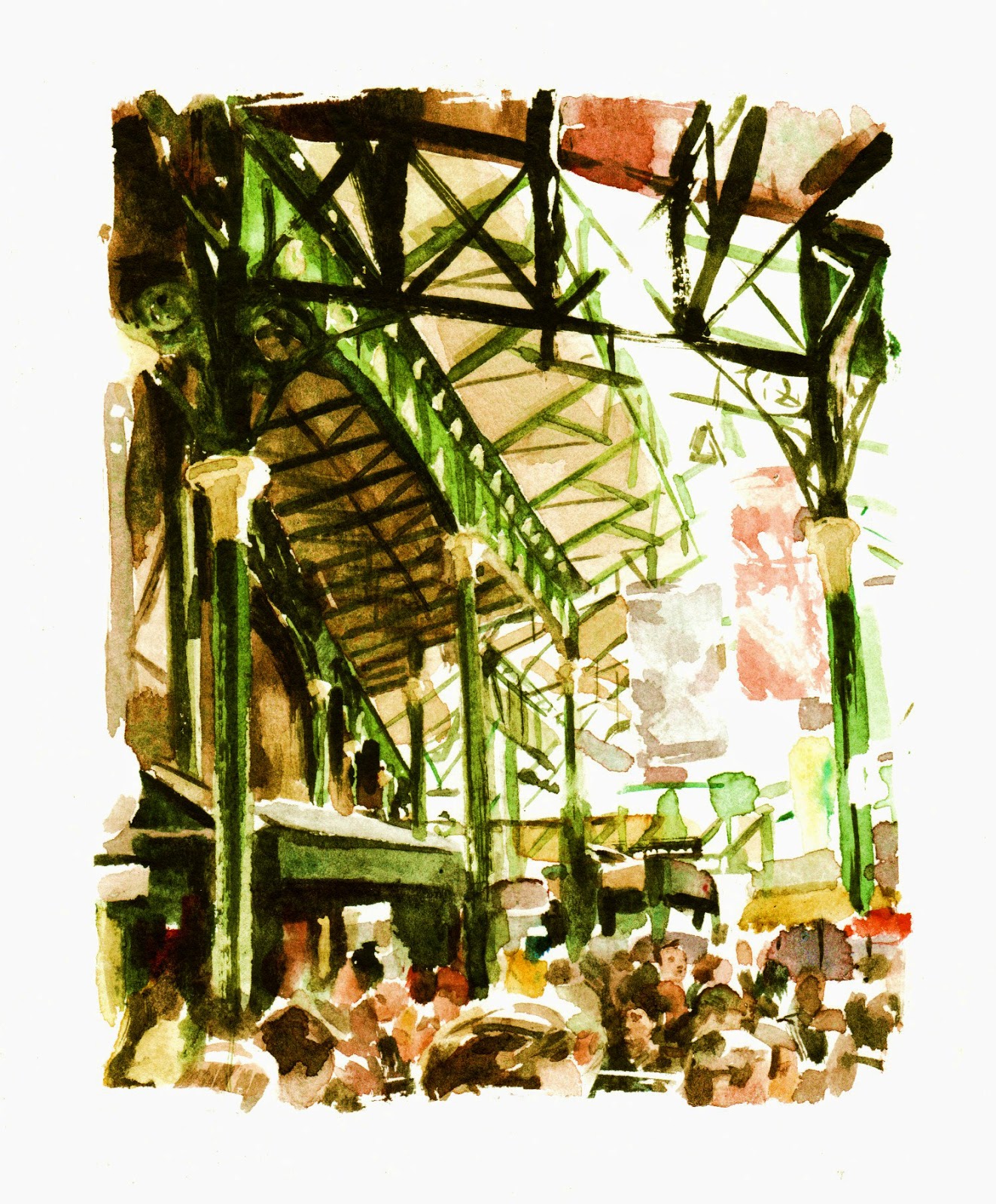 To those who are unaware of Borough Market, it is a firm favourite in London for tourists and locals alike and is always abuzz with people. Although the figures in Bannister's painting are mere afterthoughts in the composition, they still have a presence which cannot be denied and does in fact add to the ambiance of Borough Market in reality. The way in which 'Drawing on Architecture' has been curated is silently beautiful, as pieces are lined along the wall so that the viewer feels as if they are taking a walk through the different landscapes, some of which will be familiar, others less so. In addition to this wall space, there is a glass division panel with three more canvases displayed each side, which for me really resonates with the diversity that is being shown in the exhibition, varying from traditional designs such as those expressed in Alena Newton's 'Detail of Ionic Capital Bath' to more progressive ideas like Zara Ashby's 'Tower Competition with Philip Gumuchdjian'.

'Tower Competition...', pictured below, is a visually stunning image that shows what seems to be a contemporary residential space. Having researched Gumuchdjian Architects, I have found this to be a correct assumption, yet the building has been placed under the 'commercial' classification, which of course highlights the problematic nature of London's soaring house prices. The work of Gumuchdjian Architects is extraordinary, and the knowledge that the 'City Tower' already sits in London's landscape really makes the viewer feel that the future is now.

While 'Drawing on Architecture' is by definition an art exhibition, it seems important to treat works found at the Anise Gallery as documents of architecture as opposed to, or in addition to, works of art. I found this to be prevalent as I regarded 'London 2012 Village and Basketball Arena' by Matthew Wright, where the unique design of the basketball arena lies against the view of the Olympic village. From an artistic perspective, it is easy to say that the image does not capture the spirit and true joy that the Olympics brought to London. However in the view of appreciating and observing innovative forms of architecture, the image does provide a suitable narrative for the games, as we see how the progressive nature of the purpose-built architecture reflects the social progressiveness of London 2012, partly in that the spectators felt like a community, regardless of nationality, race, (dis)ability etc.

As I mentioned with the crossover between art and documenting these architectural works, Danny Meyer's 'Mondriaan' piece reflects several contemporary buildings I have seen which borrow their design from Piet Mondrian's early twentieth century artworks. This exciting link asks the viewer to think about the wider context of vernacular architecture, in that we must see how our surroundings adhere to the society in which we live. The profound impact which the likes of Mondrian have had in the progression of twentieth century art cannot be underestimated; showing this through both public and domestic buildings used shows this effectively. 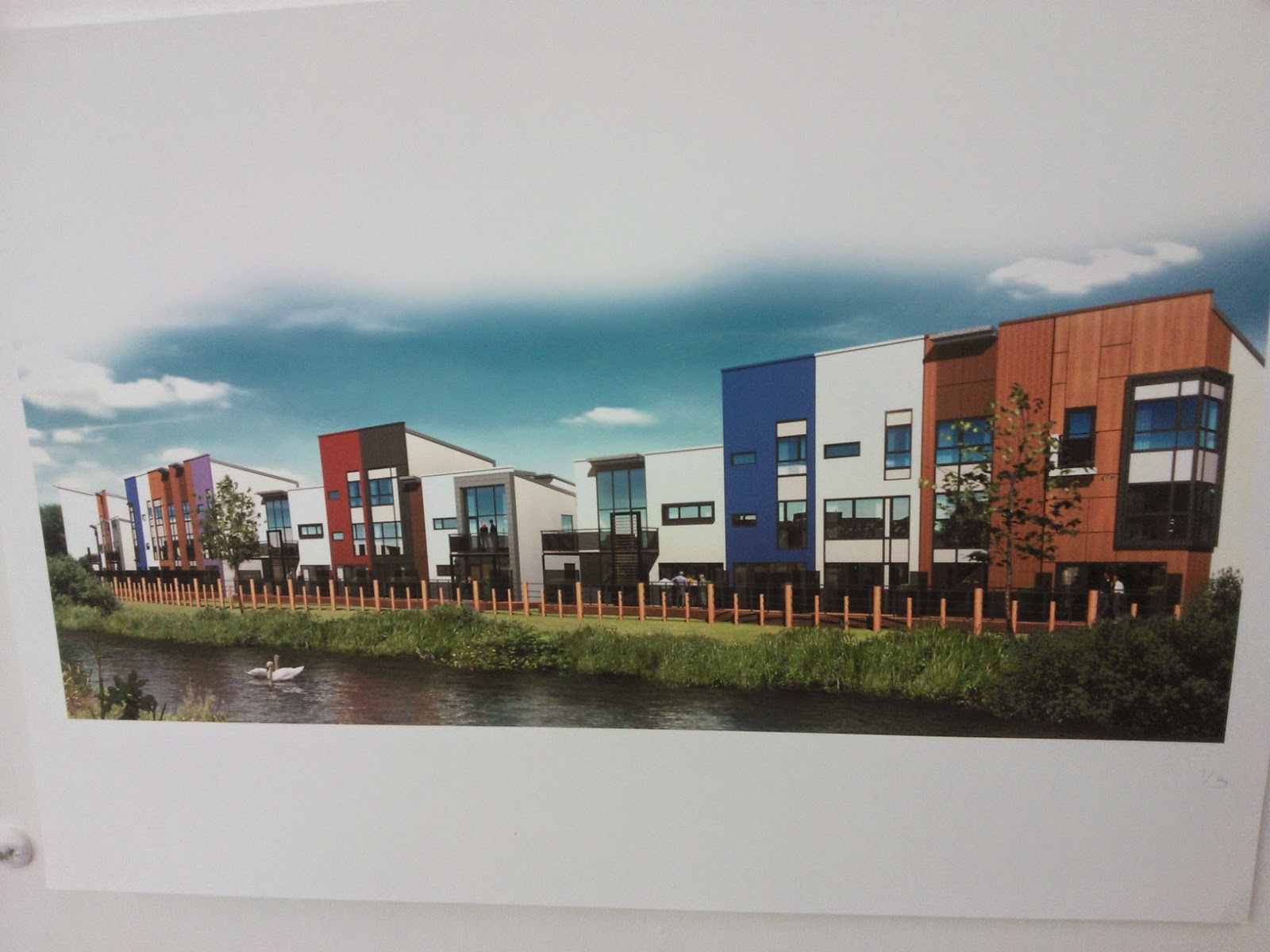 Although with this blog I tend to only include exhibitions I have enjoyed, 'Drawing on Architecture' has interested me and awoken my ideas to a degree that I have not experienced for some time. Its tranquil atmosphere within the gallery paired with the diversity and passion we see in the drawings, paintings and photographs on display make this an exhibition that really should not be missed.