Iranian-born American artist, Tala Madani, is currently exhibiting her third exhibition with Pilar Corrias Gallery, W1, rather controversially titled 'Abstract Pussy'. An extremely contemporary-friendly title, it connotes a crude phrase for a vagina, suggesting an artist with a feminist theory-based practice, which is a strong interest of mine on a personal level. In the contemporary age, it is popular for sexuality and its troublesome construct to be depicted using the unadulterated representation of genitals conveyed in different ways, depending on the message of the artist. 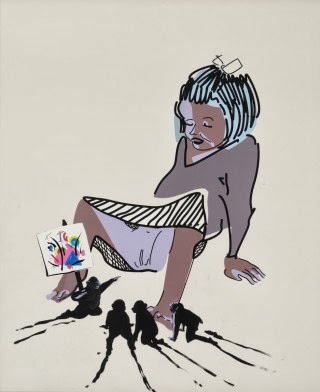 
The gallery space houses a small collection of Madani's pieces, charting the artist's response to the theme. Firstly as the viewer enters the gallery, we are presented with 'Decorated', an oil painting depicting an old, wilting brown tree. Initially this seems irrelevant to the rest of the exhibition, however upon reflection and contemplation it appears that Madani is showing the need for artificiality in women in order to impress men. However naive or controversial this may seem, the recurring theme of the objectified woman is something that the artist clearly feels strongly about, thus creating an image that demands the viewer's deep attention and reflection. As a viewer, this seems an intelligent curatorial decision by the gallery.

As something of a motif to the exhibition, we are introduced almost immediately to the artist's middle aged male characters, who appear in a large proportion of the 'Abstract Pussy' collection. There is consistently a collective of these characters in the paintings; the idea seems to be that they are small in isolation, but they can be potent in numbers with their meticulous, persistent and menacing antics. '3D Glasses' presents these men for the first time, but not in full human form. Instead they are extending white blobs, wearing glasses as the title implies. The artist has included black strokes on the painting to represent facial hair; consequently the viewer is in no doubt of Madani's eventual damning portrayal and evident cynicism of the male attitude towards women's sexuality. In my perception, it could be inferred that the image is expressing the schism between the expectation of women that men hold, primarily due to films and pornography, and the consequent bewilderment when these men realise that women are not as inert as they would expect.

Many of the ideas planted in '3D glasses' are reflected throughout the exhibition's pieces, such as 'Searchlight', an image neighbouring the previous image bar one. A solemn painting, here the artist shifts focus to the potential vulnerability of men. In addition to the pressure that is put on female sexuality, there is the similar force determining what is 'natural' or 'normal' concerning the male sex drive, which can leave some men feeling isolated and distressed. Of course, as with all archetypes and clichés, it is a completely false and misguided sentiment, and 'Searchlight' is a sensitive work that does provide a slight break from the rest of the exhibition, in that the viewer is presented with an intensely dark image, thus drawing particular attention to the light that is illuminating the subject's groin area. This could represent 'penis envy' or perhaps the aforementioned lack of sexual desire which can plague some men and women on an equal level. 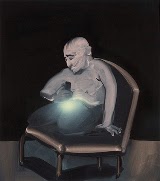 So now we arrive at the two grand, core paintings of the exhibit: 'Abstract Pussy', which is the first image of this blog post, and '3D Pussy', an altered version, pictured below. The first is abundant with colour and allusion, showing a subdued female, who in fact looks hauntingly young, being invasively explored, by several of the small male figures that we have become accustomed to in Madani's work. With the current issue of 'slut-shaming' and varying (and largely hypocritical) attitudes regarding male and female sexuality, it is interesting to see how the artist has conveyed the female, who is symbolically huge in relation to the tiny male characters, as submissive and shy, which is a thoroughly thought-provoking marriage of imagery. Despite the pose of the girl, which some will infer as submissive or coy, there is nothing arousing or sexually charged about 'Abstract Pussy', in order for viewer emphasis to be placed primarily on the actions of the small men. 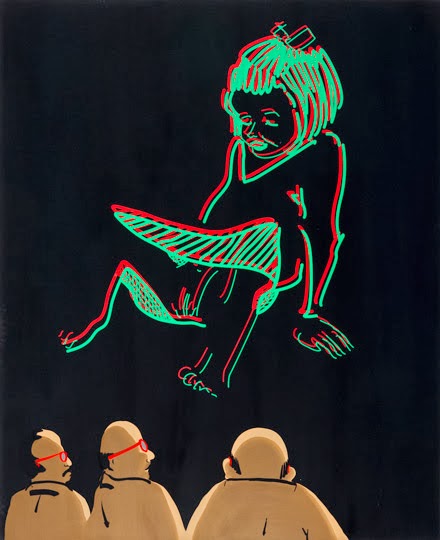 It is with this that we can now contemplate '3D Pussy', a version of 'Abstract Pussy' which includes imagery that resonates with that which can be found in the Red Light District. Whereas the original is both intrusive and confusing, this image presents a more realistic appearance of the men that have been consistently depicted; their voyeuristic stance external to the image makes this a more sinister viewing experience than the previous. In keeping with this amalgamation of the sinister and the comical (in the form of cartoons), perhaps in order for one to desensitise the viewer to the other, we find 'Luminaries', an incredibly enticing image. Unfortunately the photograph of the painting that I managed to take does not reveal the fullness of the image, therefore I recommend a visit to the Pilar Corrias Gallery for yourself to embrace it. Although significantly smaller than both 'Abstract Pussy' and '3D Pussy', the artist uses the power of light in a similar sense to 'Searchlight' insofar that the image presents a tree which holds several small male characters, in keeping with the exhibition motif. Again these men are tiny in size, and they are mounted on the tree in positions that are both sexualised and childlike, concluding Madani's extended parody on the immature generalisation of views on sexuality, with a focus on those expressed by men.