Halcyon Gallery: Dale Chihuly 'Beyond the Object' (until 5th April 2014)

Any visitors to London's Bond/Regent Street area (stretching from Marble Arch to Soho) will be in absolute awe if they are into their art. From the grand Wallace Collection to the Elena Shchukina Gallery (which I reviewed here) an established but tiny gallery along the backstreets of Hyde Park, there is more to see in this small area than there are in some whole cities in the UK. With this in mind, I spent this beautiful day here, finding myself drawn to the Halcyon Gallery's, W1, latest exhibition by renowned American glass sculptor, Dale Chihuly. As opposed to the grandiose, physical domination of the works that tempt the viewer in from New Bond Street, the title of the exhibition is what attracted me primarily, as with such elaborate designs, it intrigues me to see the artist's ideas beyond the purely visual aspect of his work.

As I have already referred to them, perhaps it would be logical to begin with the two monumental glass sculptures placed in the window of the gallery, reminding the viewer of either a Liberty or Selfridges Christmas display, as passers by were evidently captivated by the installation. 'Citron Chandelier with Lime Green Fiori', which has incidentally been exhibited at the entrance of the Victoria & Albert Museum, has a presence which is largely condescending and almost frightening to the viewer, due to the contradiction of its huge size and delicate structure. Spanning from the ceiling, draping to the floor, the word 'Chandelier' in the sculpture's title is used comically to emphasise the sculpture's size in comparison. The artist's use of greens and yellows are a nod to a vibrant natural state, which is reflected in the chaotic shape and almost intrusion of the viewer's space with its sharp and long parts. 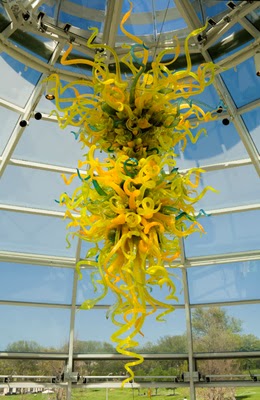 In the layout of 'Beyond the Object', it appears that the majority of the large-scale, statement pieces have been chosen for display on the first floor, leaving space downstairs for paintings and smaller sculptures. The exception to this, however, is the artist's 'Pearl White Persian Installation', a range of white glass sculptures presented in a tank, strongly resembling jellyfish at an aquarium. This is the point at which my understanding of the exhibition title was heightened, as the viewer cannot help but consider that Chihuly has brought glass to life in a way that is so distant from its sterile, traditional uses. While the exhibition has its fair share of utility-style sculptures, such as vases and the so-named 'baskets', 'Pearl White Persian Installation' reminds us of the vivid decorative potential of glass, and almost illiuminates the rest of 'Beyond the Object' as its centrepiece. 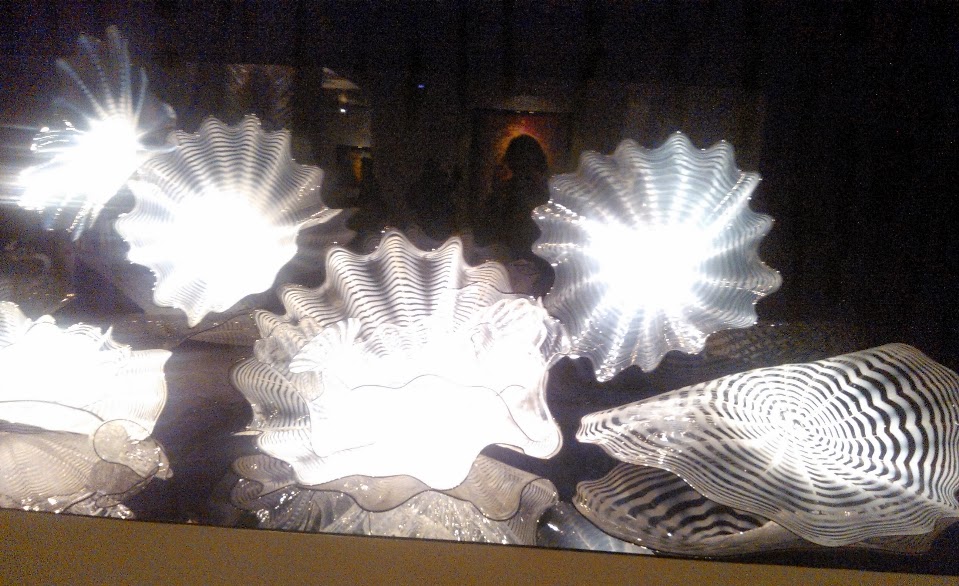 As mentioned, although Chihuly's glass sculptures are what make him a famous and unique contemporary artist, the Halcyon Gallery is also showing some other works, including 'Ireland Drawing', which I will come to. Using a material so widely used as glass, it perhaps is not a surprise that there is a strong geographical heart to some of the artist's work. His personal website cites Venice, Ireland and the amalgamation of his Hungarian, Czech, Norwegian and Swedish roots as influential locations. Despite all this, the first of his 'Ireland Drawing' paintings that are being displayed at this exhibition is puzzling. Showcasing what appears to be an asteroid, I first appreciated in the painting that Chahuly has made a fine effort in disestablishing the tired cliché and associations of Ireland as a country, which are generally prevalent in representations of national art. It therefore cannot be denied that the artist is blending his own experiences and artistic ideas of Ireland into this painting. Again on his website, he has produced a statement about the need to establish rules before breaking them and consequently extending the boundaries. A concept that many contemporary artists will agree with and comprehend, it is intriguing to find the ideas and strategies behind that which we are presented with in the gallery.

In hindsight, 'Beyond the Object' is a more diverse collection of work than is initially expected. With the glass sculptures taking priority as the artist's specialism, the viewer is able to enjoy pieces from additional media. Two images, displayed consecutively, both entitled 'Float Drawing on Acrylic' incorporate themes from the abstract expressionist movement, and in the photograph below, Chahuly has been captured using a painting technique highly similar to that of Jackson Pollock. There is a recurring motif in the artist's work concerning spatial awareness; in these images this seems to have been extended into outer space awareness. Within the canvas, he has formed both circular and unidentifiable shape patterns in order to create the momentum of chaos. His description of his media within the title of some of his works show the significance of how he has used the materials available to their full potential. 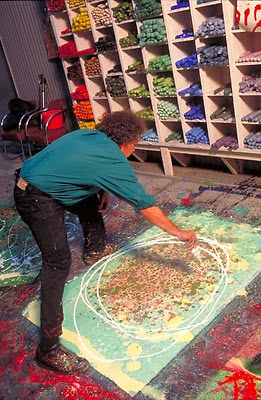 Photograph of Dale Chahuly at work creating one of his 'Float Drawing on Acrylic' paintings
Image courtesy of www.chahuly.com