For my second post from the GX Gallery, SE5,  its latest exhibition comes from an artist called Stephanie Mackenzie; we are informed by the gallery that she is very much emerging and current on the art scene. She is, in fact, so 'up-and-coming' that 'Psychedelic Soul' is her first UK solo exhibition. It is certainly a sound judgment to say that this did surprise me, as her work is fresh yet confident, combining and amalgamating urban and traditional influences, which culminates in an intensely interesting oeuvre.

The first part of the exhibition can be found on the ground floor, where a selected few of the artist's works are displayed, namely several pieces from her Utopia Land Series. This is where Mackenzie presents idealised female figures from history, or at least female protagonist characters with a smooth, classic appearance. From this she has customised them, replacing the delicate features of a period face with a distinctly contemporary one. This is an exciting addition to the painting, and certainly sets the foundations for the rest of the exhibition. I would like to know if the artist has used her own face in these works, as this specific series does seem to feature the same face. If this is the case, she is certainly declaring to the viewer that she is ready to make a lasting impression. Specifically to 'Madame Fourrure', with a literal translation of Fur Lady, the transitional capture of expression on the protagonist's face shows the distinction Mackenzie wishes to make between the state of the kept, ideal woman of a past patriarchy, as stoic, submissive perfection, and the twenty-first century woman. This is a concept that is established throughout the exhibition.

'Madame Fourrure' as part of the 'Utiopia Lands' series by Stephanie Mackenzie
Image courtesy of www.gxgallery.com

So from this, we find 'Mlle La Comtesse de Florence', which is also part of the Utopia Lands series and incidentally is the most expensive piece by the artist in 'Psychedelic Soul'. Measuring in as comparatively large, in relation to both the other paintings and the viewer, the female figure of this piece employs a rigid stance, with a stern gaze and sassy pose. Intriguingly, several features of the woman's body have been drawn in the style of Leonardo, using black and grey pencil-like marks, suggesting values from a time predating 'Madame Fourrure' and highlighting female oppression.

Downstairs, the atmospheric lower floor of the gallery always has the ambience of potential dark and treasured secrets, something that Mackenzie's ambiguous work adheres to and embraces. For conceptual artists, the term 'ambiguous' can be either a given sentiment or a compliment, but it can certainly be applied to the 'Pocket Girl Sherlock Holmes' canvas, where we are provided with many visual elements within one piece. The image appears to be simple, as it includes images that are comprehensible and popular culture-referencing, yet as an ensemble it resembles something of a bold headache, while the viewer attempts to justify how the  As aforementioned, there is a certain vibe in Mackenzie's work that conveys the reality of female subordination and their secondary treatment. Could it be inferred that, appearing on the rear end of a pair of jeans, a woman is a disposable commodity? Then the viewer notices that Sherlock Holmes is also present in the image: perhaps women are a mystery waiting to be solved? This surely is a mixed media piece that requries attention and active ideas. 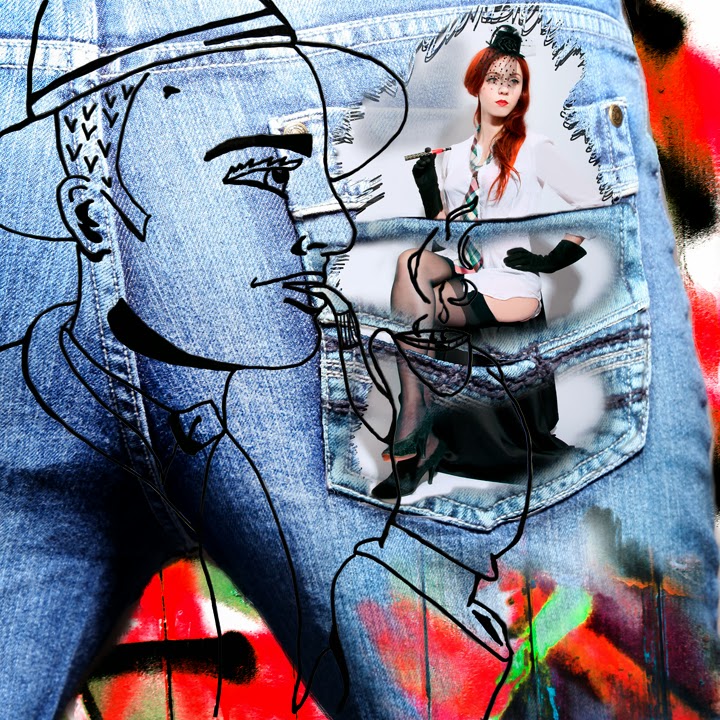 With her status as an emerging artist, there is no biographical detail and/or citation of her influences other than what is evident to the viewer. So in seeking this, I noticed that there is an undeniable inspiration from popular culture, the urban scene and street art, the latter which is clear in the image above. Following on from the artist who epitomised mass culture for the first time, Andy Warhol, Mackenzie has incorporated the image of Marilyn Monroe in her work, alongside the Mona Lisa, which was, of course, first manipulated by Marcel Duchamp. Mackenzie's 'Marilyn Graffiti' series is a visual spectacle due to its Dada-like composition. (As I continue to write about 'Psychedelic Soul' and its components, I notice how diverse her influences really are) The piece is so chaotic that at first glance, the viewer sees everything and nothing at once. Further exploration of the print is required in order to decipher that the image in fact includes the facial features of Marilyn Monroe and multiple Big Bens.

Personally, my favourite image of the entire exhibition is not an obvious choice; it is understated and to me it is an elegant piece with depth. Entitled 'Gate Keeper of Dreams vs Red', the digital manipulation shows a stone figure looking into the distance. The use of stone is a strong and traditional expression of stoicism or heroicism, but it seems that the message of the subordinated woman has resurfaced, if it momentarily left the frame. The addition of the pink lips onto a grey statue accentuates this idea, as does the positioning of the breasts in the centre of the image. As a woman of the twenty-first century, I highly appreciate the sleeve tattoo on the statue's right arm (left to viewer), showing the common design of the Japanese fish scene, as a representation of the growing levels of autonomy for women. Similarly to 'Mlle La Comtesse De Florence', certain aspects of the image have been composed using a greyscale sketch effect, showing the parallels between the classical era and the contemporary period we find ourselves in. Through the illumination qualities of the image, the viewer is led to focus on the supposedly huge leap that feminism has brought; but to what extent can we submit to this ideal? 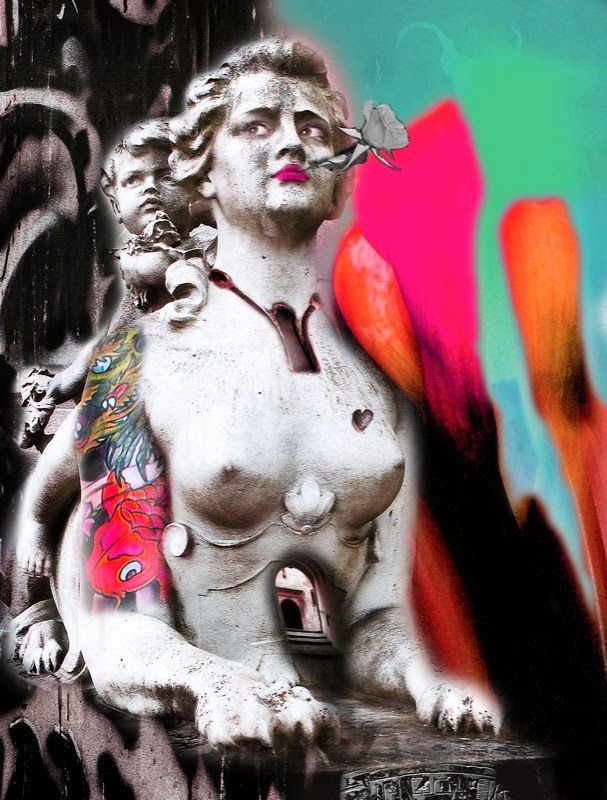 'Gate Keeper of Dreams vs Red' by Stephanie Mackenzie
Image courtesy of www.gxgallery.com

If it is geographically impossible for you to reach the GX Gallery before Mackenzie's first ever solo exhibition in the UK closes on 27th March, click here to view all the pieces that the gallery are currently showcasing. I have only given a brief overview, so by following the link you will see that the artist's work is vibrant, contemporary and colourful - definitely worth a gander.