Not to be confused with the OXO Bargehouse Gallery, which is incidentally opposite this exhibition, the Gallery@OXO, SE1, is located within the iconic OXO Tower. Its current exhibition is in partnership with the Women's Interfaith Network to promote female representation in the contemporary art world. As the organisation's name suggests, the aim of the exhibition is to promote diversity through the rich array of female artists around the world and what have to offer.

One of the most striking pieces in the exhibition is Miranda Sky's 'No, I'm Spartacus', a small enamel sculpture challenging the gender stereotypes of what is expected of women, through protest. Evidently, the pink paint being thrown over the traditional Victorian figure is representative of the twenty-first century women of the world, who are growing up with feminist values being instilled in them from an early age, as well as being educated about these further through education. There is a real motif within the exhibition which is both wholly and collectively examined, which is the issue of identity. While 'identity' is an extremely common theme in contemporary art, 'Spirit of Womanhood' and its featuring artists suggest that the problem lies in women not being able to express and develop their own identity to its full potential due to the effects of the bygone years of female subordination, trying to pitch women at a certain place in society, which is slowly being overthrown.

'No, I'm Spartacus' by Miranda Sky
Photograph of sculpture taken by Let's Make Lots of Monet

'Spirit of Womanhood' is clearly seeing significant success, as its stint at Gallery@OXO has been extended from its original closing date of 30th March to 6th April, and with a theme as strong and important as female representation and gender equality, it is easy to see why. Marking the tenth anniversary of the Women's Interfaith Network, the pieces have not been commissioned by the organisation, which makes the content much more interesting to the viewer, as we are able to see how these issues are interpreted and addressed by various female artists, both emerging and established. However what struck me about the setup of such a collection of work is this: is an exhibition with solely female artists conducive to spreading a message about equality in art? This is not necessarily a problem I have found with the exhibition, as I found it to be a largely educational and entertaining exhibition body of themed work; I am aware that such an issue is prevalent to many males, as well as females. Such an issue has surely been discussed and debated at length, and I would be interested to know other sides of the argument.

The fact that the Women's Interfaith Network have put on a multimedia exhibition is fantastic, as they are able to address the tastes of all art lovers alike, while prioritising their message. Bethan Arundel's 'Act Like a Lady' series is both poignant and startling. According to her artist statement, which can be found by clicking here, the images have been inspired by 1960s/70s feminist pieces. However, Arundel has used them to develop her own artistic practice through "re-appropriation of gender art", removing the gendered features of women to observe the effect it has on the viewer. Interestingly there is the additional imagery of striving for perfection, which is generally a very contemporary female concept. Arundel uses the lack of said features to pose the question of how such things make us different from men. 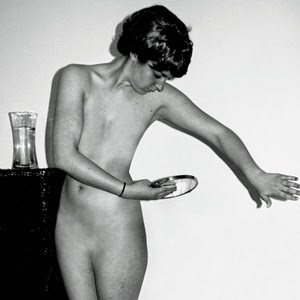 Single image from 'Act Like a Lady'
Image courtesy of www.bethanarundel.co.uk

In addition to gender claims and ambiguity, the model of female cultural diversity is also addressed within the exhibition, in keeping with the work of the Women's Interfaith Network. So while it is made clear that there is a great lack of female artists in the canon of admired art, it is even more rare to find exhibited work by women from ethnic minorities, except as a part of exhibitions like this, where such an issue is being highlighted. Sally Faure's 'Une Fenêtre' addresses this directly, led by the eye contact made by the female protagonist of her painting. As a French artist, the theme of Muslim representation is a potent yet sensitive issue, due to the secularisation of the state. Faure speaks of her 'Ethnicity' series of pieces as depicting the "general fracture of our modern society". To many viewers, Faure's piece stands out as the most explicit in addressing cultural diversity in the exhibition, however if we consider the topic of the exhibition, it becomes clear that Faure wants to express women's freedom and lack thereof in one single image. There is a constant debate over the freedom of women who wear burqas, however it is very rare that we hear the voice of the Muslim woman. 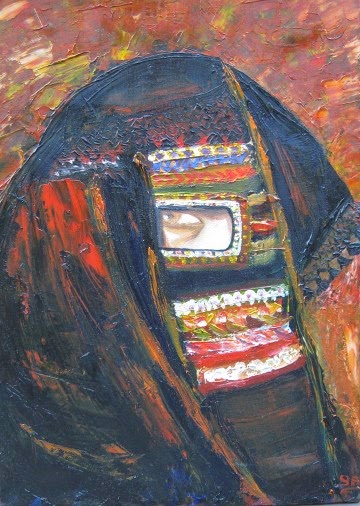 In an exhibition that includes both Western and minority artists, it is important for viewers to realise, which they will in the duration of this exhibition, that the implementation of female artists in the canon and art institutions is not as straightforward as it might seem, and this may take several generations to conduct in full. The calibre of work in this exhibition is incredibly high; it is somewhat ironic that the gallery is neighbouring some globally recognised art galleries and museums, as you will not find as much unadulterated passion in many of such exhibitions as you will find in 'Spirit of Womanhood'.