Update: Beach London has now re-located from Shoreditch to Camden.

As far as hipster-pop-graphic art goes, Shoreditch in East London can always be relied on for presenting the best of such a category (if by some bizarre portion it exists). Beach London, E2, is no exception to this ideal, and currently they have a collection of work by a graphic artist famed for his work with Polar Skate Co.  (hopefully that means something to some of you; sadly not my field of expertise) But here, in 'Sick Emotions X-ibit', we have something of a social satire in the form of Ovgren's trademark comic cartoon drawings.

Due  to the nature of the artist's work, it is certainly beneficial that Beach London has an inherently calm, uncontrived ambience. The pieces are small in size, other than the oversized child holding a rather disconcerted looking beach ball over his groin area. Something that is particularly enjoyable about this exhibition is Ovgren's personification of objects. As he depicts humans through the perspective that he sees the world, the vitality of inanimate objects allows the viewer to observe the scenarios in Ovgren's work with the outsider perspective of such an object. The first piece of work in the exhibition I would like to address is 'Dinner is Ready (Dad isn't Coming)', pictured below, a fiercely sexualised drawing depicting what appears to be a silenced sexual oppression. The instantly recognisable phallic imagery, along with the severed hand on the barbeque, suggests a violent passion that has been sated. I appreciate the real value of Ovgren's work, as what seems to be a collection of playful, universally simple cartoon drawings soon evolve into something far more complex upon closer inspection. There are multiple possibilities for 'Dinner is Ready...', when we bring into question both the singular leg we can see and the huge black wrestler's helmet that the protagonist is wearing. 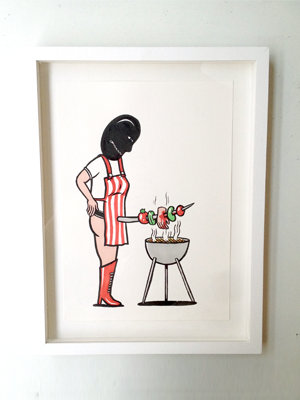 Ovgren employs the method of luring viewers in with the false sense of security with a bright, childlike colour palette and animated facial expressions from his characters. Doing so ensures even more of a sense of shock when the viewer interprets the true message beyond the pictorial element of his work. In addition to this side, there is a strong narrative to each image in the 'Sick Emotions X-ibit', rarely moreso than in 'Untitled', where the various autonomous scenarios within the one painting collectively form such a narrative. One of the most startling aspects of this image (there are many...) is the role reversal between the infant characters and the adults, which plays out similarly to a smuttier Beano comic. Disguised by its use of toilet humour such as a child urinating on his father's face, there is a certain undercurrent theme of neglect to be found in some of Ovgren's art, especially as, while urinating, the boy's speech bubble exclaims: "This is for not being a dad!" There really is so much to observe in this chaotic yet neatly presented image, including the parody of pre-pubescent sexuality, illustrating a young boy placing his penis inside what appears to be a conch shell, before declaring: "you're my girlfriend now". 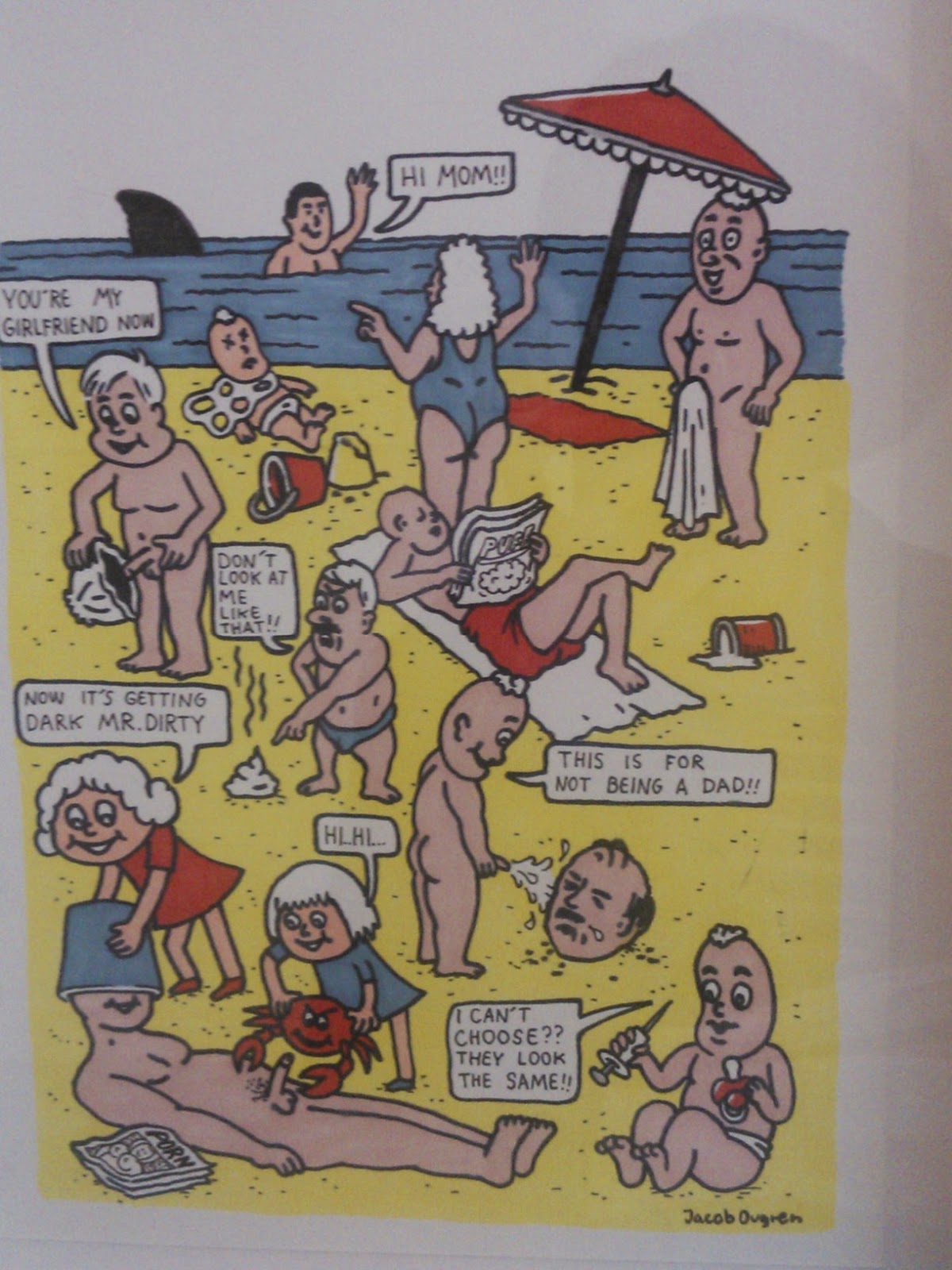 The core themes of 'Sick Emotions X-ibit' appear to be crude sexual depictions and somewhat dampened horror and brutality. 'The Ride For Revenge' is an image that seems to combine the two elements in order to produce maximum impact. The large, comically sized phallus has once again been personalised with a human expression, which depicts a certain angry malice as it has been boarded by three of Ovgren's characters: another oversized baby in relevant clothing, an old woman and a young man, showing the ambiguity and possibilities within sexuality, yet at the same time with the ominous penis being able to dominate the image. 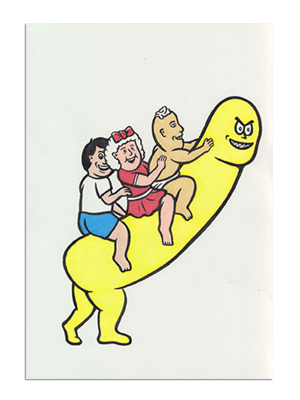 'The Ride For Revenge' by Jacob Ovgren
Image courtesy of www.beachlondon.co.uk

Something that really shines from Ovgren's pieces in this exhibition is how he highlights the commodity culture and excess that is plaguing the West. A piece that cannot be ignored in this light is the comical 'OoohhhOOH Burgers', charting the 'First World' obsession with food to the point of a sort of chauvinism by depicting a woman pleasuring herself while regarding a book of 'Fast Food Cooking'. Ovgren manages to illuminate issues that are actually more diverse than the viewer first realises. The artist uses a variety of characters and scenarios in order to encompass as many viewers as possible. According to recent statistics, men and women over the age of seventy are having more sex than ever (?), and he is certainly incorporating such a liberal attitude and presentation to his work.

Different attitudes to sexual activity are often addressed by artists, but Ovgren's techniques allow the viewer to focus attention on what lies beneath the initial visual impact of the painting. For instance, with a title like 'Your Naked Body is Perfect For Falling On', pictured below, the artist is well aware that such an image and title combination will cause the viewer to consider the potential complexities of his or her work. This image implies the sadistic nature of both relationships and sex, expressing both pain and pleasure. Perhaps the artist has used two obese characters for (ahem) impact and hyperbolic value, which seems to be an effective tool in what I have seen of Ovgren's work; the aesthetic value is achieved with simple line work and untroubling colour schemes, so that deeper contexts can be explored while still appeasing the eye of the viewer. 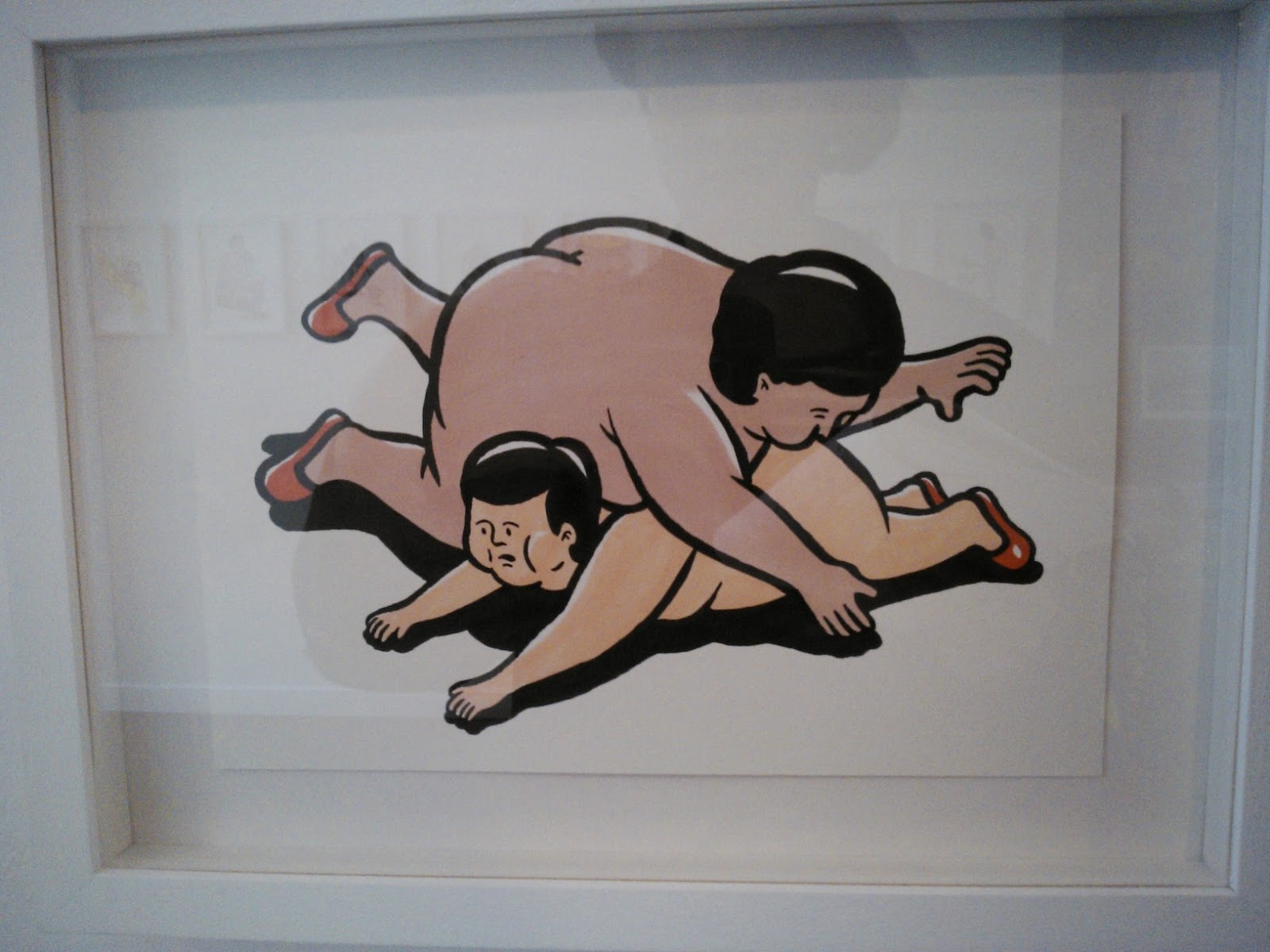