Waterside Contemporary: Ariel Reichman 'Who Distinguishes Between Light and Dark?' (until 22nd March 2014)

In the heart of Hoxton, Waterside Contemporary, N1, is exhibiting the first UK solo exhibition from South African artist, Ariel Reichman, whose practice spans various media including installation and photography. Excitingly, the gallery's press release states that the artist "rejects the perimeter of the gallery, leaving all walls empty". This is a key, visually evident feature of the exhibition; the stoic white walls allow attention to be drawn to the minutiae of Reichman's pieces.

In complete isolation is the artist's video installation, 'My Mother, You See, She Doesn't Know How to Use a Lighter'. Its organic sound effects dominate the entire gallery, accumulating a force that creates anticipation until the viewer arrives at the booth-like environment. As a whole, the exhibition is rather avant garde, and, other than the sound from the video piece, the blank white space broken up by several pieces is haunting. It truly does feel that Reichman has gone beyond 'rejecting' the gallery, but in fact has wholly abandoned it. Alas, back to the video. 'My Mother, You See...' plays on the thematic metaphor of light and dark, in a piece that shows the artist's mother attempting to use a lighter effectively. For me this is a powerful few minutes of footage, as it seems that Reichman is showing us how we can control and determine the power in our own lives. The constant struggle, and sounds of exasperation, of the artist's mother signifies how something that is a simple task for one of us can be a great difficulty to another; as a society we need eachother in order to be supported and enlightened. 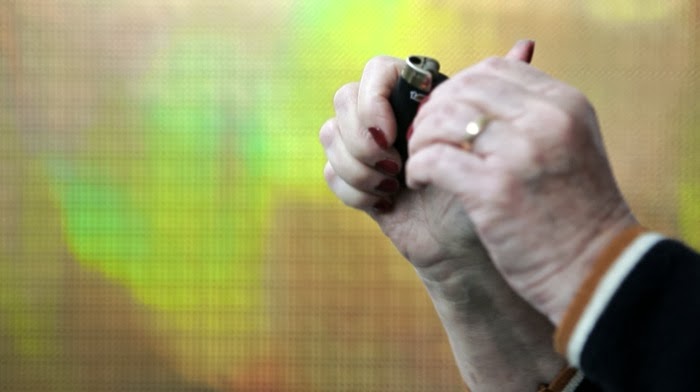 Still from 'My Mother, You See, She Doesn't Know How to Use a Lighter'
Image courtesy of www.waterside-contemporary.com

Other than the purpose-built area for optimum viewing of the aforementioned video, as I have already said, the gallery is otherwise fairly blank. This is an effective technique in allowing the viewer to interpret Reichman's works as we see suitable. The artist's tiny sculpture piece, 'Burned Stone' evokes large feelings of loss and death, especially as the viewer must approach it at close proximity to regard it properly. Waterside Contemporary's press release states that Reichman's work is "an invitation to cross from one mental state to the other", and it must be said that the artist does seem to throw his viewers between varying degrees of tranquility and stimulation. In its sober isolation, 'Burned Stone' is again reminiscent of the exhibition title, in that all at once, this stone seems to be the epitome of the darkness to which Reichman refers. Against the white of the walls, the black stone basks in its own melancholy, with a silent whisper that demands the viewer's attention. 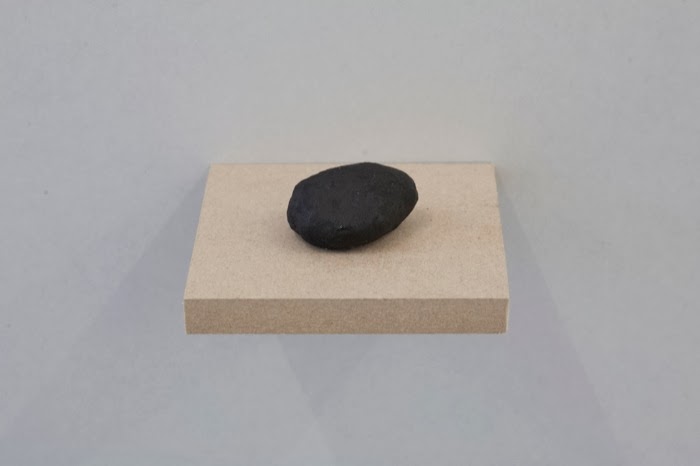 
The exhibition as a whole and as separate entities fascinates me, especially as I began to look deeper into the ideas of Reichman and what he could be inferring. However it is his selection of works titled 'Electric Fence' that really caused my confusion. Again referring to the press release, the artist expresses the conditions of "negation, invisibility [and] permanence". Here we find the binary or rhetoric effect of support, which seems to be a recurring motif in this collection of Reichman's work, where the permanence of black against white and vice versa shows how as people our identity is fabricated due to the impact of the different people and places in our lives. As the rhetorical question of the title suggests, it is not always possible to decide who makes an impact on our lives and to what extent they do this. For me, 'Electric Fence' is a piece that I would enjoy learning more about through other people's interpretations. 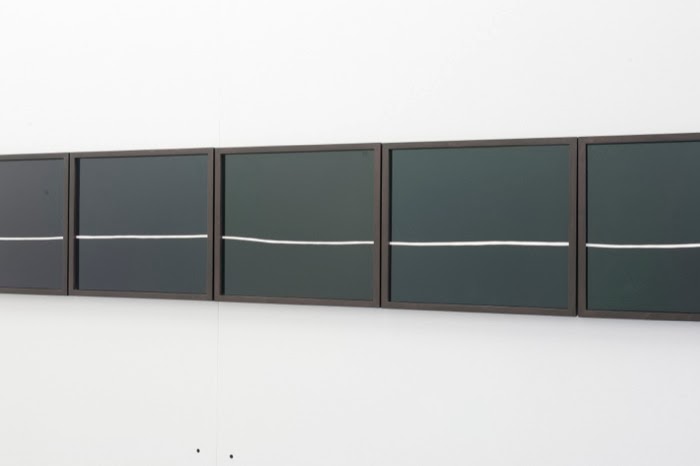 As there are not many individual pieces in 'Who Distinguishes Between Light and Dark?', I will finish with discussing Reichman's 'Curtain', which is comprised of two small images presenting the opposite sides of eachother. Intriguingly, they form a shape that resembles a facial construct, again emphasising the binary contrast (light/darkness) which can also be translated to human/behavioural theories. Needless to say, I am neither an anthropologist, sociologist nor psychologist so I cannot venture into this as deeply as I would like, but on a very basic level, we have all experienced split personalities or moments with contrary, or hypocritical, ideas or opinion, and almost all of us will at some point identify this within ourselves. When art is able to communicate values from other fields into a visual representation, the discussions and ideas that can flow from them are endless. 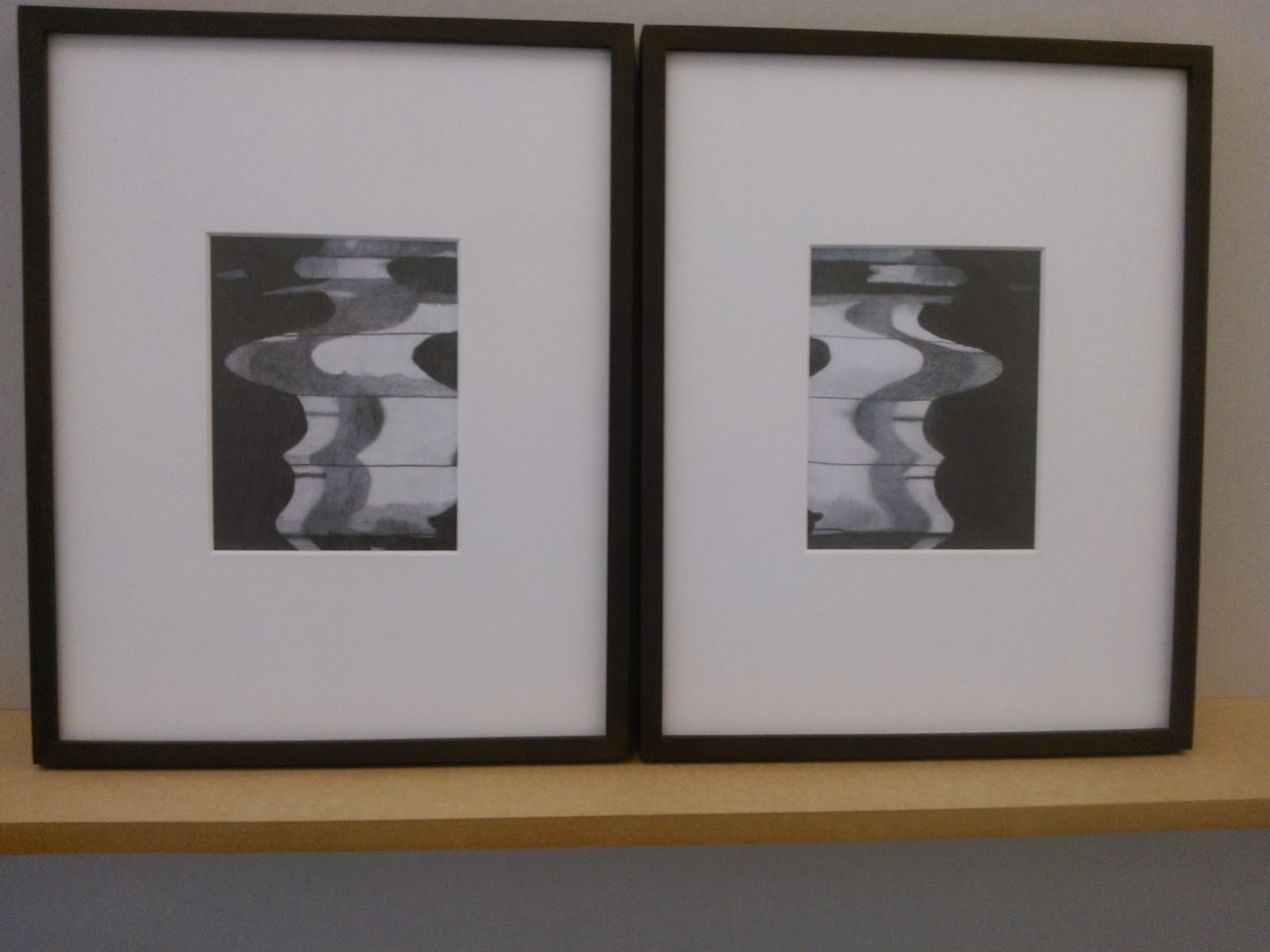