Update: The Montage Gallery is no longer functioning as a gallery space.

Love is (still...maybe) in the air, and on my second visit to the welcoming Montage Gallery, SE23, I encountered their latest exhibition, 'Love It!', which promises different perspective on love by local and international artists, centred on the focal point of Valentine's Day. However what we find is a crude, amusing outlook on what to some is a poignant and romantic occasion, but to most is an excuse for sexual pleasure and gifts.

The gallery itself exists in a way that makes the viewer feel like they are intruding on someone's apartment. However this is a positive attribute, allowing the viewer to think autonomously about the works on display, without any pretenses or forces. The first piece I encountered during this visit was Daniel Gonera's 'Object of Desire'; a self-proclaimed "enthusiast" rather than professional photographer, his image is highly thought-provoking, especially in relation to the exhibition's title. Gonera appears to be addressing the fetishising of the human form. As the object in question is lifeless but also genderless, this suggests a utopia of gender and sexual equality. Interestingly, the artist's profile, provided in the exhibition, states that he is merely a "casual observer". This is a revelation that allows us to see the moment in its natural state without being contrived. Our analyses of the photograph are even one step ahead and deeper than the subject of the photograph, which is a beautiful addition to a candid, momentary image. 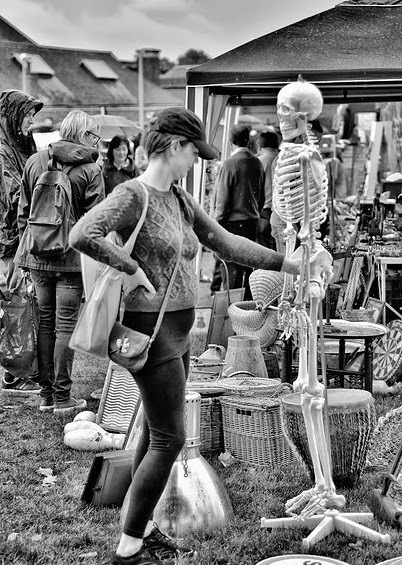 'Object of Desire' by Daniel Gonera
Image courtesy of www.themontage.net

As the viewer walks around the leisurely setting of the gallery, we are able to appreciate the division between artists; while they all adhere their work to the exhibition's theme, they present their thoughts in such distinctive, diverse ways that 'Love It!' feels both fragmented and decidedly whole at once. An artist who attracts the viewer due to both controversy and decorative value is Andrzej Maria Borkowski, who has many pieces currently being displayed at the gallery. One of Borkowski's works that stood out for me is 'Be Wild', a sketch and red print showing a woman kissing a devil passionately. This is a red print version of another of the artist's pieces, 'Wild Kiss', which is significantly more unnerving to the viewer as the realistic colour palette enhances the fact that a woman is embracing a devil character, which appears more ambiguous in 'Be Wild'. The majority of the viewer's difficulty with the image lies in the fact that the artist wishes to relate to his audience. While some artists may provide an idealised vision of love, Borkowski shows the enveloping of the pair with the red signifier for passion, and the trouble this will inevitably lead to. 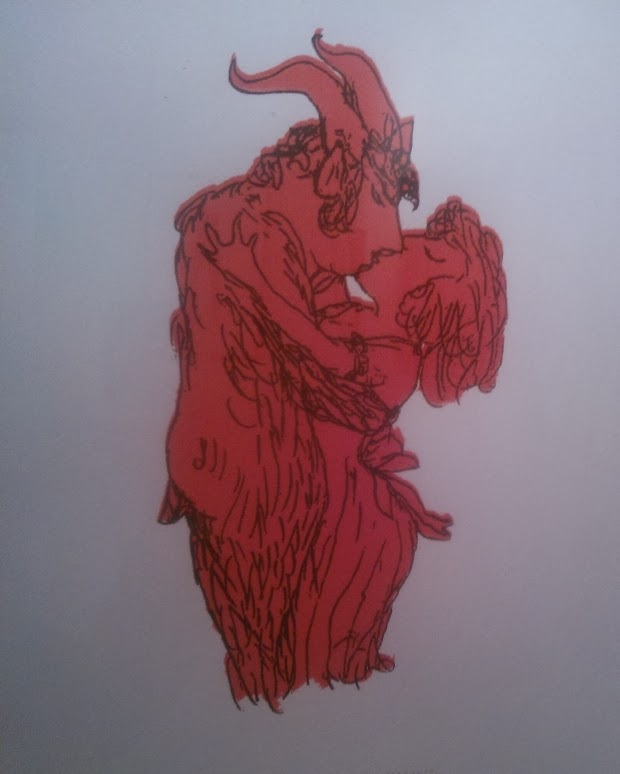 It is safe to say that this is the point where the exhibition takes a different turn, into the adult and the sexual. Artist Monika Beisner presents her unadulterated, unashamedly blunt outlook on sexuality to the extent where she is almost parodying it. In her image 'Peleus and Thetis', which draws in the viewer from across the room for obvious reasons, we are reminded of Greek mythology, where Peleus learns how to overcome Thetis' ability to metamorphose before marrying her. From the image, the viewer can decipher the dominant patriarchy and the standard male supremacy that taints heterosexual relationships. It is impressive that such a context can be expressed in an otherwise comical, hyperbolic initial image. 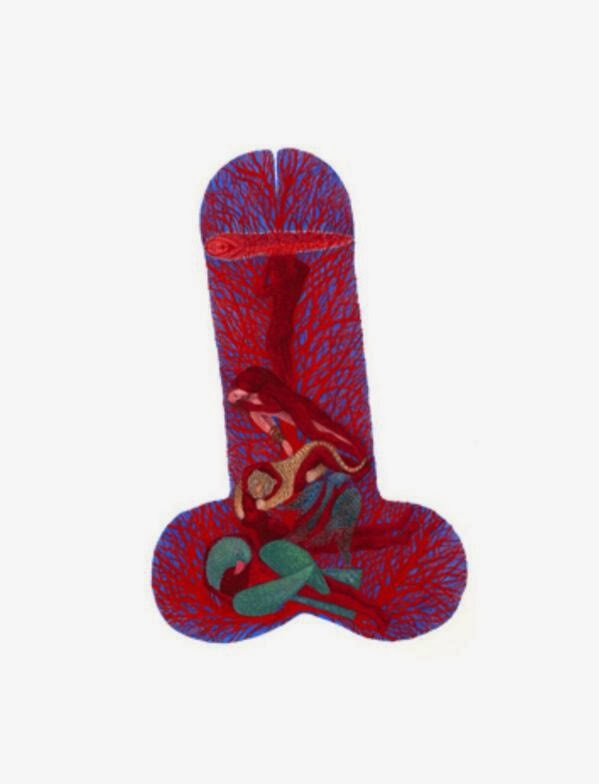 'Peleus and Thetis' by Monika Beisner
Image courtesy of www.twitter.com/the_montage

Something that cannot be ignored at the exhibition is Pawel Wasek's installation, 'Bad Time Story', which appears to play on the idea of nightmares. Again referring back to the exhibition theme,  this disturbing piece addresses the other side of 'love' and sex, with a clear link to fertility, perhaps unwanted or an inability, something which disturbs us. 'Bad Time Story' is truly sinister, and the fact that it is unexpected amongst the other works of art enhances its ability to be so. The first photograph I took of the installation, below, looks inviting, and with the exhibit's theme of love, it is easy to pitch several ideas that would be appropriate, however Wasek has challenged our preconceptions about love and the marital bed, and it becomes clear that the artist is conveying his cynicism surrounding it, with the use of synthetic cockroaches, which immediately evoke the feeling of claustrophobia and unwanted intimacy. 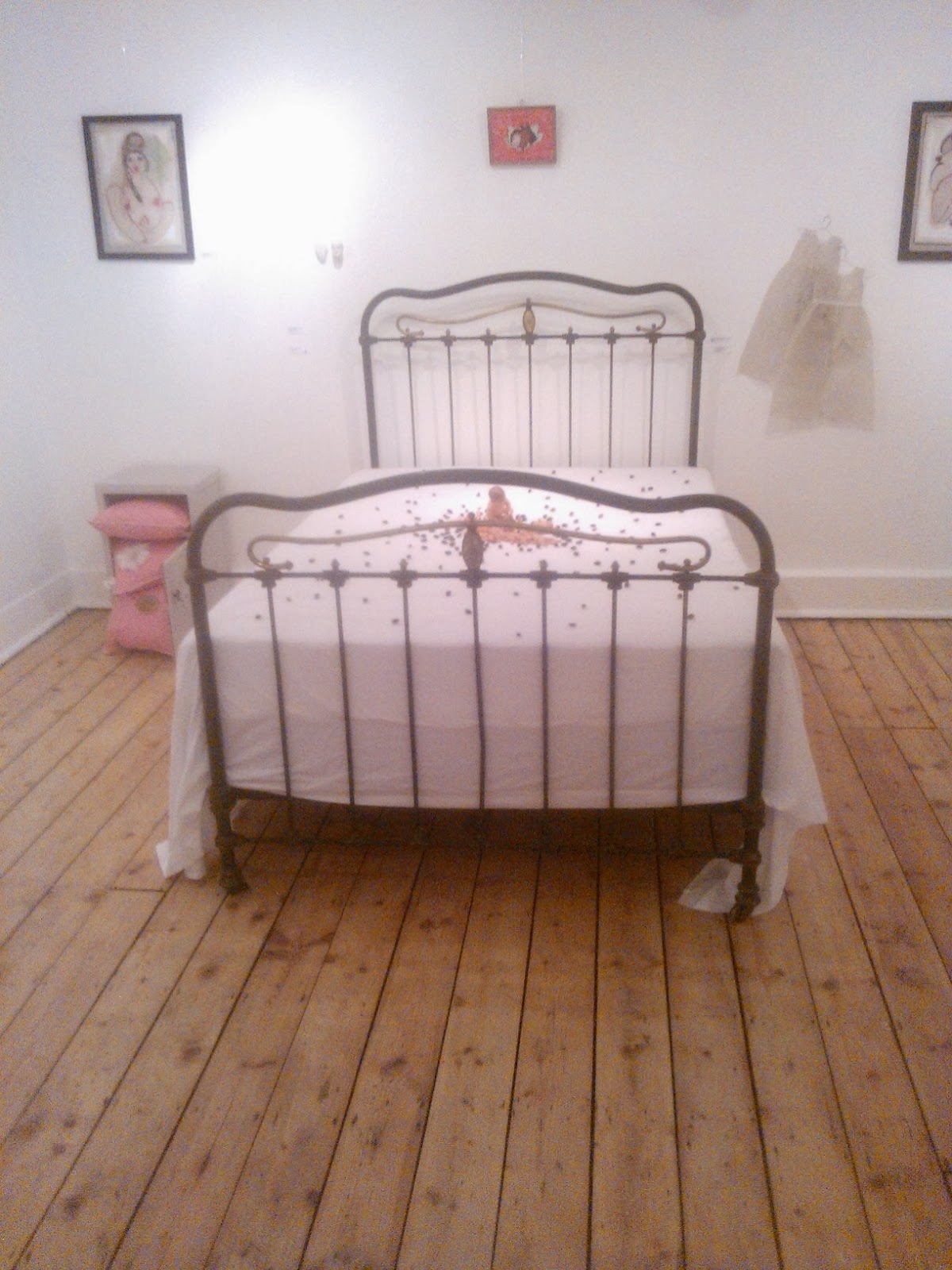 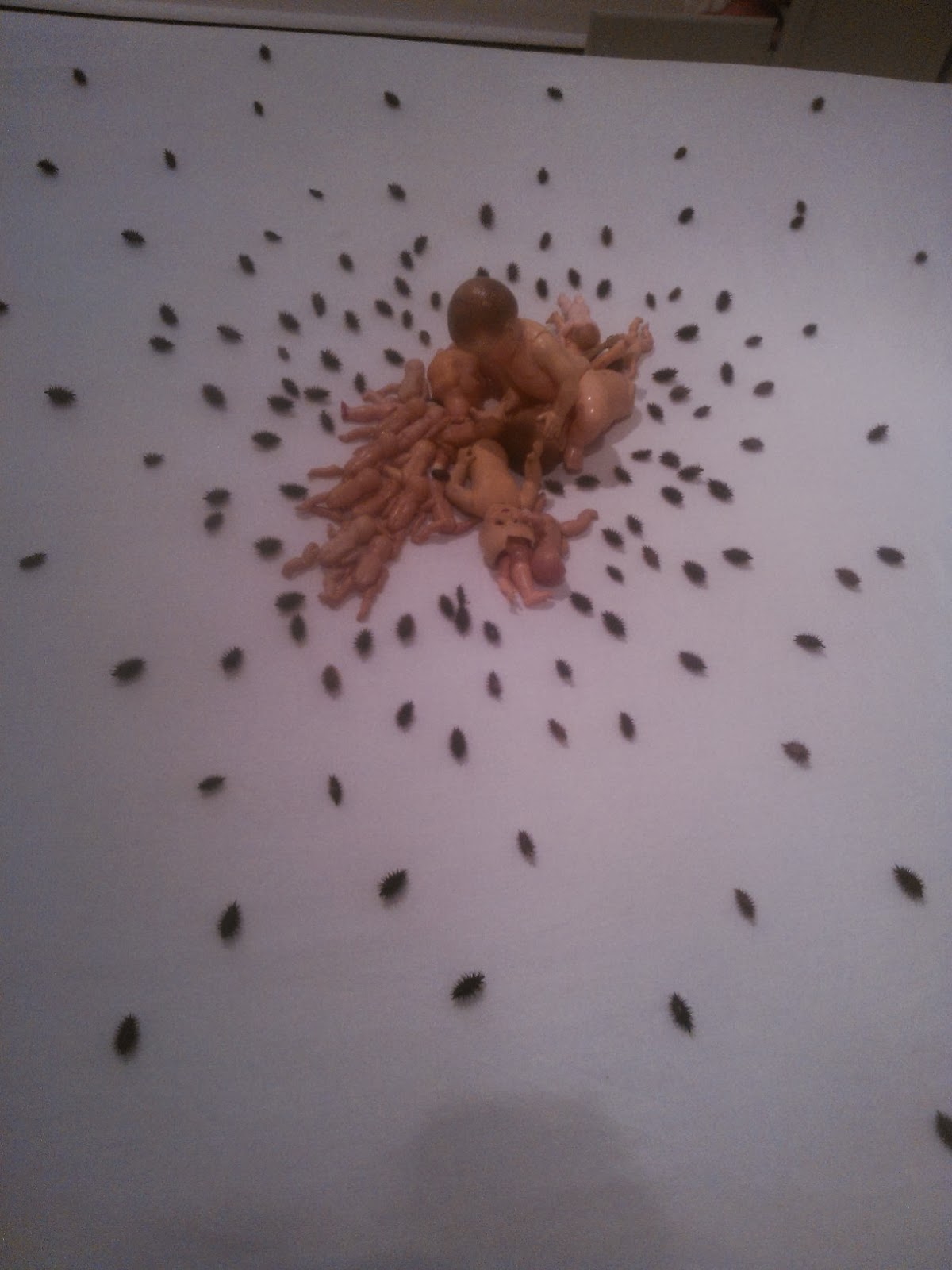 As is clear, The Montage clearly want to cater to both the cynics and the hopeful with this exhibition, yet they are doing so in an abstract way, that makes the viewer almost forget about its central theme. Beisner's work in particular impressed me hugely, as her pieces are a visual spectacle, but with much deeper foundations: personally, provocatively and contextually. The exhibition is certainly worth a visit, before its closure on 24th February, if you would like to avoid monotony and cliché of Valentine's Day with a refreshing outlook.