Detouring away from Marble Arch, and the hustle of the constant stream of tourists, lies the small but beautiful Gallery Elena Shchukina, W1K, where Scottish photographer, Allan Forsyth, is currently exhibiting his latest collection, 'Vivid Light'. Upon entering the gallery, the standard and characteristics of Forsyth's work are immediately established, and the poignant beauty is impossible to overlook.

The curation of the exhibition is not as one would expect, indeed it appears that two 'chapters' of 'Vivid Light' have been formed. Similar images, primarily the 3D lenticulars, generally do not have a specifically constant subject matter yet are presented in a very similar way. These images are not displayed simultaneously, but split between the two floors of the exhibition. One of the images that makes a large initial impact is 'Tranquilizer', a large-scale (120 x 80cm) motion lenticular image, which excitingly progresses with the movement of the viewer. The rich, high-definition beauty of 'Tranquilizer' is intricate and envelops the viewer, due to both its size and vivaciousness. Forsyth's colour choice of both rich and crystal hues of blue emphasise the values of life and the earth, with movement showing progression but not ageing, which suggests the consistency of life. 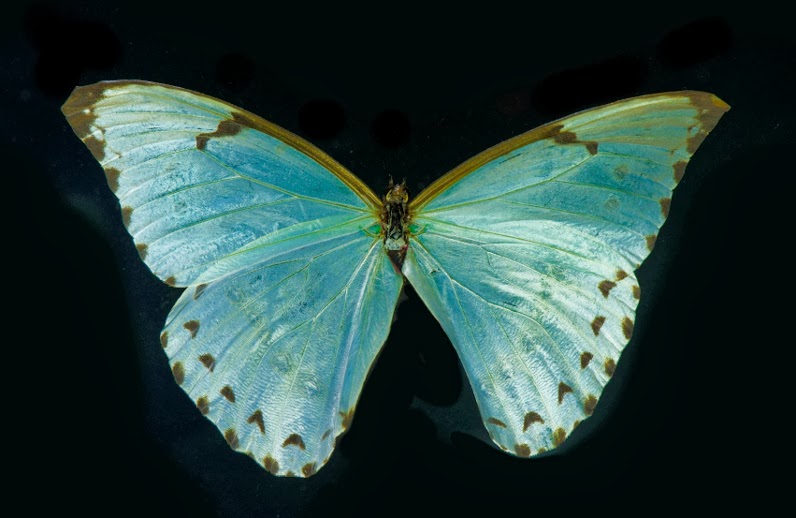 The exhibition, occupied primarily by both 2D and 3D-effect canvases, is broken up by one or two small installation pieces, including 'Sicis Red Settee', a real sofa with a rich red tone that invites the viewer in to the extent that you feel inclined to take a more active role in viewing the piece. Texture is hugely important for such an installation, and the velvety red evokes a strong feeling of passion, romance, intimacy yet also comfort and security. As the images of the exhibition are both consistent and connected, the images allow the inclusion of the viewer.

Speaking of the curation, which seems to be more significant than that of the average exhibition, the second 'section' of the ground floor has a positive, almost to the extent of being utopian, recurring theme and atmosphere. Although Forsyth's work has a strong focus on the natural world, this seems to be reinforced most poignantly towards the back of the ground floor of the gallery. Works such as 'Pull Through' convey the idealised view of nature, featuring aesthetically pleasing flowers and butterflies.  The title and content of the image are not necessarily coherent, implying that there is more beyond the initial visual impact of the image and this is the question offered to the viewer. 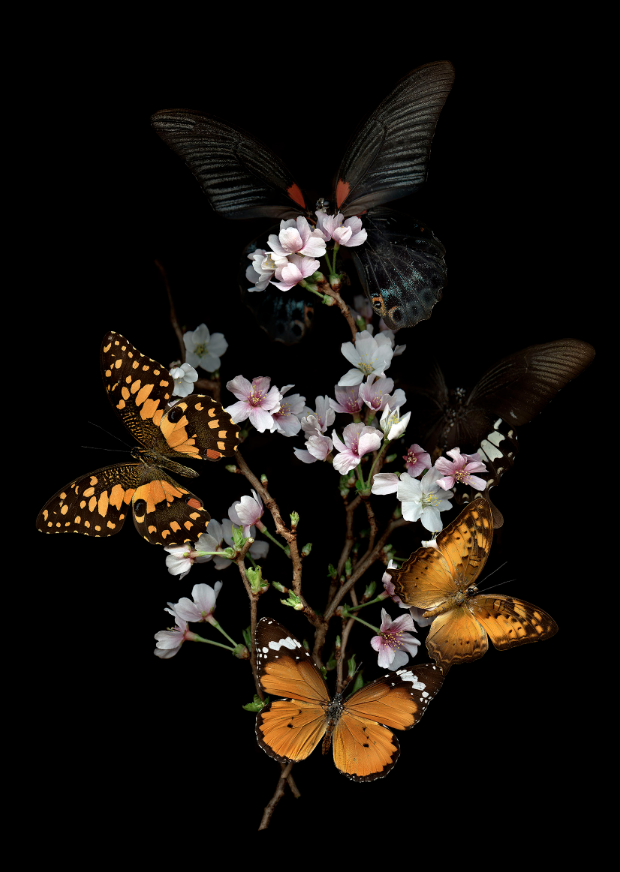 'Pull Through' by Allan Forsyth
Image courtesy of www.afternyne.com

I could not write a review about Gallery Elena Shchukina's current show without mentioning Hans Kotter's 'Tunnel View Down Under'; I for one have never heard so many visitors to an independent gallery ask whether they can take a photograph of a work (many were selfies against it - I won't comment as to whether I resisted the temptation or not). A beautiful ensemble of neon lights within a 2D mirror creates the illusion of falling down the rabbit's burrow in Wonderland. The piece really is a spectacle, and provides quite a major distraction from the rest of the exhibition. Having looked at other pieces of art by Kotter, it is evident that he has an affinity with the fantastical display of neon lights, purely hypnotising the unsuspecting viewer. 'Tunnel View Down Under' certainly resembles a film in 3D, and while it adheres to the movement of other works in the exhibition such as the aforementioned 'Tranquilizer', by conveying a multi-dimensional image, Kotter's piece really is in a league of its own. 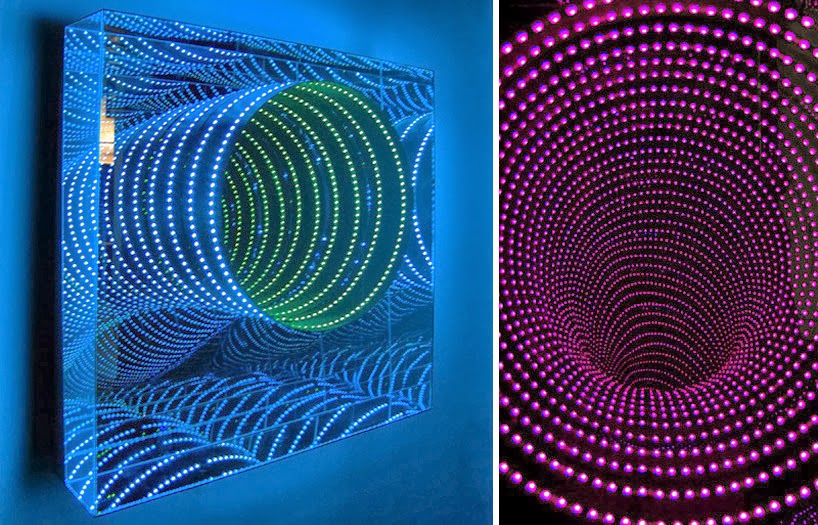 Two viewpoints of 'Tunnel View Down Under' by Hans Kotter
Image courtesy of www.designboom.com

In the basement floor of 'Vivid Light', having been entirely overwhelmed by 'Tunnel View Down Under', I couldn't comprehend what another stage of Forsyth's work would bring. Unsurprised but not disappointed, the status quo of the quality upstairs is maintained. In the accompanying booklet to the exhibition, the gallery's director and namesake, Elena Shchukina, states how she aspires for an exhibition space that "become perfect living spaces; places that are uplifting, yet also make you feel at home", and not many visitors to the gallery will argue that this ethos has been achieved. Unlike many, arguably more pretentious, art spaces, there is clearly a high decorative influence on which artists are selected to exhibit, in addition to deeper meanings.

So with the basement, it seems like pieces have been placed there to conclude and secure the foundations of the exhibition; however I would be tempted to assert this with the exception of Forsyth's C-Type metallic print, 'Sun Grazer', which seems to add a new angle to the photographer's repertoire, albeit perhaps too late to truly capture the viewer's attention to his cause. This review is concluded with said image, and the declaration that Gallery ES is a stunning, intimate yet young gallery, with the best intentions to find contemporary art that has both depth and aesthetic beauty.