When an exhibition boasts top female artists such as Louise Bourgeois and Tracey Emin, placing them in a museum as opposed to an art gallery is an intriguing, with the potential to be difficult, decision. So here is the Freud Museum, NW3, with its latest exhibition on 'Mad, Bad and Sad Women', focusing on the depiction of females in psychoanalysis and consequent art.

The museum wall texts state that, in his independent research and alongside clients, Sigmund Freud was interested in sexual desire in women, something that will of course stake its claim to justify the work of the likes of Emin and Sarah Lucas in the exhibition. Of course, interpreted in the right way, the works included have an affinity with the theme, however merely being a female artist seems to still be something of a novelty, which I'm sure other viewers will pick up on. In regards to its publicity, I believe that Freud Museum may have played too much of a focus on the contemporary art examples, perhaps to draw a wider range of visitors, as there is not such a vast range of such works.

But firstly, as the viewer begins their trail through the beautiful house in Finchley Road, we are met, in contrast to the rich, traditional setting of Sigmund Freud's final home, with two vivid, eye-catching works of art. The first, which the viewer finds truly impossible to ignore, is Isa Genzken's 'Untitled', pictured below. With the face of a terrifying zombie wearing a wig, Genzken's piece sets the foundations for what the exhibition represents in the paradox of female representation. Between the proper, kept woman and the sinister figure that is often conveyed, usually through the image of Eve and the Fall of Man, we are met with a range of social contradictions. 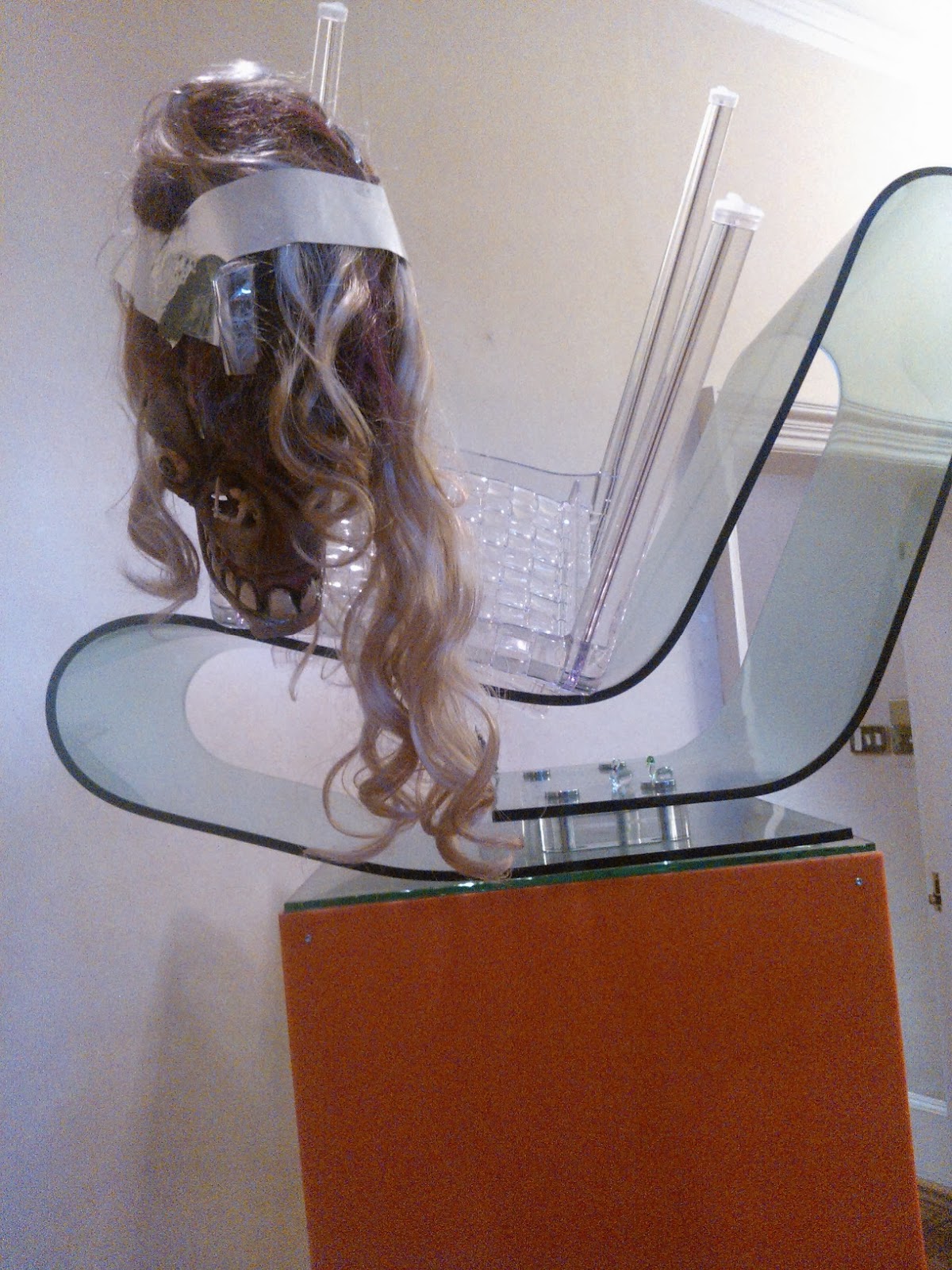 The curation is interesting, as the Freud Museum is, rather obviously, a museum, not an art gallery, so each piece is not displayed directly in relation to the next. Thus, it is exciting to make your way up the stairs to find Tracey Emin's 'Be Faithful To Your Dreams', a blue neon light installation that illuminates the entire space, in between the ground and first floor. This arouses excitement and anticipation for the viewer, creating mystery as to what awaits us as we explore the museum's collection. Evidently there is a certain expectation with the level of great female artists on display, giving a different perspective on the conventional museum style. Old, traditional forms, similar to the display of artefacts, with decisively contemporary pieces makes this a unique combination that many art institutions would not be courageous enough to attempt.

Before I address the various rooms which are part of the museum, I have to raise the display of Louise Bourgeois' 'The Fragile', which for me absolutely epitomises the message that 'Mad, Bad and Sad Women' is trying to convey. Taking many forms, the small prints represent the different ways that women are viewed in society/the patriarchy. There is a certain feeling that Bourgeois is parodying the male gaze, especially those which includes hyperbolic giant breasts, with little other detail, or blank, formless faces. Although saddening and almost comical at the same time, the viewer cannot help but to consider how Bourgeois' artistic representations show a daily occurence; the objectification of women is depicted in ways such as animalistic traits. Many readers will know that the artist is famed for her spider sculptures, and these continue in this work. For me, this seemed to represent the struggle to uphold the feminine ideal, which lies between motherhood, beauty, domestic duty and sexual consistency. In the guise of its elaborate display, the collection shows something that is much more deep rooted and prevalent than it seems. 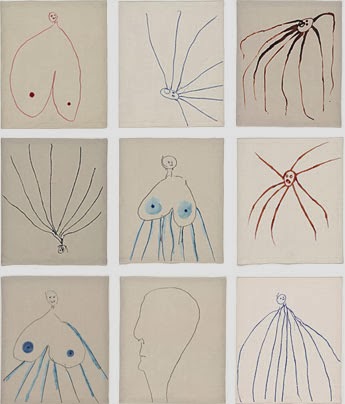 Selection from 'The Fragile' by Louise Bourgeois
Image courtesy of www.moma.org

The room given the summary title of 'The Asylum' is the first step of the exhibition. Given the location of the exhibition, in the home of the founding psychoanalyst, it is perhaps fitting that the exhibition begins with focus on the representation of women in the sphere of mental institutions. Interestingly, they have decided to display a 'straightwaistcoat', a straightjacket but, evidently, in the style of a waistcoat. Personally I couldn't help but feel uncomfortable about this, as it soon became clear that in years gone by, the image of the mentally unstable woman has been a very different one to that of the mentally unstable man. A 'straightwaistcoat' as opposed to a simple straightjacket suggests that a woman in an asylum is a figure for public amusement, much supported by the footage of the Anna Furse reproduction of the story of 'Augustine'. The female protagonist of the clip available shows signs of mental distress, such as irrational chatter, exposing her body, throwing her hair expressively and moving frantically and repetitively, all of which are characteristically inappropriate for the sane, domesticated woman, who would be expected to sate all such traits.

Beside 'The Asylum' lies 'Writing On The Wall', which provided insight into Sigmund Freud on a more personal level, stating that his personal interests in archaeology and mythology. Excitingly, it is claimed that he referenced these in his understanding of the universal human condition. The wall text of the room also cited the Surrealists, linking them with their ideas of dreams, releasing their 'inner psychological worlds' into the realm of art. Something I found particularly interesting in the first instance is the way Freud had a pioneering interest in the feminine desire and uncovering female sexual identity, something that has long been associated with insanity and, quite frankly, is still addressed in a rather taboo fashion as unnatural.