The Wallace Collection: The Male Nude (until 19th January 2014)

After much anticipation, I finally made a visit to the Wallace Collection, W1, to see its exhibition, 'The Male Nude: Eighteenth Century Drawings from the Paris Academy', where we are shown the apparent best from the Paris Academy, between the early seventeenth and early nineteenth century. As a small piece of context, while training to be an artist at the Academy, which was the unrivalled leading art school in France during this time, students would have to build foundational skills by taking life drawing classes, hence the material for such an exhibition.

Now to the Wallace itself as a location; it is a nationally recognised institution with an undeniably specific and small demographic of visitors, so the decision to exhibit a traditional style of European art is not likely to surprise anyone. As a seventeenth to nineteenth century equivalent of a Goldsmiths open studio event, there is a high level of quality drawing in 'The Male Nude'. However what attracted me to this exhibition is the idea of the male gaze, and that in order to satisfy this, the majority of nudes that are studied and exhibited now from that age are those of women. A collection of drawings from centuries ago which questions gender roles is bound to be interesting. Having some background knowledge of this, I considered that the curator may choose to address the homoerotic tendencies of the time, which of course were clandestine and taboo, but, alas, little of the sort.

To avoid any rash accusations or opinionated views, I will first address Hyacinthe Rigaud's 'Two Wrestlers', pictured below. Firstly, in an exhibition which consists solely of male life drawings, you would think that it might begin with a traditional, straightforward life drawing, of which there are plenty within 'The Male Nude'. Instead, what the viewer finds is 'Two Wrestlers', with a citation so offensively simple that I had to make a note of it, just for record. Now, as the viewing audience at the Wallace Collection are (how to put this?) what the Collection would like to consider educated, you'd think that they would devise a series of intelligent, engaging citations to enhance the viewer experience. However, in this evident reimagining of the Biblical story of Cain and Abel, we are told that the drawing 'suggests that this is actually a scene of combat or murder' with a ridiculous addition of '(Cain and Abel?)' thrown on the end. As the first image of the exhibition, I must say I was absolutely baffled, but continued on, perhaps in pursuit of an explanation. 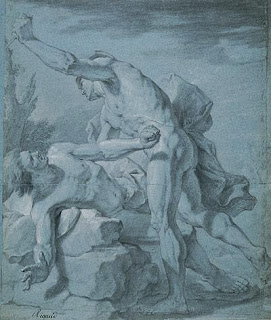 Another curatorial error, at least in my opinion, is the consecutive placement of sketches from the same life drawing session. This seems fair enough, but due to the high standard of artists at the Academy, and small room for manipulation, the possibility for any awe is reduced, as the sketches look extremely similar. In addition to this, rather unfairly, the viewer is able to view an impressive portrait by Anthelme-Francois Lagrenée, which depicts a powerful yet vulnerable physical positioning of the model, conveying an inherently male trait. At this point I began to have a more positive attitude towards the exhibition...until I reached the next drawing, which was of the same model in exactly the same pose. Interestingly this particular piece was by famous French painter, Jean-Baptiste Isabey, so again it seems bizarre to place such a valuable work next to a largely similar version, although personally I believe that the latter does outshine Lagrenée's effort.

As my initial interest in the exhibition lay primarily in the difference of the male nude in comparison with the female nude, I was excited by A. Belin's 'Man Lying Down with Raised Legs', which, although the model is in a contrived position, is more of what I was expecting, in its pose and by comparison. Below is Antoine Coypel's 'Man Lying Down, Legs Bent' as unfortunately I cannot track an online image of Belin's piece, however my ideas apply equally with this image. I must say that in visiting the exhibition I learnt that the male body was considered the 'ideal embodiment of beauty' at the time, and that it was a moral flaw to have women as life drawing models. I find this image, and equally Coypel's, to be hugely masculine, due to the attention to detail in the arm and torso muscles. In addition it also appears to be erotic, in a way that is more direct than the eroticism of traditional female portraiture. By having a strong leg mar the view of the genital area, the subject has preserved his power and dominance as opposed to an exposure, which would permit vulnerability. 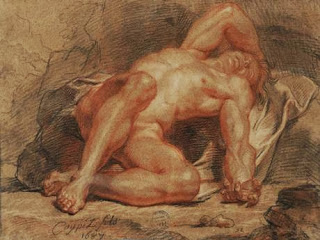 So although the talent of the Paris Academy's students is clear and undeniable, the composition and curation of 'The Male Nude' leaves the viewer wanting much more, which certainly lessens the potency of the drawings. It is a great shame, as there are some fantastic contextual details presented at the external front of the gallery room, preceding the entrance. However beyond that the citations are shockingly poor and for a national museum you would hope for something more, or at least something. They must have known that viewers would notice that after a few attempts at analysing some drawings, the curator has given up and presents nothing in addition to the image. 'The Male Nude' has received some positive reviews, but I am certain that I am not alone in feeling thoroughly cheated by this collection.