Branching out from my current research project on Japanese national art, I decided to pay a visit to the LA Noble Gallery, N1, for a different stance on the culture of the nation. Chris Steele-Perkins is a globally recognised photographer who has developed something of a specialism in social concerns. Born in Burma but raised in England, Steele-Perkins presents in 'Japan Suite' a collection of photographs, with a strong motif of traditional and contemporary conflicts. The photographs are very much touristic, and many would not be out of place as promotional holiday material.

One of the most visually stunning pieces is 'Child with Kite at Grand Spring Festival', pictured below. The viewer finds themselves instantly transported to within the frame of the photograph, taking the place of the child. The cloud of haze around the child epitomises the feeling of being young, free and boundary-less. A distant, vacant gaze on the face of the subject is captivating beyond description, as our attention becomes drawn to the toy kite, joining the focus of the young boy. Intriguingly, the adult figures in the photograph have been blurred and almost made anonymous by the foggy haze that frames the child, ensuring that the boy maintains possession of our attention, however much we may try to divert it. It is often easy to dismiss the true value of photography, due to its reproducibility and sometimes repetitive subject matter, but here Steele-Perkins contests such an idea with this engaging and beautiful image. 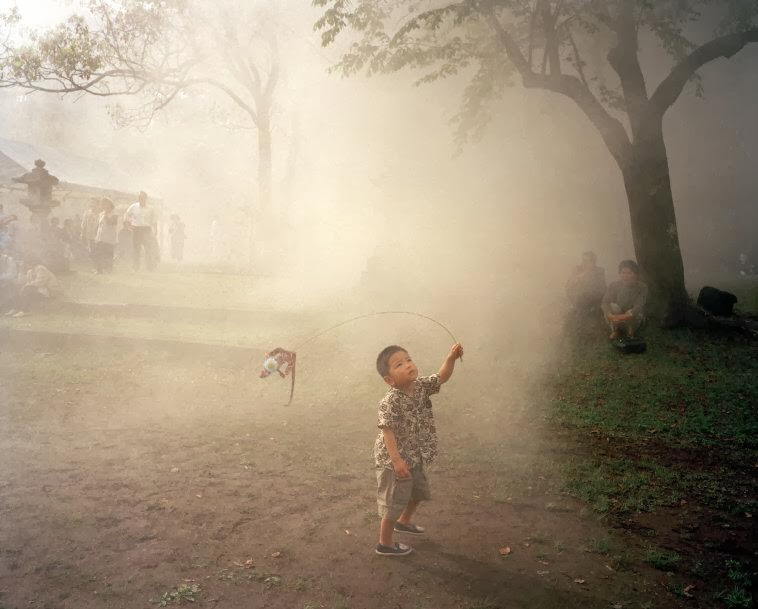 If you decide to visit the exhibition, which I highly recommend you do before it closes in a matter of days, you will understand that each and every piece is worthy of high analysis and discussion, however I must narrow it down, as it would not be right to list off the entire exhibition; the works must be appreciated within the environment of the gallery. The cultural conflict that I referred to at the beginning of my review is particularly prominent in the next photograph, 'American Village', pictured below. The two salient parts of this image are the background and the subject matter. Children dominate this photograph, much like 'Child with Kite...', however in comparison we are forced to consider their behaviour, as they are more active in the image. Although each piece in 'Japan Suite' has been taken in Japan, Steele-Perkins finds new ways to reinforce the idea of organic identity, and in the contemporary world, whether this has been preserved. Here it is the bright features of the background that draw us in. Personally, the human-sized hot dog, pouring ketchup on its own head, is symbolic of the indoctrination of media initiatives to children. In a globalised world, the melting pot of cultures is something we tend to embrace, however the domination of America seems to be a great concern of the artist. 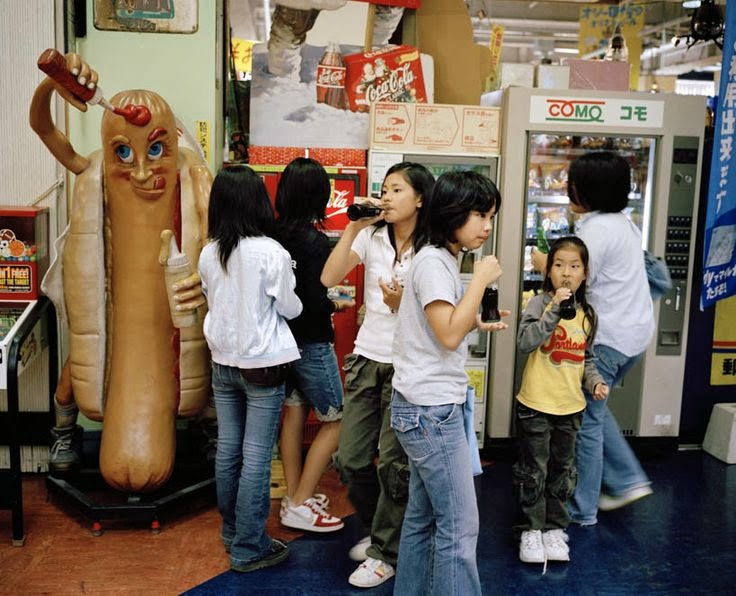 Conveying similar themes of conflict but differently, Steele-Perkins' photograph, 'Kyoto Gosho Temple and Gardens' attracted me, primarily for its simplicity, in contrast to the rest of the collection being so vibrant and busy. With its lack of life and activity, the photograph appears to be the least contrived (I do not know how casual the setup for the photographs were) and untouched by the consumerism and mass culture that seem to plague many of the other photographs of 'Japan Suite'. The aspect that puzzled and ignited the most interest in me was the angle at which the photograph is being taken. The photographer has not focused on a sacred, or particularly aesthetically strong, piece of this architecture. Is Steele-Perkins trying to hint at the naturalisation of religion in the postmodern world? Empty steps leading up to the temple could be inferred as significant in mourning the departure of traditional values as they are transferred into idolising celebrity culture.

Finally, I will discuss 'Pipe and Landscape', which again is a true-to-life image, this time with an urban setting, which, other than Tokyo, is not the world's archetypal view of Japan. This is a fascinating piece as there are no manipulations to enhance the beauty of the photograph. The grey and brown marks on the side of the large pipe convey the day-to-day functionalism of the city. That the pipe dominates the entire shot suggests that the artist wishes to show a side of the city other than that which attracts droves of tourists. On closer inspection, the viewer is able to see a small rusted dent in the central point of the image, near the top of the pipe. Then, as our eye drifts into the backdrop of the city, we realise that, although a subject matter which is not aesthetically pleasing, its function is relied upon by the city, and any damage to the system can affect millions of people. 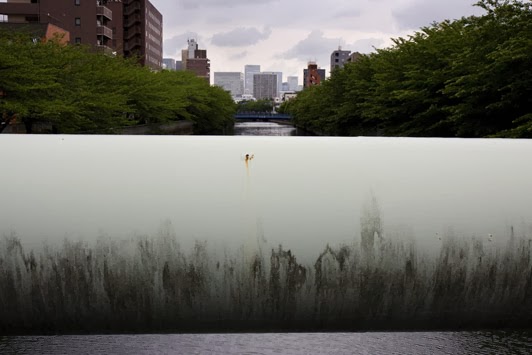 'Pipe and Landscape' by Chris Steele-Perkins
Image courtesy of www.japan400.com